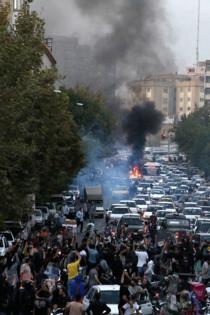 For all the legitimate concerns about privacy loss, the spread of misinformation and the like, one thing mass global access to the internet has done is made it ever harder for oppressive regimes to keep things under wraps.

Whereas once the Iranian government could have strived to keep images of widespread popular protests out of view and carry on as usual, nowadays even trying to block internet access hasn’t stopped the whole world from watching everyday Iranians from young to old, Sunni and Shiite, Kurds and Persians, take to the streets in anger. Every American who purports to revere freedom should cheer them on.

The spark was the shocking death of 22-year-old Mahsa Amini, who perished in murky circumstances last week at the hands of the fearsome morality police — who enforce the regime’s strict codes of oppression masquerading as a concern for decency. Even Amini’s surviving family remains unsure of what she is accused of doing and how she met her end, beyond the fact that she fell into a coma after sustaining injuries consistent with a beating.

The killing has fired up pent-up outrage, over the brutal religious code enforcers and economic stagnation and the continuously warped priorities of Ayatollah Ali Khamenei and President Ebrahim Raisi. Since taking office just over a year ago, Raisi remains focused on maintaining a traditional vision of social mores even as the public now demands a different type of leadership, one centered around creating opportunities and letting Iranians make more decisions for themselves, whether that’s a simple choice not to wear a headscarf or a greater say in political self-determination.

We know that the Iranians’ version of freedom won’t look exactly like ours, and that’s fine. We must buck up the people opting to take their destiny in their own hands and toss off the yoke of an anachronistic theocracy. We must also keep making it clear to Iran’s leadership that in the modern world, an isolated regime with an increasingly restive population will survive by instituting major reforms, or not at all.