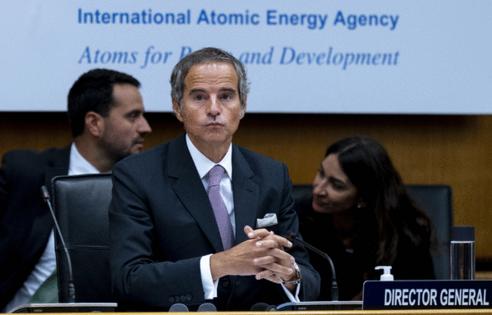 My husband joined the Navy in March 1999, and within 30 months we were engulfed in a war that would last the rest of his military career. When his ship pulled out of New York Harbor on 9/11, I never dreamed that we would still be at war when he retired in November 2020.

For nearly 20 years, we dealt with an intense operational tempo where he was gone far more often than he would have been in a time of peace. We saw friends come back from the Middle East struggling with the effect of burn pits, and I’ve lost too many friends and family to post-traumatic stress disorder.

While the United States has significantly lessened its military presence in the region, a conflict with Iran would put our troops in the region again, further straining service members and their families. However, we have a powerful tool in our toolbox that has proven successful and will defuse tensions: restoring the Iran nuclear deal.

As someone who has been on the front lines of the homefront during 20 years of war, I’ve seen the very real risks and consequences of military action. We can never be cavalier about pursuing military options, and diplomacy is our strongest alternative when facing global threats.

In 2015, the United States led international partners to recognize that Iran was on the brink of developing a nuclear weapon. The global nuclear community came together to use the power of diplomacy to stop Iran’s nuclear weapons program in its tracks with the Iran nuclear deal, otherwise known as the JCPOA. However, in 2018, President Donald Trump decided to remove the United States from the agreement over the strong objections of our global partners in exchange for a strategy of increased sanctions that he dubbed “maximum pressure.”

Let’s look at the facts: After the United States exited the agreement, Iran’s military spending increased by more than 50 percent, its activities in Syria and Yemen continued unabated, and the U.S. was brought to the brink of war when Trump ordered the killing of Iranian Maj. Gen. Qasem Soleimani, causing a 400 percent increase in attacks against U.S. troops by Iran-backed militias the following year as retaliation.

And even if you doubt the chances of America deploying troops to stop Iran from acquiring nuclear weapons (which I don’t think you should doubt), America has used diplomacy for decades to prevent the use and delivery of nuclear weapons. Treaties such as SALT, SALT II, START and New START have worked to impose limits on the world’s second-largest nuclear weapons program: Russia.

The JCPOA was revolutionary in that it stopped a bomb before Iran acquired it by requiring Tehran to provide 24/7 access to its nuclear facilities and supply chain, ship thousands of pounds of enriched uranium out of the country, and dismantle and remove all centrifuges — the equipment needed to develop nuclear material — that could be used to create weapons-grade material. And it put the breakout time — the time needed to produce enough fissile material for a nuclear weapon — at 12 months. Right now, the maximum pressure campaign against Iran has whittled the breakout time down to days.

A nuclear-armed Iran could rapidly become a destabilizing force in a region that is already a tinderbox. Re-entering the JCPOA is critically important for world stability, but it also sends a message to military families that our leaders are truly invested in preventing wars through diplomacy.

As a military community, we are tired. We all understand what we signed up for and are ready and willing to answer the call when needed. As a nation, we are tired of war, as is reflected in the historically low number of military recruits. Twenty years of war has left us weary, frustrated and losing faith in the institutions of the military and statecraft.

Our service members and their families, as well as the next generation of service members, need to know that our leaders are doing all they can to ensure that a stagnating war isn’t repeated. Our leaders need to do all they can in the diplomatic arena to demonstrate to military families of this generation — and the next — that they are invested in ensuring our families don’t have to fight a war that we can avoid.