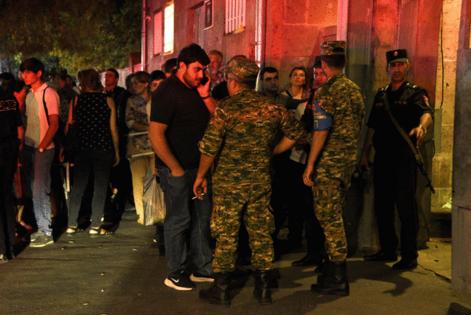 War is contagious. Instability breeds more instability when war destabilizes a regional power. This is what appears to be happening now to Russia’s south. From Armenia to Tajikistan, conflict and discord are escalating to dangerous levels just as Russia appears at its weakest point in its war.

With Russia overextended in Ukraine, states in Russia’s sphere of influence are predictably becoming less stable as those who have been under Vladimir Putin’s thumb see an opportunity to punch back.

Russia’s power projection has been a source of both meddling and stability across these regions. Even as he has stoked separatist movements in countries that he deemed too independent, Putin has largely succeeded in keeping a lid on major transborder conflicts.

A decline in Russian influence is as likely to lead to chaos as it is to a positive period of transition. Power abhors a vacuum. The most immediate danger comes from two conflicts that escalated just this month.

Armenia and Azerbaijan have had frequent border clashes, even before the Soviet Union collapsed. That conflict has typically centered on Nagorno-Karabakh, a contested area internationally recognized as part of Azerbaijan but claimed by Armenia. Conflict spiked in 2020, but Russia mediated a deal and sent forces to keep the peace.

Earlier this month, simmering tensions erupted into a shooting war. While both sides blame the other, the initial cross-border attack appears to have come from Azerbaijan, expanding the conflict beyond disputed territory into Armenia proper. Hundreds have been killed.

Armenia purportedly falls within Russia’s protection as a military ally under the Collective Security Treaty Organization (CSTO), a defense alliance led by Russia with six other former Soviet states. The failure of any CSTO state, including Russia, to come to Armenia’s aid suggests that alliance is all but dead.

It’s not likely a coincidence that Azerbaijan struck Armenia shortly after Ukraine routed Russia from much of the Kharkiv region.

Tajikistan also attacked Kyrgyzstan in recent days, even though both states are members of CSTO. The Tajikistan-Kyrgyzstan conflict also has deep roots in a long-standing border dispute, but the recent fighting marks a significant escalation as a sizable and premeditated operation. Nearly 100 people have been killed. While both sides blame the other, it was Tajik forces that entered Kyrgyz territory with tanks.

In other parts of Russia’s near abroad, anti-Russian elements see an opportunity to trounce Russian-backed separatist movements whose dependence on Russian troops makes them vulnerable today.

Transnistria is a quasi-independent region that broke away from Moldova in the 1990s with Moscow’s backing and depends on Russia for security. It also borders Ukraine. With Russia looking to relocate many of its scattered troops to the conflict next door, Moldova has its best opportunity in decades to reclaim the region. Moscow is aware and has openly warned Moldova not to move against Russian troops in the area.

Similar concerns have emerged from South Ossetia, a Russian-backed breakaway region of Georgia that also depends on Russia for military and financial backing.

The Georgian public has strongly supported a turn toward the European Union and NATO since Russia briefly invaded in 2008. But the ruling Georgian Dream party is close to Putin and has actively sought to quash opposition, reversing years of democratic progress and stymieing ties to the West. This shift was possible despite lacking public support, thanks to increased corruption and manipulation of the judiciary, all following the Putin playbook.

Georgia’s government has responded to public pressure to support Ukraine by calling for a referendum on whether Georgia should go to war with Russia. The government hopes the starkness of the question will secure a mandate from its restive public to stay neutral in the war and quell any ideas about ousting Russia from its occupied territories.

The discord between the government’s position and the public could lead Georgia down a similar path to Ukraine’s in 2014, when Ukrainian President Viktor Yanukovych, a Putin stooge, was driven from power after protests supporting deeper ties with Europe. He was later convicted of treason in absentia for doing Russia’s bidding. A weakened Russia could harden the Georgian public’s resolve, though it’s unlikely corrupt powers would quietly retreat.

For years, Russia’s foreign policy toward its “near abroad” has consisted of political and military interference designed to foster dependence, impede democratic movements and keep friendly proxies in power within former Soviet states. Indeed, it was the failure of these efforts in Ukraine that led Putin to invade, both in 2014 and earlier this year.

Thirty years after the Soviet Union broke up, 3,000 miles of Russia’s sphere of influence is filled with potential flashpoints. Russia’s war in Ukraine, and its demonstrated weakness there, only makes these local disputes more likely to explode.

The West might be inclined to celebrate Russia’s faltering influence across the Caucasus and Eurasia. With Russia’s appeal as a benefactor and security guarantor in question, fledgling democracy movements could find oxygen to thrive, and the West could discover openings for increased partnership and influence.

But that path is not inevitable. If Russia’s struggles in Ukraine herald its broader decline, it’s unlikely an easy peace is ahead for many in Russia’s neighborhood.

Elizabeth Shackelford is a senior fellow on U.S. foreign policy with the Chicago Council on Global Affairs. She was previously a U.S. diplomat and is the author of “The Dissent Channel: American Diplomacy in a Dishonest Age.”