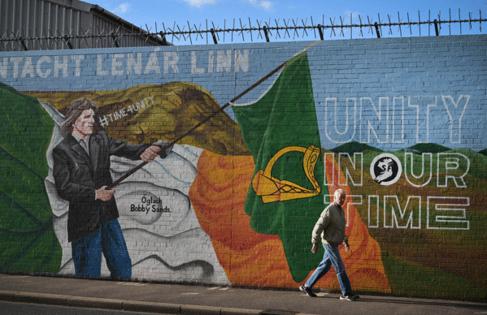 I traveled to Northern Ireland this summer to understand American divisiveness by looking through the eyes of another divided country. Here’s what I learned: The United States is a divided country that hasn’t accepted that we are a divided country, and that’s holding us back.

Most of us are caught in a fight-or-flight mentality when it comes to the divisions in our country right now. When we encounter someone who is on the “other side” of the political spectrum, the tendency is either to disengage from that person or to convince them why they are wrong. It can feel like those on the other side are so repugnant that they challenge our notion of what it means to be human and American.

But here’s the thing: America doesn’t have a premium on being divided. Lots of countries have grappled with divides, including Germany, North and South Korea, South Africa and Northern Ireland. Despite our longing for American exceptionalism, we are not dissimilar from these other countries. We need to face the fact that the United States is a divided country. It’s painful and it’s difficult. And it’s not changing anytime soon.

Northern Ireland’s ability to “name the problem” by admitting it is a divided country has enabled it to move toward greater peace. This realization came at a high price – the deaths of 3,000 Northern Irish people, injuries of many more, and a history of hurt and grief that will forever be part of the consciousness of the country. But after years of pain, fear and loss, people realized that the consequences of divisiveness are much, much worse than learning to accept that the country is divided and live with that reality peacefully.

Here's the risk to Americans if we don’t come to that same conclusion. During the Troubles, many Catholics and Protestants ceased to see each other as human. We’re at that precipice now in the United States. It feels like there is no common ground between liberals and conservatives, and that people on different sides of issues cannot possibly coexist. The risk is grave and urgent, because once we lose this humanity, at best it spurs greater isolation and disconnection from anyone different from us, and at worst it lays the ground for violence and civil war.

After naming the problem, Northern Ireland was able to create programs and policies to address its divide. The national police force changed policy to require equal amounts of Catholics and Protestants in office so as to decrease bias and promote collaboration across differences. At Corrymeela, a nonprofit peace center that builds bridges between Protestants and Catholics, Protestant and Catholic youth come to a retreat center to meet peers different from themselves and learn about the things they have in common. For many children, this is the first time they have met someone from the other side. If we were able to name the problem in the United States, we could create policies and programs that allow people to recognize their shared humanity.

For instance, although we champion the value of conversations across differences, and these conversations indeed make huge differences in society, many of us have no desire to participate in such exchanges. If we asked a white, rural, male Trump supporter and an urban, Black, liberal female to get together and listen to each other, many people would likely decline this invitation. But these two people inevitably have things in common just by being human. However, in most contexts these people likely will not encounter each other at all, and so they won’t ever have an opportunity to discover how they both share the experience of being human – of wanting to be loved and feel safe, to feel connected and valued, to feel successful and secure.

American democracy at the national level needs major reforms. However, for most of the American public, reforming national democracy is a daunting and unreachable task. But one thing we can do is build relationships at the local level. The notion of building relationships across differences can feel quixotic – tilting at windmills and an impossible dream. But part of the beauty of being human is that we have the capacity for empathy and kindness, and these feelings can grow even in the most painful circumstances.

As evidence, at Corrymeela in Northern Ireland, I saw the magnificence of what it looks like to let go of divides. I met Eleanor Hayes, a Protestant nurse who worked in the emergency room at the height of the Troubles. Sometimes there were so many people injured in an act of political violence such as a bombing that the hospital would have to put the perpetrators of incidents in beds next to the victims they had injured. Seeing humans wounded on both sides of the conflict led Eleanor to realize that people share more than they differ, and drew her toward a path of peace. The people I met in Northern Ireland were not apolitical or dispassionate. They still had their own belief systems and values. But they realized the price of divisiveness is not only too high, but also an unwinnable game. In the words of the 1980s film “War Games,” the only way to win the game was not to play.

If we want to address divides in our local communities, building relationships across differences is the place to start. We need to be able to put a face to the other side. I live in a politically purple neighborhood. I’m on one side of the political spectrum, and the people who live across the street from me are on the other. At the beginning of spring this year, I was trying to single-handedly lug a grill up the stairs to my deck. When my “other side” neighbor saw me struggling, she crossed over to give me a hand. As we lifted the grill together, I asked her how her dog was. The appearance of my neighbor with her old black lab was a staple in my daily life, and I hadn’t seen them walking lately. She shared that the dog had passed away. I felt sadness for her in that moment as well as gratitude for her help in lifting the grill.

When I watch the news and feel anger rising in my throat for the politics of the other side, I think of my neighbor’s face. It doesn’t change how I feel about my beliefs. But it does help me to realize that behind the politics, there are people.

Quixada Moore-Vissing leads Public Engagement Partners and is a fellow at the Carsey School of Public Policy at the University of New Hampshire.