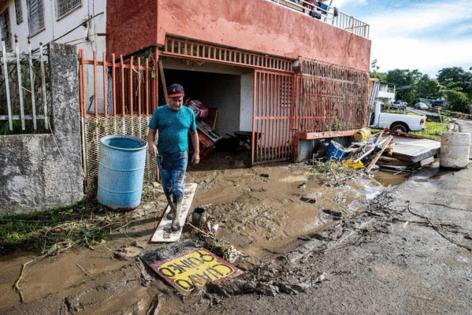 As Puerto Rico works very slowly to restore power to the roughly 80% of the island that remains in the dark after getting smacked from Hurricane Fiona, it’s worth remembering that the “act of God” language often found in insurance and legal documents doesn’t tell the whole story. Yes, humankind is generally powerless to stop a storm from actually forming, but the extent of damage it does is a direct result of policy decisions and preparation.

By that token, both the Puerto Rican and federal governments have failed the people of the island. Both before and after the ravages of Hurricane Maria five years ago, bad decisions have hamstrung the development of the more resilient energy grid that should’ve been non-negotiable in the 2017 storm’s wake.

From the management of public utility PREPA failing to maintain transmission lines crisscrossing the island to the awarding of a crucial post-disaster contract to a tiny, unproven Montana company, the stage was set for Puerto Ricans to suffer. Fiona must stand as the final warning that the current ways that the power is generated and delivered are not built to withstand the reality of contemporary superstorms, which means in part that leadership must get serious about accelerating the transition toward renewable energies.

This isn’t just because renewables are a better response to climate change, but because the main risks to Puerto Rican power are fuel — with the vast majority being natural gas and petroleum imported through ports, at the mercy of market shocks and supply chains — and transmission of power from plants to homes that might be miles away through rough terrain. Having a more varied system that’s less reliant on imports, say a mix of solar and wind projects, would go a long way to addressing the infrastructural problems that keep putting the island in the dark.

For that to work, Washington and San Juan must accelerate disbursement of the billions the federal government had set aside for recovery projects, of which more than $22 billion remains unspent.

Beneath the still-gleaming white dome, the Capitol’s new generation of promising leaders are jockeying for position, staking their turf, marking their hydrants, and swapping last-minute promises for next year’s power. ...Read More

Many companies promising “net-zero” emissions to protect the climate are backing that claim by investing in vast swaths of forests to recapture carbon. It turns out this strategy isn’t working very well.

Protest movements routinely bring symbols that help define their cause. Umbrellas serving as shields against pepper spray came to symbolize demonstrations in Hong Kong in 2014 and again in 2019 as citizens protested anti-...Read More

The dismantling of CNN as the Democrats’ leading network could be on the way with layoffs and cutbacks putting the once-dominant media outlet in decline.

CNN began notifying staffers on Wednesday that there would be ...Read More

Listening to Monday’s U.S. Supreme Court arguments about two prosecutions won by former Manhattan U.S. Attorney Preet Bharara, it seems likely that the bad guys will go free. If and when that happens, consider it a lucky...Read More

In the beginning, God created the heavens, the earth and American higher education. We lived in a bucolic state of nature until an evil serpent, U.S. News & World Report, tempted us to partake of the Tree of Knowledge: ...Read More