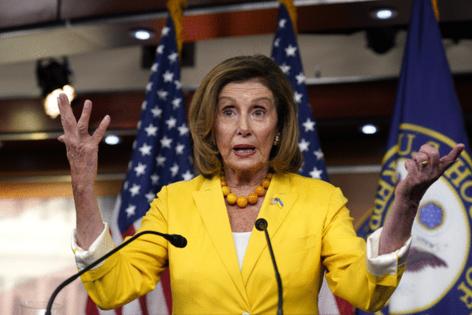 When Democrats pulled ahead of Republicans recently in broad averages on the generic ballot, I didn’t believe it. We’ve seen many large polling errors in Democrats’ favor in recent years, a 50-50 House vote would defy the historical trend toward the incumbent president’s party facing backlash in the midterms, and Joe Biden’s low approval ratings seem inconsistent with Democrats doing well.

But a couple of events on Aug. 9 have made me a believer.

First was a special election for a House seat in Minnesota. Democrats didn’t win. But, in losing, their candidate ran about 3 percentage points ahead of Joe Biden’s 2020 margin in the district and about even with Democrats’ 2020 candidate for the seat. Those numbers are similar to the results we saw in the June 28 special election for Nebraska’s first congressional district. Again, the Republican won. But he won with numbers that were somewhat weaker than Trump’s in 2020 and about flat with House Republicans’ performance.

Those are two random races, but they provide a real-world field test of the national political climate. The generic ballot says Democrats are very slightly ahead, which is exactly where they were in 2020. That’s hard to believe. But the special election results in Nebraska and Minnesota were in line with the local results from 2020. In other words, they’re exactly what you’d expect if that generic ballot polling is correct.

The other data point is from the primaries held in Washington state the same day as the Minnesota special election. Washington uses a “top two” electoral system. Instead of Democrats and Republicans running in separate primaries, everyone participates in a two-phase process. The first phase, the voting that happened on Aug. 9, has candidates from both parties all mixed together. Whichever candidates finish first and second — usually but not always one Democrat and one Republican — run against each other in November. This system lets us aggregate all the votes received by the various Democrats and all the votes received by the various Republicans and get a preview of the November election.

The results in the state’s House races were similar to what they were in 2016 and 2020 — much better for Democrats than in 2010 or 2014 — consistent with a very close national race for control of the U.S. House of Representatives.

Again, I wouldn’t bet a ton of money based on only one set of primaries and two special elections. But what’s impressive is that these results are consistent with one another and, most important, with the polling. They suggest that the national political climate for Democrats has improved a lot since voters in Virginia and New Jersey went to the polls last November.

What accounts for the turnaround? Probably a mix of three factors.

One is that gasoline prices started to fall, ultimately delivering 0% total inflation in July. Year-on-year price increases remain at a generational high, but the short-term trend has been good lately.

The other is that Republicans have no convincing argument against Democrats’ Inflation Reduction Act. It delivers exactly what Republicans say they want — an innovation-focused package of measures designed to increase U.S. energy production — but they won’t support it because the GOP is still wedded to low taxes on the wealthy more profoundly than to any other principle.

Last but by no means least, the overturning of Roe v. Wade leaves Republicans playing with political dynamite. Midterm losses for the president’s party are normally driven by a sense of backlash to policy overreach. But this summer it’s the Republican Party, via its control of the Supreme Court, that’s been delivering a visceral and alarming policy change. Chief Justice John Roberts, one of the most effective politicians in America today, tried to persuade his conservative colleagues to roll back abortion rights without generating alarming headlines. But they didn’t listen, and incaution has a price.

How can Democrats keep up the momentum? Unfortunately, there’s little they can do to ensure that inflation keeps weakening. But whatever they can think of is worth trying, especially when it comes to crucial energy commodities. Part of the upside from passing a major climate bill should be freedom to work hand-in-glove with fossil fuel companies to address immediate issues such as refinery capacity — rather than worry about placating environmentalists.

Beyond this, it is important to continue highlighting Republican extremism on the abortion issue. That ought to include moving a series of mild federal bills to establish a national floor under abortion rights. Will Republicans agree at least to guarantee access in cases of rape? To safe harbor for doctors who believe in good faith that an abortion is vital to a pregnant woman’s health? To the FDA’s sole authority over prescription drugs? To Americans’ freedom to cross state lines to seek medical care? It would be nice if one of two of these could pass, though I fear none could secure 60 votes in the Senate — which is too bad but also informative for voters.

Last but not least, Democrats need to avoid new stumbles. It’s not entirely a coincidence that their political fortunes have revived at a time when blue states have finally abandoned most nonpharmaceutical interventions and accepted endemic COVID as a fact of life. What’s not clear is whether this spirit of normalcy will govern the school year that starts in a couple of weeks. Obviously if children are ill, they ought to stay home just as ill children always have. But the rituals of testing and quarantine ought to end so students can benefit from a mostly normal school year. A hard line on this will, of course, agitate some parents and teachers. But Democrats should avoid reviving arguments around schooling that did them no favors last year.

The economy matters most of all. But the return to view of some traditional issues — abortion rights and taxing the wealthy — have helped Democrats regain their mojo. They should do their best to stick with that rather than open new fights or reopen old ones.

Matthew Yglesias is a columnist for Bloomberg Opinion. A co-founder of and former columnist for Vox, he writes the Slow Boring blog and newsletter. He is author, most recently, of “One Billion Americans.”