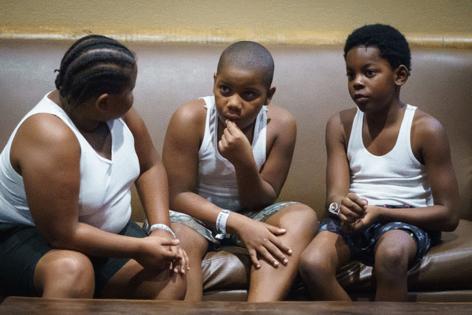 But they will also carry with them something else: the grim and invisible burden of having witnessed Blair’s partner and the father of her two younger boys fight for his life after being shot right outside their South Philadelphia home last August.

Rasheem Ferron, 29, was later pronounced dead at a hospital. Blair’s best friend, who was also shot, survived. The episode was chillingly familiar for the young family — in 2018, Hafiz Hendricks, the father of Blair’s oldest boy, was shot and killed in Mount Airy.

Numbers never tell the full story, but they do offer a sobering snapshot of how many children in this city are weighed down by the lingering emotional effects of bearing witness to — and experiencing — trauma.

Since 2018, there have been nearly 9,000 shooting victims in the city. Take each victim, whether they survive or not, and multiply the pain that they’ve experienced among countless relatives and friends.

Dig into the numbers a little more and consider this: Since 2018, more than 700 of the city’s shooting victims have been under 18, including 136 young people this year as of Aug. 10.

For its part, the School District has a series of trauma-informed practices and programs in place around the city, including special counseling sessions, behavioral health services, and grief groups.

“I think the number-one thing is about relationship and connection,” said Jayme Banks, the district’s deputy chief for prevention, intervention, and trauma. “So that students feel as if they have relationships with individuals so that they will share what they have experienced, and so that we can help support and connect them to resources.”

The district is clearly trying, but even while listening to Banks, all I kept thinking was: How in the world could a perpetually challenged school system possibly address a public health issue that begins long before a child enters a classroom and persists long after the final bell?

Think of some of the recent headlines we’ve seen that offer only the barest glimpse of the waves of mourning and anguish that are cascading across our city.

Two weeks ago: “13-year-old girl shot Friday was at the traffic cone beating of a 73-year-old man.”

There are still a lot of questions surrounding the fatal beating (officials said the teen did not strike the man and she was not charged) and it remains unclear if the shooting was related to the earlier incident.

But all I could think of is the trauma this one young girl is carrying around: a witness to violence one month, a victim of violence the next. Imagine how that will manifest if she doesn’t get the help she needs.

Speaking from her South Philadelphia apartment, Jessica Blair is also worried about her three boys. Last weekend, she and the children attended a retreat in the Poconos for children impacted by gun violence.

The second annual gathering, organized by Moms Bonded by Grief, was a welcome reprieve for Blair, who has only recently been approved for an emergency transfer from the Philadelphia Housing Authority apartment where her younger boys’ father was shot.

Police hosed off the blood from the front of the home. But it was left to Blair to scrub his blood from the floors. The boys weren’t home for that; they were with relatives. When the children got home, they pointed out some spots she had missed.

But then, like grief, some stains can never be fully washed away.

During the last school year, teachers complimented Blair on the exceptional classroom behavior of her oldest son, but she worries his silence is masking his pain.

Her youngest son started acting out in day care — something he never did when his father was alive. He starts first grade this year at a public school in South Philadelphia, and Blair is hopeful that the School District’s programs will help him.

I hope so, too. And my belief is bolstered by the dedication of so many of the city’s overworked and overwhelmed public school teachers who are already being asked to perform miracles inside their classrooms.

For 10 years, Maureen Boland, a high school English teacher, has asked her incoming ninth graders to answer the same question at the start of the school year:

“What should a teacher know about you?”

Increasingly, the responses in their essays have included traumatic events that had already made an indelible mark on their young lives.

One year, a third of her students wrote about being impacted by gun violence. That reality is why Boland — and her students — have become vocal antiviolence advocates.

“I decided to teach where I was needed most,” said Boland, who works at Parkway Center City Middle College — a public high school in Callowhill where students take college-level courses along with their high school classes. ”Having a social justice mission behind your teaching in Philadelphia is very productive, because it helps you stay committed and persistent and serving the kids in your classroom who need you the most.”

In 2018, Boland’s students led the way to a demonstration at the Art Museum steps to call attention to gun violence. Last year, they organized a community-building flag-football tournament with police officers from the 17th District that they hope to take citywide.

In the years since I’ve gotten to know Boland, she’s been a consistently passionate and thoughtful voice for her students.

But when we spoke recently, her words reflected the frustration of a city at a crossroads.

“It’s a disgrace,” she said, noting that children’s sense of safety in Philadelphia is often determined by the zip code that they live in.

“The unfairness of it, the unfairness of how unprotected kids are,” Boland said. “It’s just ridiculously unfair that some kids have their whole childhood marked by fear and other kids don’t.”

It’s becoming increasingly clear that Florida Gov. Ron DeSantis will have to answer for the dubious legality of his cruel stunt that dropped two state-funded planeloads of migrants on the Massachusetts resort community ...Read More

Conservatives everywhere are very upset by the idea of people dressing up and entertaining kids.

No, they aren’t talking about clowns, or mall Santas, or mascots, or characters at theme parks. They’re talking about ...Read More

Treating human beings like unwanted kittens left on the doorstep of an unwitting neighbor's home is unconscionable, but the political stunts being played by the governors of Arizona, Florida, and Texas are more ...Read More

Call it the (spineless) Republicans' lament: "The things we do for the orange Jesus."

Those were the words muttered by one House Republican on Jan. 6, 2021, according to Rep. Liz Cheney, as he joined other Trump toadies ...Read More

At this point in the Los Angeles County Sheriff's Department decent into ignominy, it's clear to even the casual observer that Sheriff Alex Villanueva isn't just willing to play in the mud, he seems to enjoy it like a hog ...Read More

Russian President Vladimir Putin has raised anew the possibility he might use nuclear weapons against Ukraine to prevail in a conflict going sideways. The smart money says he won’t, because doing so — or otherwise ...Read More