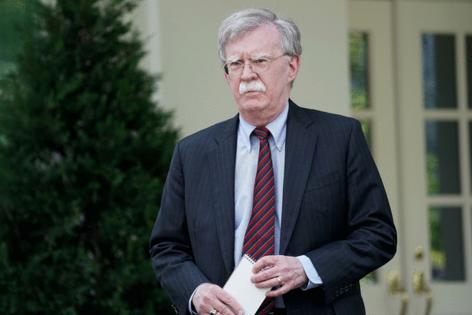 The Iranian regime has a long, dishonorable history of assassination plots against dissidents and detractors abroad, but commissioning a hit against a former U.S. national security adviser represents a raising of the bar in brazenness. The revelation that a member of the Islamic Revolutionary Guard Corps attempted to have John Bolton murdered — on American soil, at that — should serve as a sobering reminder for President Joe Biden of Tehran’s depravity as he contemplates making a deal that will both enrich and embolden those behind the plot.

The U.S. Justice Department said Shahram Poursafi, an IRGC member based in Tehran, offered $300,000 “to individuals in the United States [to] carry out the murder in Washington, DC or Maryland.” The hit was likely meant as retaliation for the 2020 U.S. drone strike that killed Qassem Soleimani, a top IRGC commander designated by the U.S. as a terrorist and also personally sanctioned by the European Union and the United Nations.

Poursafi began casting for an assassin last fall, even as Biden was reiterating his pledge to revive the nuclear deal, known as the Joint Comprehensive Plan of Action, that Iran signed with the world powers in the summer of 2015. President Donald Trump pulled the U.S. out of the JCPOA in 2018, arguing it didn’t do enough to prevent Tehran from acquiring nuclear weapons, and slapped economic sanctions against Iran.

Biden has made a return to the deal one of his foreign policy priorities. After several rounds of negotiations in Vienna, the U.S. and Iran are now examining what is being billed by European mediators as the “final text” of an agreement to revive the nuclear deal. If they agree, the sanctions will be lifted, giving Tehran access to hundreds of billions of dollars in frozen assets and revenue from oil exports.

Like President Barack Obama, who championed the original agreement, Biden seems to believe that if Iran’s leaders are allowed to make money, they will tone down the aggression against their Arab neighbors as well as the U.S.: more trade, less terrorism.

The opposite is more likely. In the years that the JCPOA was in effect, Iran increased its financial and material support for a network of militias and terrorist groups it uses to menace the Middle East and international trade. Biden’s repeated assurances of his sincerity to revive the deal — and his administration’s lax application of Trump’s sanctions — have been met only with bad faith from Iran.

While pocketing billions from oil exports carried out in contravention of the sanctions, the regime has grown more aggressive in its behavior. It has accelerated its uranium enrichment well past the point of any nonmilitary application. Tehran has also ratcheted up its program of hostage-taking, specifically targeting people with Western passports.

And, as the plot against Bolton demonstrates, Iran has grown more ambitious in its international assassination campaign. Much of it is directed at Israeli tourists and diplomats, apparently in retaliation for Israel’s killing of top IRGC figures connected to the nuclear program. In June, Turkey detained eight men in an Iranian operation to kill Israeli tourists in Istanbul.

Two months earlier, Israeli intelligence foiled an IRGC plot to assassinate an Israeli diplomat in Turkey, an American general in Germany and a French journalist.

Iran has also grown more brazen in planning attacks in the U.S. In late July, a man carrying a loaded AK-47 was arrested outside the Brooklyn home of Masih Alinejad, a prominent critic of the regime. It was almost exactly a year after four Iranian agents were charged in federal court in Manhattan with conspiring to kidnap Alinejad.

By targeting Bolton, the regime is signaling that its recklessness knows no bounds. And the former national security adviser may not even have been the IRGC’s top target: According to the Justice Department, Poursafi let it be known he would pay $1 million for another hit, presumably against someone of even higher profile. The State Department recently told Congress that it is paying to protect former Secretary of State Mike Pompeo and his point man on Iran, Brian Hook, both of whom face “serious and credible” threats from Tehran.

It is especially ironic that one of the Iranian demands that has stalled negotiations for the resuscitation of the nuclear deal was that Biden remove the IRGC from the State Department’s list of designated terrorist groups. The president has, wisely, refused to make that concession.

But Biden should now ask himself whether a regime this reckless can be trusted with any deal at all.

As the Parkland shooter’s sentencing trial uncovers chilling details about his ...Read More

I am a proud undocumented medical student attending the UCLA School of Medicine — a reality that still seems like a dream. It is a reality because of the 2012 Deferred Action for Childhood Arrivals policy, or DACA. ...Read More

ST. LOUIS — When Barbara Sheinbein, 64, went to vote in the April election her friend drove her to the polls. Her friend went inside the polling location in St. Louis County and told a worker that Sheinbein wanted to use...Read More

On Sept. 18, nearly five years to the day of Hurricane Maria, the force of Hurricane Fiona and a fragile power grid plunged Puerto Rico into a frightening yet familiar darkness. From low-lying to mountainous regions, ...Read More

House Minority Leader Kevin McCarthy last month unveiled the Commitment to America, a summary of the agenda for what he hopes will be a new Republican majority in 2023. The policy goals it outlines are a mix of traditional...Read More