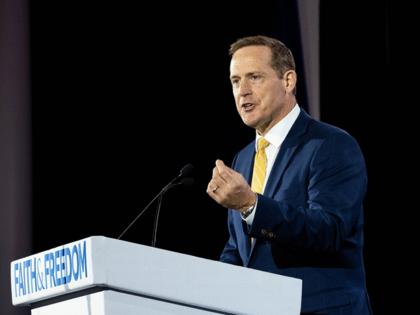 So it’s particularly concerning to see someone who tried to overturn a legitimate presidential election fundraising for a man who wants to be North Carolina’s next senator.

Conservative attorney and activist Cleta Mitchell will host a fundraiser on Aug. 15 for Rep. Ted Budd, staunch Donald Trump ally and Republican candidate for U.S. Senate. Trump’s daughter-in-law, Lara Trump, is scheduled to appear at the fundraiser as a special guest.

Mitchell is one of several lawyers who aided Trump in his scheme to overturn the 2020 election. She is perhaps best known for joining Trump on a January 2021 phone call with Georgia Secretary of State Brad Raffensperger, in which Trump demanded Raffensperger “find 11,780 votes” to sway the outcome of the election in his favor.

Mitchell also peddled false conspiracies about election fraud and “irregularities,” including absurd claims of voting by dead people and non-citizens, in the days following the election. She spoke directly with Trump on Jan. 6 and has been subpoenaed in an ongoing criminal investigation into election interference in Georgia.

But rather than disavow the support of someone so deeply ensnared in Trump’s lies and potentially criminal activity, Budd’s campaign is embracing this fundraiser as an opportunity.

“We’re great with it,” Jonathan Felts, senior adviser to Budd, told the News & Observer last week. “Like many people leaving D.C. and other high-tax areas, she decided North Carolina is a great place for her retirement, and we’re thrilled about this event. It’s going to be a great event.”

Budd’s fundraising totals have consistently trailed those of his Democratic opponent, Cheri Beasley, who raised approximately 3.5 times as much as him last quarter. The cost of attending the fundraiser ranges from $250 to $5,800.

Mitchell, who boasts close ties to Mark Meadows and Ginni Thomas, is still spouting “election integrity” nonsense. She’s complained about a “new American majority” of people of color, young people and unmarried women that could make conservatives “obsolete,” according to recordings obtained by Politico. Mitchell currently leads an operation called the Election Integrity Network, where she is training “a volunteer army of citizens” to aggressively monitor elections.

Of course, Budd’s genial relationship with the former president has never been much of a secret. He’s proud of Trump’s endorsement and still seems reluctant to acknowledge that the 2020 election was not, in fact, stolen. (He once admitted that Joe Biden was the rightful winner, but later walked that claim back in a different interview, citing “serious constitutional concerns.”) Since winning the GOP primary in May, Budd has strategically avoided talk of Trump and Jan. 6, perhaps realizing it may not appeal to moderate and unaffiliated voters whose support will be crucial in a statewide general election.

North Carolinians shouldn’t be fooled by his silence. Budd is still courting election deniers in private for political gain. Much like Budd’s affection for Trump, his open embrace of someone who concocts lies and dangerous plots is deeply troubling. It is, at the very least, an implicit acceptance of that behavior and a legitimizing of those who engaged in it.

The choice to overlook threats to our democracy is a threat in and of itself, and it extends far beyond North Carolina. Budd is just one of many Republicans who are treating criminal attempts to overturn the election — as well as an attempted coup — as something far less dire than it actually was. What Trump did, what Mitchell supported and what happened on Jan. 6 should never be normalized.

The past two years have shown that faithfulness to Trump and faithfulness to our country are often mutually exclusive. Voters should think carefully about which one Budd is more likely to choose.