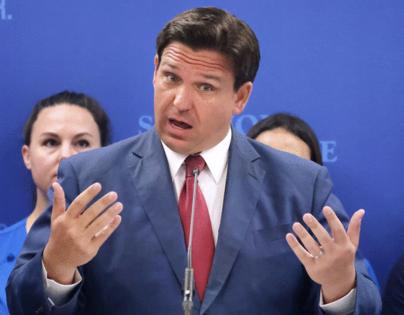 Gov. Ron DeSantis’ abrupt sacking of Hillsborough County State Attorney Andrew Warren was the deed of a tyrant drunk with power, inflamed with presidential ambition and accustomed to ruthlessness as the first resort rather than the last in having his way.

Charlie Crist, the congressman and former governor who’s competing for the Democratic nomination to oppose him in November, understated the crisis when he accused DeSantis Thursday of being a “wannabe dictator.” The governor crossed the line from potential to actuality long ago.

His bill to punish Disney — and possibly the two Democratic counties that might have to assume its debts — was unvarnished dictatorship. He controls the Legislature as totally as Fidel Castro ruled the Cuban Communist Party. It gives him whatever he wants, no matter how wrong it is.

There’s more to it than the unconstitutional 15-week abortion law or the not-yet-enacted ban on gender dysphoria treatment for minors that Warren said he wouldn’t prosecute. The cops in Hillsborough County have been after Warren for declining to prosecute petty charges — such as mouthing off to them — that would not likely deserve or result in jail time. Tampa city police, the right-wing sheriffs of neighboring Pasco and Polk counties and Attorney General Ashley Moody eagerly participated in the Warren-bashing event at which DeSantis announced he would suspend the state attorney from office.

The Republican governor’s announcement — with no warning to the twice-elected Democratic state attorney — took place at the offices of Hillsborough County Sheriff Chad Chronister. That fact speaks volumes about the conspiracy and prearrangement that went into it.

Warren was imprudent, no doubt, in announcing beforehand that he wouldn’t prosecute doctors under the new abortion law or for performing gender-affirming care. (The latter isn’t even illegal in Florida, although the DeSantis administration is proposing to deal with it by executive fiat.) You don’t wisely bait a rabid bear like Florida’s governor.

But prosecutors are no less entitled to the First Amendment than any citizen is. Warren had not actually done anything to merit suspension, even arguably.

Moreover, it was monumental hypocrisy for DeSantis to carry on about this being a government of laws, not men. His own education commissioner has told Florida school boards to ignore the Biden administration’s new rules on extending protection from sex discrimination to LGBTQ individuals. In DeSantis-land, it would seem, the only laws meriting enforcement are his.

In suspending Warren, DeSantis took the most radical means rather than the least to ensure prosecution of disputed cases. When Aramis Ayala, the former state attorney in the Orange-Osceola circuit, announced that she wouldn’t ask for the death penalty in any murder cases, then-Gov. Rick Scott reassigned all the pending ones to another state attorney. He didn’t suspend Ayala and throw her out of her office.

The people of Hillsborough County elected Warren twice, in 2016 and 2020, knowing that he would bring a liberal, humanistic approach to the chief prosecutor’s job.

There are other prosecutors who are declining or say they will decline to prosecute simple marijuana possession cases. Broward’s state attorney, Harold Pryor, made that announcement last year, saying they would be handled in a “non-criminal way.” Possession associated with other, more serious charges would be prosecuted on a case-by-case basis, he said.

As Warren told the media, DeSantis’ despotism “sends a message not just to all state attorneys, but to all other officers and all the people of Florida.” It ought, he said, “to terrorize everyone.”

In making abortion such a pretext for removing Warren, DeSantis obviously ignores the message that deeply conservative Kansas sent to the nation Tuesday. By 59 to 41%, that red state’s voters rejected a constitutional amendment aimed at abolishing abortion rights. But for now, obviously, DeSantis’ concern is only about capturing the Republican nomination for president in 2024. That means being more authoritarian than Donald Trump and more anti-abortion than Greg Abbott.

As he has done since becoming governor only by the skin of his teeth four years ago, DeSantis governs as far to the right as he can get.

Unsurprisingly, the acting state attorney he put in Warren’s place is a county judge, another Federalist Society member whom he had appointed to a judgeship.

The prospects for getting DeSantis’ captive state Senate to reinstate Warren aren’t good.

However, the governor’s defeat in November would replace him with a Democratic governor who could withdraw the suspension, reinstate Warren, and send the Federalist judge packing.

It’s another of the many reasons to elect a new governor.