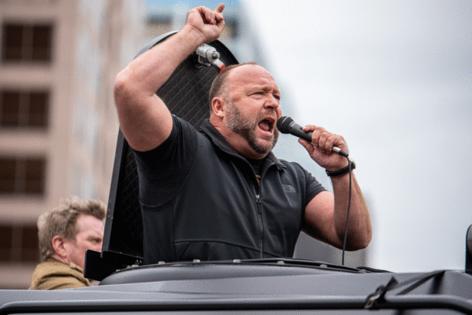 A Texas jury has ordered the conspiracy theorist to pay $49.3 million in total damages to the parents of a first grader killed in the 2012 Sandy Hook Elementary School massacre. About time!

Jones finally admitted, when he was faced with bankruptcy, that the 2012 attack in Newtown, Connecticut, was “100% real.”

The Herald was there within hours. Our reporters called back, one who was sick to her stomach, with constant updates. It remains a cruelty that’s unimaginable. At least it is to us.

Alex Jones and his ilk make money — reportedly $800,000 a day at one point for Jones — by preying on people who don’t have a firm grip on reality. It’s almost a disservice to even give these bottom-feeders any ink. But some truths need to be put on the presses.

No one should be allowed to tarnish the memory of loved ones lost to such a tragedy. Many will argue this should apply to other topics, but there’s nuance in the news. The mass murder of children does not fall into any category other than a crime against humanity.

We don’t buy what Alex Jones is selling and nobody else should either. No amount of apology should free him from his shameful prison.

“I admitted I was wrong. I admitted it was a mistake. I admitted that I followed disinformation but not on purpose. I apologized to the families. And the jury understood that. What I did to those families was wrong. But I didn’t do it on purpose,” Jomes said after the verdict.

Too little, too late.

Real journalists dig for the facts, seek out official comments, ask experts for feedback and chase down witnesses in a daily calculus that takes dedication. Our columnists offer up their unique opinions — on all sides of the political spectrum — and we present them to you to judge us by our words.

We remain skeptical yet informative. If you want us to chase that man didn’t land on the moon and other such nonsense, call someone else.

We can take the heat on just about anything, but the morning the news broke that children in an elementary school in Newtown, Connecticut, were being killed we sent our staff reporters, photographers and a columnist running.

This country needs to figure out how to protect our children. Alex Jones and his hurtful ramblings did the opposite. He can keep his ratings. The rest of us will keep reporting and we will never forget Sandy Hook.

“Last night, the echo of ambulances and police cars was replaced by the glare of TV floodlights that overshadowed Christmas lights on the homes up and down Church Hill Road, which leads up to Sandy Hook Elementary School, the site of yesterday’s unspeakable carnage,” retired Herald columnist Peter Gelzinis wrote that December day.

A Newtown rabbi a year later grasped what everyone was trying to comprehend as a report on the shooting was released and residents faced more difficult days.

“The most important thing really is not how we die, because we’re all going to die. It’s how we live.”

Peter tracked that quote down in hopes it could ease some of the pain. That’s what Alex Jones will never understand.

As the Parkland shooter’s sentencing trial uncovers chilling details about his ...Read More

I am a proud undocumented medical student attending the UCLA School of Medicine — a reality that still seems like a dream. It is a reality because of the 2012 Deferred Action for Childhood Arrivals policy, or DACA. ...Read More

ST. LOUIS — When Barbara Sheinbein, 64, went to vote in the April election her friend drove her to the polls. Her friend went inside the polling location in St. Louis County and told a worker that Sheinbein wanted to use...Read More

On Sept. 18, nearly five years to the day of Hurricane Maria, the force of Hurricane Fiona and a fragile power grid plunged Puerto Rico into a frightening yet familiar darkness. From low-lying to mountainous regions, ...Read More

House Minority Leader Kevin McCarthy last month unveiled the Commitment to America, a summary of the agenda for what he hopes will be a new Republican majority in 2023. The policy goals it outlines are a mix of traditional...Read More