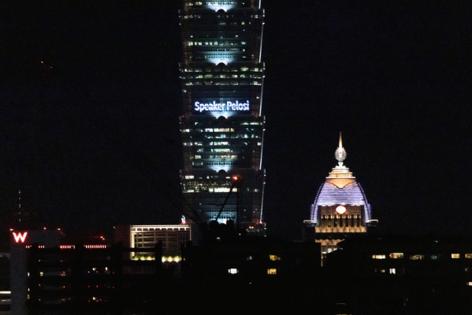 U.S. House Speaker Nancy Pelosi has left Taiwan. Though the California Democrat didn’t stay long, less than 24 hours, the fallout from her visit plunges the Biden administration into a tricky — and arguably unnecessary — period of brinkmanship with China.

In her meeting with Taiwan’s president, Tsai Ing-wen, Pelosi didn’t say anything America hasn’t said before about Taiwan, China and democracy. “Today the world faces a choice between democracy and autocracy,” the speaker said. “America’s determination to preserve democracy here in Taiwan and around the world remains ironclad.”

Equally unsurprising was Pelosi’s desire to make the trip. In her 35 years in Congress, she has built a reputation as one of Washington’s staunchest critics of China’s disregard for human rights.

In 1989, she spearheaded a House resolution condemning Beijing’s massacre of student demonstrators around Tiananmen Square. Two years later, she went to Beijing and infuriated Chinese Communist Party leaders by displaying a banner in Tiananmen Square with the words, “To Those Who Died for Democracy in China.” Over the years, she has spoken out strongly against China’s policies toward Tibet and Hong Kong.

All commendable stances. Nevertheless, timing in geopolitics matters, and this was far from the right time for a trip to Taipei. It stokes a new, precarious crisis for the Biden administration at a moment when the president is careening between other crises — from a flagging economy and doubts about his party’s outlook in the midterm elections to Vladimir Putin’s five-month war in Ukraine.

China has reacted predictably to Pelosi’s excursion, with fiery denunciations and pledges to assert itself militarily in the Taiwan Strait and around the island with live-ammunition exercises. Those drills are slated to begin Thursday, and they could prompt Taiwan to mobilize its forces. It puts both sides on the edge of direct conflict and forces the U.S. to consider what it would do to back up its longtime promise that it would defend Taiwan against military aggression from Beijing.

The U.S. has been here before. In 1995, China was incensed by President Bill Clinton’s decision to invite Taiwan’s president at the time, Lee Teng-hui, to visit the U.S. The crisis rolled into 1996, when China’s firing of missiles near Taiwan’s main island prompted Clinton to send U.S. aircraft carriers to the Taiwan Strait. Ultimately, China backed down.

Today, China is demonstrably stronger, militarily and economically. But domestically, it’s a sensitive time for Chinese President Xi Jinping. This fall, the party will have to decide whether Xi gets an unprecedented third term. While he needs to project unyielding strength and defiance in the wake of Pelosi’s visit, he can’t afford to launch China into a full-blown standoff that derails what’s left of global stability and his own country’s economy.

Xi’s best course to take is to not overreact. Pelosi’s visit doesn’t signal any kind of divergence from America’s long-standing “one China” policy, which holds that the U.S. recognizes the Beijing regime as China’s only legal government but merely acknowledges Beijing’s stance that Taiwan is part of China without endorsing it outright.

That policy doesn’t prevent Washington from selling arms to the Taiwanese government so that it can defend itself. It doesn’t stop the U.S. from having robust trade relations with Taiwan, home to the world’s most critical source of advanced microchips. And of course, it doesn’t prevent American political powerhouses such as Pelosi from visiting Taiwan.

Ramping down the temperature in the Taiwan Strait necessitates the Biden team conveying to Beijing that the “one China” policy remains the guiding principle behind Sino-U.S. relations. Also pivotal: Washington must allay concerns from America’s other Asian allies — Japan, South Korea and Australia, for example — that have been rattled by China’s belligerence in response to Pelosi’s visit. Those allies represent a vital economic and strategic counterpoint to Beijing in the region, and they need reassurance that Biden will keep this latest crisis from burgeoning into something far worse.

So much of what happens next rides on Xi’s actions. He could choose this moment as a springboard for achieving China’s long-standing goal of reunifying Taiwan with Beijing — but through military force. That would be a grave mistake, since it would force the U.S. to equip Taiwan with enough firepower to defend itself. De-escalation is the best and only choice for all entities involved, and Washington should make it a top priority to engineer that cool-down.

In the week since he reached a deal with Senate majority leader Chuck Schumer on the “Inflation Reduction Act,” Sen. Joe Manchin has been everywhere promoting it. One of the West Virginia Democrat’s top selling ...Read More

SACRAMENTO, Calif. — Bob Britton doesn't look like the kind of guy to be cursing out the American Civil Liberties Union, but there he was outside the state Capitol this week, offering up some choice four-letter words for...Read More

With so much attention fixed on soaring prices for gasoline and groceries, one can almost overlook the fact that we’re also enduring an affordable housing crisis. The question is, why?