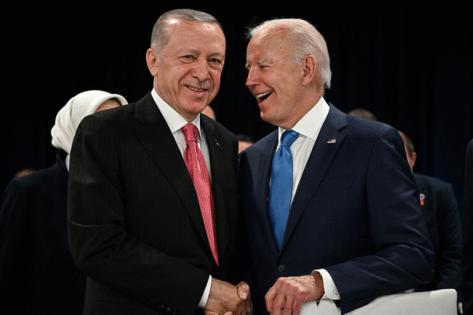 To judge by Turkey’s pro-government media, President Recep Tayyip Erdogan scored a major geopolitical victory for his country at the North Atlantic Treaty Organization summit in Madrid. “Turkey slammed its fist on the table, Europe came to its knees,” declared the conservative Yeni Akit daily.

This was a reference to Erdogan’s brinkmanship over the accession of Sweden and Finland, which forced the alliance’s other members to invest time and energy in entreating him just as NATO faces its sternest test in decades as a result of Russian expansionism. The Nordic nations eventually signed an agreement with Turkey, pledging to address its security concerns, which center mainly on Kurdish groups that Ankara considers terrorists.

This allowed the president to withdraw his objections to their membership. As a reward, Erdogan got a face-to-face meeting with President Joe Biden and the White House’s backing for the sale of F-16 fighter jets to Turkey. NATO also held a special session to discuss its southern flank, allowing the Turkish leader to raise the threat of Kurdish terrorist groups, his personal hobbyhorse.

In the weeks and months ahead, Erdogan will talk up his success in Spain as he ratchets up his re-election campaign. With less than a year to go before he faces an electorate in severe economic distress, the president will take any opportunity for chest-thumping he can get.

But Turks paying close attention to the 11th-hour machinations in Madrid will know Erdogan gained very little — and may have lost a lot. If he got a few talking points for his campaign speeches, the president gave up a chance to return Turkey to the high table of international affairs.

He could have played it differently. Instead of holding up Sweden and Finland, Erdogan might have used his status as NATO’s longest-serving leader to be the statesman at a time of strife. His views about the crisis growing along NATO’s eastern borders, with the war in Ukraine and anxiety in the Baltics, would have been especially valuable because he enjoys a closer relationship with Russian President Vladimir Putin than anybody else in the alliance.

Instead, his gamesmanship confirmed Erdogan’s reputation within NATO as a spoiler who pursues personal advantage above the collective good. When Sweden and Finland join the alliance, the list of members with bitter experience of his self-serving opportunism will grow by two. The others, already angered by his making common cause with Putin and compromising the security of the group as a whole by purchasing Russian missile-defense systems, won’t forget that when a major crisis confronted them all, Erdogan chose to play parochial politics.

And to what end? There is less to that agreement with the Nordic countries than meets the eye. Although Sweden and Finland agreed to address Turkey’s longstanding complaints that they give shelter to Kurdish terrorists and other groups dedicated to Erdogan’s downfall, they have more than enough room to obfuscate when it comes to taking action against those Ankara has identified as enemies.

Evidence of the wriggle room will soon be at hand. Turkey has asked Sweden and Finland to extradite 33 individuals. Some are reportedly members of the Kurdish Workers Party, known as PKK, which is designated a terrorist group by the US and the European Union as well as Turkey. Others are followers of Fethullah Gulen, a Pennsylvania-based Turkish cleric and former Erdogan ally whom Ankara blames for a 2016 coup attempt. (Gulen has rejected the accusation.)

But the agreement announced in Madrid doesn’t commit Sweden and Finland to hand over specific individuals, much less oblige them to change their extradition laws. The burden of proof they will require from Turkey is substantial, and the odds that any of the 33 will be put on a plane to Ankara anytime soon aren’t very good.

The other commitment in the trilateral agreement is somewhat more significant: The two Nordic countries will lift arms embargoes against Turkey. But the weapons Ankara covets most tend to be American, and Erdogan made no breakthroughs on that front.

Biden’s support for the sale of the F-16s was hardly a concession: It has been expected for many months. The main hurdle had been in Congress, where lawmakers were holding up the sale to punish Erdogan for his 2017 decision to purchase Russian-made S-400 missile-defense systems despite American warnings that they would compromise NATO security. And even there, objections had already softened before the kerfuffle over NATO expansion.

In any case, the F-16s are only a consolation prize. Turkey remains barred from acquiring more advanced F-35s — it was meant to participate in the manufacture of the jets, but was dropped from the program when it bought the S-400.

And that face-to-face meeting with Biden? The two men smiled dutifully for the cameras, and Erdogan can use those images to advertise his status as a world leader. But Biden won’t have changed his assessment that the Turkish leader is an autocrat and that the U.S. ought to “embolden” his opponents to defeat him next year. Erdogan may yet find that Biden wasn’t so much smiling as baring his teeth.

As for that NATO session on the southern flank, that was not so much a concession to Turkey as an indulgence to Spain, the summit’s host, which wanted a discussion on migration and militant groups in Africa.

Erdogan has long gotten away with foreign-policy adventurism at the expense of Turkey’s allies, and he extended that streak in Madrid. But the returns from his maneuvering have dwindled nearly to the point of nothing.