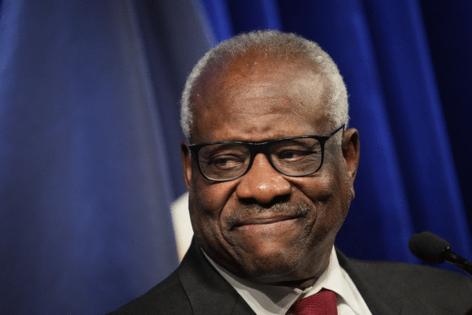 For decades, Justice Clarence Thomas sat mostly silent on the Supreme Court bench, content to let others debate the controversies of the day. Because Thomas would not argue in public, court watchers had no idea of how he processed arguments beyond his written dissents and concurrences.

Thomas did not spar like Justice Antonin Scalia, the intellectual anchor of the high court's right wing. He didn't mind if his extroverted, opera-loving colleague got a disproportionate share of the glory as long as the court continued in what he considered the right direction.

An avid comic book reader in his youth, Thomas perhaps fancied himself a judicial version of Marvel's Black Bolt, Lord of the Inhumans. A single syllable from Black Bolt's lips could shatter mountains; this forced him to communicate through sign language. He kept his words to himself.

On the rare occasion when Thomas did speak or quiz a startled lawyer arguing before the Supreme Court, it was so notable it became news in itself. Black Bolt of SCOTUS had spoken, catching everyone — including his colleagues on the bench — by surprise.

Then Scalia died, leaving what would soon be the high court's supermajority at the disposal of the goldilocks jurisprudence of Chief Justice John Roberts. Thomas decided to use the power of Black Bolt.

Because he had been mostly silent for so long — at one point, he hadn't said anything on the bench for a decade — it was easy to construe Thomas' reticence as a lack of ambition. He was a reliable conservative vote, but unlike Justice Samuel Alito or the three justices who would be appointed to the bench by President Donald Trump, Thomas was more in touch with the country's growing restlessness than even his most Machiavellian colleague.

You could see it in his eyes: He would not allow the high court to become a mere plaything of the Republican establishment under Roberts. The culture war stakes he deeply believed in were too high.

Long before Trump brought his clown car to Washington, Virginia "Ginni" Thomas, his wife of three decades, prattled on over breakfast about shadowy conspiracies undermining America while he listened politely, eating English waffles and hoping his fluttering eyelids wouldn't betray his boredom.

Because she texts like a Ritalin-addled teenager, Ginni Thomas has generated enough texts and nutty social media posts to keep insurrection investigators and critics of her husband busy for years. If it's not George Soros "stealing" elections, then its Jan. 6 "patriots" being persecuted by the Biden Department of Justice.

Because she was outspoken in her anti-abortion rights advocacy and in the way she lobbied the Trump administration to crackdown on Black Lives Matter, antifa and liberals in general, it would be absurd to believe she never lobbied her husband, the most conservative member of the Supreme Court, about issues near and dear to her heart.

But if you're Black Bolt, you don't care whether something looks like a conflict of interest. That's for lesser mortals and justices to worry about.

Justice Thomas did not recuse himself from weighing in on cases that could potentially effect the legal standing of his wife, a Jan. 6 sympathizer. That's how the Supreme Court's longest serving justice rolls these days. He's a law unto himself.

Last week, the Supreme Court handed down its much-dreaded ruling on the constitutionality of Roe v. Wade. Alito wrote the majority opinion in Dobbs v. Jackson Women's Health Organization that a woman's right to an abortion is no longer guaranteed by federal law because Roe — in the eyes of the conservative justices — was decided erroneously, despite having survived a half-century of challenges.

Roberts and Justice Brett Kavanaugh tried to assure freaked-out Americans in their concurring opinions that a right to privacy built upon Roe and Casey v. Planned Parenthood hadn't been completely shredded by Dobbs and that the court would not be coming for their birth control, their gay marriage or their LGBTQ rights.

But like Black Bolt, Thomas whispered a contrary notion in his concurring opinion that shattered once uncontested mountains of certainty: "For that reason, in future cases, we should reconsider all of the court's substantive due process precedents, including Griswold, Lawrence, and Obergefell."

Thomas continued: "We have a duty to 'correct the error' established in those precedents."

We all know that gay marriage, access to birth control and even the right to marry someone of a different race are not rights enumerated by the U.S. Constitution. Thomas is comfortable revisiting them to test their constitutionality.

The landed white male aristocracy of the 18th century did not give the rights of women or Blacks much thought. In fact, both women and the enslaved were considered property in those early iterations of the Constitution and Bill of Rights.

Acting as if the ultimate source of constitutional fairness in a pluralistic society should rely on the original intentions of an exclusionary document nearly 300 years old is absurd anyway.

It would also be foolhardy to believe assurances from Justices Alito, Roberts and Kavanaugh regarding privacy rights when the high court's most powerful jurist says otherwise.

Many of Thomas' critics think they're being clever when they point out that according to the "originalist" logic that the high court's majority subscribe to, even the conservative justice's right to be married to Ginni Thomas, a white woman, has to be interrogated. Interracial marriage isn't an enumerated right or privilege under the Constitution.

And what makes anyone think Clarence Thomas can't live with that possibility? Ginni Thomas has been compromising his so-called objectivity for decades. In a perverse way, maybe he hopes some racist going after Loving v. Virginia will give him some breathing room: "Ginni, honey, you've got to move out until we get this whole constitutional mess about interracial marriage squared away. Gimme a kiss. Here are your bags."

Clarence Thomas may be one of the most malevolent jurists in American history, but right now, he's the most honest justice of the current majority. He tells you what the court is going to do next — and he means it. He still harbors anger from his humiliating confirmation hearing in 1991 in which then-Sen. Joe Biden presided; he's determined to make liberals and much of society cry.

Other justices on both sides of the ideological spectrum may be more esteemed and respected, but it is the angry man from Pin Point, Georgia, who controls the court's agenda. Even if he decides, like Black Bolt, to never say another word in public again, everyone knows it will be Clarence Thomas' fist on the scale of justice.