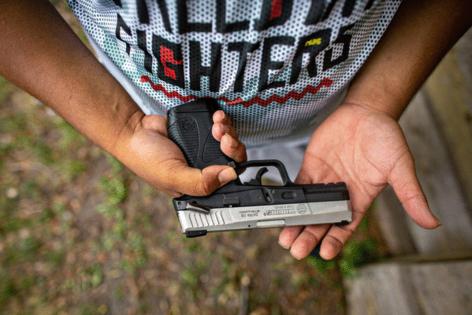 Nathan W. Jones leads the Bay Area chapter of the Black Gun Owners Association. But until a few years ago, he wasn't even into guns.

Then the COVID-19 pandemic hit. And George Floyd was killed by Minneapolis police, sending racial justice protesters into the streets. And white supremacists trashed the U.S. Capitol in the Jan. 6 insurrection.

Suddenly, it seemed as if America was on the brink. And with the Supreme Court's overturning of Roe vs. Wade on Friday, emboldening a militant array of white Christian nationalists, we clearly still are.

"I had visions of mobs dragging people through the streets, and something just kind of switched," Jones told me. "We can't rely on anybody else to come and save us. It has to be us."

So, on Thursday, while many were apoplectic over the Supreme Court's decision to uphold the rights of gun owners to carry a loaded weapon in public — throwing gun control laws in California and New York into limbo at a time when shootings are increasing — Jones was thoughtful.

On the one hand, he wants it to be easy for law-abiding citizens to be able to defend themselves "if and when the time arises." But on the other hand, he's a 50-year-old realist who knows that fear and hatred of Black people run deep in the United States, especially when we're armed.

"There's no overt racism when we go to the gun range, but we know how people are looking at us," Jones said of the dozens of Black members who meet up to go shooting. "We know the things that people think."

California Democrats are scrambling to craft and enact new legislation this week that would somehow salvage the requirement — assuming local law enforcement continues to enforce it — that residents get a permit before carrying a concealed weapon.

"Our state will continue to lead in the fight to keep our people safe," Gov. Gavin Newsom insisted on Thursday. Indeed, of all states, we have one of the lowest rates of dying by a bullet.

But the governor and lawmakers could fail, and the Supreme Court's ruling could stand. And then, California could be forced to confront a reality that has long made many self-proclaimed liberals uncomfortable: Black people — potentially a lot of us — legally carrying guns in public.

Lest you think I'm being facetious, recall how California got started on its journey to having the toughest gun control laws in the country.

It was in 1967 that members of the Black Panther Party for Self Defense staged a protest at the California Capitol. Armed with the handguns and shotguns they normally used to protect Black neighborhoods in Oakland by "policing the police," they announced that the time had come for "Black people to arm themselves against this terror before it is too late." And then they went inside.

"We have a constitutional right to bear arms," they shouted as they wandered the halls of the Capitol.

Lawmakers were so freaked out that they quickly passed the very bill the Black Panthers had been protesting — the Mulford Act, which banned the open carry of loaded weapons without a permit. Gov. Ronald Reagan signed it posthaste.

Over the next few years, the Mulford Act, which the National Rifle Association supported, inspired a slew of gun control laws in other states and Congress.

Of course, these days, the NRA is very much against gun control, although its stance on Black people doesn't seem to have changed very much.

Still, over the past few years as Americans have stocked up on guns at record rates, it is Black people — especially women — who have been buying them the most. Between 2019 and 2020 alone, there was a 58% spike, according to the National Shooting Sports Foundation.

Emmanuel Choice, who runs a Black gun club in Los Angeles, has watched this trend play out in Southern California. Black people are not only buying guns in big numbers, but eager to get the training to follow the law and handle them safely.

"This is not a country where you want folks just randomly walking around with firearms," said Choice, who thinks the Supreme Court's ruling on Thursday was shortsighted and reckless. "The one thing I will say about California and their concealed carry requirements is you got to get a lot of education."

Jones said he also has seen a huge uptick in interest in his Bay Area club over the past six months, often by Black people looking for camaraderie and an alternative to the NRA.

Most who join say they bought a gun for self-defense, Choice and Jones agree. Many reach out after getting — forgive the phrase — triggered by high-profile racist incidents, including last month's massacre of Black people at a supermarket in Buffalo, N.Y.

But even before that, during the height of the racial justice protests in 2020, Black people armed themselves and formed groups for self-defense and community protection in Minneapolis, Atlanta and Detroit, among other cities.

"Black folks are choosing more frequently and in greater numbers to be prepared," Choice said. "There's a concern that I haven't seen before. And there's a willingness to, you know, step up."

That meme that has been floating around social media for a few weeks — the one that half-jokingly suggests that Republican politicians could be prompted to support gun control if more Black people were to start packing heat?

Thing is, Black people are already packing more heat, both legally and, unfortunately, illegally. But gun control laws are still getting weaker — the rare exception being the bipartisan bill President Biden just signed.

And the other, truly weird thing is that race is now actually being used as an argument in support of loosening gun laws.

Justice Clarence Thomas, in his opinion for the Supreme Court's 6-3 conservative majority in the New York State Rifle & Pistol Association vs. Bruen case, waxed philosophical about how the right to bear arms was crucial for the self-protection of Black people in the South during Reconstruction.

And how in 1868, Congress "reaffirmed that freedmen were entitled to the 'full and equal benefit of all laws and proceedings concerning personal liberty [and] personal security ... including the constitutional right to keep and bear arms'."

Meanwhile, a coalition of progressive organizations, including the Black Attorneys of Legal Aid, the Bronx Defenders, and Brooklyn Defender Services, filed an amicus brief in the case, urging the court to rule exactly as it did.

Their argument? That gun control laws in New York, like California, disproportionately harm Black and Latino people who carry guns for self-defense. They complained of clients who have been "stopped, questioned, and frisked," and deprived of their livelihoods because they "exercised a constitutional right."

"We represent hundreds of indigent people whom New York criminally charges for exercising their right to keep and bear arms," they wrote. "For our clients, New York's licensing requirement renders the Second Amendment a legal fiction."

How all of this will play out remains to be seen.

Choice, the leader of the L.A. gun club, is doubtful that more Black people in Los Angeles will start carrying guns in public, even if doing so without a permit becomes common practice in California. It would just attract too much attention.

"I don't think I'm going to be going to Roscoe's to sit there with a sidearm," he said.

Besides, most Black people just want to come home safe every night and will avoid taking risks that could result in injury or death.

"No. 1 is the police. I don't want to interact with them ever. And they never give you a break when they pull you over, so you're always under suspicion," Choice explained. "So, if you have something under your seat, and you want to argue with them about the new ruling from... Please! Are you kidding me?"

But to Jones, this is part of the problem.

His gun club — like Choice's club — is full of Black professionals. Doctors, even cops. Law-abiding citizens with wives and husbands and children, and deep ties to their communities.

"Still, we know that all eyes are on us," said Jones, a business owner. "And so we also know that we cannot be the group that has an accidental discharge. We cannot be the group that is handling our firearms in an unsafe manner. We have to be more in control and knowing what we're doing more than anybody else, because all eyes are on us waiting for us to make a mistake."

Jones sees it as part of the mission of the Black Gun Owners Association to challenge preconceived notions many Americans have about who should and should not be able carry a gun. But he laments that this is the reality, even in liberal California.

If the Supreme Court's ruling sticks, Jones believes more Black people could start carrying their weapons in public — particularly if the white supremacists and Christian nationalists in our midst start doing the same.

In our polarized political environment, that's a dangerous scenario that seems increasingly likely. Just as likely as some Black people wrongly getting shot by police while legally carrying a firearm. When society is armed to the teeth, bad things are bound to happen.

Jones feels he has little choice but to be a gun owner, though.

"What we need to do," he said, "is redefine the notion of Black people with guns and what that means."

On Aug. 2, staid, conservative Kansas gave the United States one of the biggest jolts in an election season in which Democratic disaster and Republican ascension had been such an accepted fact that left-wing media’s ...Read More

One day, when he wasn’t around, a couple of the only FBI agents who were friends with former President Donald Trump raided Attorney General Merrick Garland’s office to produce evidence that he knew some of his actions ...Read More

When Democrats pulled ahead of Republicans recently in broad averages on the generic ballot, I didn’t believe it. We’ve seen many large polling errors in Democrats’ favor in recent years, a 50-50 House vote would ...Read More

We’ve become so numb, so accustomed to the sliding scale of right and wrong practiced by Donald Trump that it can be hard to see where the line is anymore.

But the news coming out of Mar-a-Lago after...Read More

New York’s Chautauqua Institution describes itself as “a community of artists, educators, thinkers, faith leaders and friends dedicated to exploring the best in humanity.”

On Friday morning, the worst in humanity ...Read More