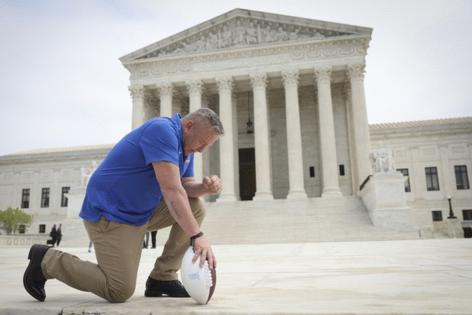 The Supreme Court on Monday took a significant step toward allowing prayer back in public schools. As with a decision last week that required the state of Maine to subsidize religious schools, the court rejected any notion of a wall separating church and state. Indeed, the conservative justices have again overruled a half-century-old precedent in moving constitutional law radically to the right.

In the early 1960s, the Supreme Court ruled that prayer in public schools, even voluntary prayer, violates the 1st Amendment’s prohibition against the establishment of religion. The court said that when teachers lead prayers, there is inherent coercion. Students of different faiths and of no faith feel pressure to participate. The core of the Establishment Clause is that the government, especially in its public schools, should be secular; the place for prayer is in people’s homes and places of worship.

The court strictly adhered to this principle for 60 years. In 1985, the court declared unconstitutional an Alabama law that required that public schools begin each day with a moment of silent prayer. In 1992, it found that clergy-delivered prayers at public school graduations are unconstitutional. In 2000, it ruled that student-led prayers at high school football games violate the 1st Amendment. All of these cases limited the speech and religious practices of the teachers and students who wanted to engage in prayer.

Monday’s decision, Kennedy v. Bremerton School District, involved Joseph Kennedy, a football coach at a public school in Bremerton, Wash. After games, Kennedy, a self-described devout Christian, would kneel at the 50-yard line to engage in a brief prayer, with students, parents and community members looking on. A majority of the players began to join him in this prayer. A parent complained to the principal that his son “felt compelled to participate” in Kennedy’s religious activity, even though he was an atheist, because “he felt he wouldn’t get to play as much if he didn’t participate.”

Over time, Kennedy began giving short motivational speeches at midfield after the games. Students, coaches and other attendees from both teams were invited to participate. During the speeches, the participants kneeled around Kennedy, and he delivered a message containing some religious content, including prayers. The school district ordered Kennedy to stop his religious activities. He initially complied and then defied the order and was suspended.

Both the federal district court and the 9th Circuit Court of Appeals ruled against Kennedy’s claims. But the Supreme Court, in another 6-3 decision, ruled that Kennedy’s constitutional rights to free exercise of religion and freedom of speech were violated.

Justice Neil Gorsuch, writing the majority opinion, declared: “Respect for religious expressions is indispensable to life in a free and diverse Republic — whether those expressions take place in a sanctuary or on a field, and whether they manifest through the spoken word or a bowed head.”

This approach has no stopping point. It would seem now that any public school teacher would have the right to lead students in prayer so long as it was before school, during breaks or at lunch rather than at formal school activities. Any restriction beyond that would be considered by this court to be an unconstitutional limit on the teacher’s speech and free exercise of religion.

It is unclear as to what, if anything, is left of the half-century of law recognizing that even “voluntary” prayer is inherently coercive in the public school context.

As Justice Sonia Sotomayor wrote in her dissenting opinion: “This case is about whether a public school must permit a school official to kneel, bow his head and say a prayer at the center of a school event. The Constitution does not authorize, let alone require, public schools to embrace this conduct.” It is long-settled constitutional law that, as she notes, “official-led prayer strikes at the core of our constitutional protections for the religious liberty of students and their parents.”

To get to this outcome, the conservative majority overruled a landmark 1971 case that set limits on government actions in cases involving the Establishment Clause. In doing so, Sotomayor wrote, the court “elevates one individual’s interest in personal religious exercise, in the exact time and place of that individual’s choosing, over society’s interest in protecting the separation between church and state, eroding the protections for religious liberty for all.”

This five-decade-old precedent, which preserved the wall separating church and state, has been discarded, just as Roe v. Wade was last week.

It is stunning how far and how fast the conservative justices have moved to overrule constitutional law principles in a single week. It’s clear that they would have decided countless cases over the last half-century differently from their predecessors, and have no hesitation eliminating precedents they don’t like. The implications for all of our rights and the society we will live in is staggering.

Erwin Chemerinsky is dean of the UC Berkeley School of Law and a contributing writer to Opinion. He is the author, most recently, of “Presumed Guilty: How the Supreme Court Empowered the Police and Subverted Civil Rights.”