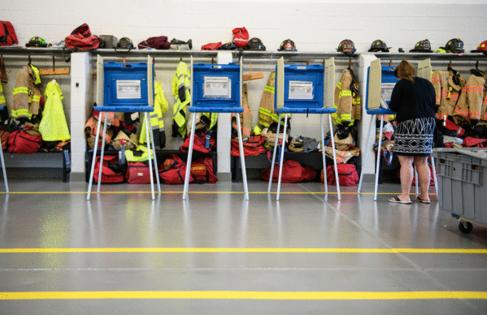 Conventional wisdom holds that America’s democratic norms are withering. It also asserts that high voter turnout signifies a healthy democracy. So does a record high voter turnout for this May’s midterm primary election mean American democracy is in better shape than it seems?

When people stampede to the polls, it’s not usually because they’re satisfied with the political system and love performing their democratic duty. It’s more likely because they’re frustrated with politics, or angry at specific politicians or “the system” in general. They usually fear what will happen if their opponents win.

History bears this out.

For instance, turnout hit a historic low in 1996, dropping below 50%. While some commentators wrung their hands about the apathy of the American people, during the generally prosperous and stable 90s, that apathy was at least as likely an expression of contentment as it was of cynicism. Ambivalence about who will be president may reflect a frustrating detachment from the duties of self-government — but also a trust that the country’s political system will be fine, regardless of who’s in charge.

The second-highest presidential turnout in history — about 81% of eligible voters — came in 1860, when Abraham Lincoln ascended to the office. (It had already risen to 79% in the previous election, when the issues were reaching a critical state.)

Aside from democratic enthusiasm, this turnout expressed a justifiable fear that the very future of the country depended on the results of the election. For Lincoln voters, a country run by the Democrats wasn’t worth living in, and supporters of John C. Breckenridge and Stephen A. Douglas generally felt the same about Lincoln. As we know, they ended up acting on that feeling.

The highest voter turnout? That was nearly 82% in 1876, when the question of the future of Reconstruction was on the ballot. The contested election resulted in a notorious compromise: The Republicans got their man, Rutherford B. Hayes, in the presidency, at the cost of removing federal troops from the former Confederacy.

When marginal voters start to flock to the polls, it’s not because they love the chance to participate in molding the country. It’s because they think things are going so poorly, and that the other side is so dangerous, that they must vote.

On the bright side, high turnout does show that, despite all the complaints about “election integrity,” people — however angry or frightened they are — still see elections as the most legitimate way to seek political power. For now.