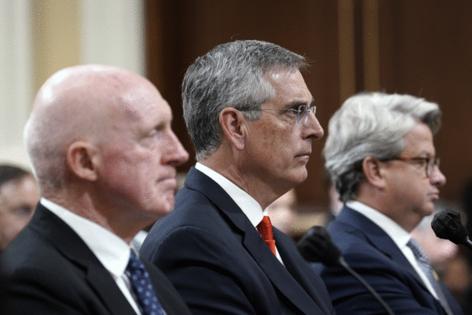 Some of the most harrowing testimony in the congressional Jan. 6 hearings has come from Republican officials in battleground states who endured tremendous pressure from Donald Trump and his allies to help overturn the 2020 election.

And not the normal kind of pressure politicians apply to each other.

Many of Trump’s followers went far beyond any reasonable attempt to influence these men and women. Anyone who didn’t completely capitulate when the former president tried to cajole them into supporting his scheme was harassed and threatened.

Georgia Secretary of State Brad Raffensperger refused the president’s demand to “find” just enough votes to flip the state. For doing his job properly, as the law required, his personal information was leaked online. Both he and his wife received death threats. The entire extended family lived in fear: His daughter-in-law’s home was broken into while she and he young children were there.

Arizona Speaker of the House Rusty Bowers received phone calls from Trump, Rudy Giuliani and Arizona Rep. Andy Biggs urging him to decertify his state’s electors. He refused and was rewarded with protests outside his home at which videos were played accusing him of sexual perversions. At least one protester brandished a gun. He and his staff received tens of thousands of abusive calls, texts and emails.

And in Pennsylvania, House Speaker Bryan Cutler, of Lancaster County, endured similar treatment. Provocateur Steve Bannon released his personal information online and urged protests at Cutler’s house, the first of which occurred while his teenage son was home alone. Cutler unhooked his home phone due to the abusive calls, one of which was made by someone who claimed to be right outside his house.

Giuliani and Trump attorney Jenna Ellis called him so frequently that he had his lawyers tell them to stop. They didn’t.

These Republican officials, and others, refused to use the power of their offices to advance the president’s false claims. Cutler did give more support than he should have to Trump’s efforts, by signing a letter urging the state’s congressional delegation to refuse to certify the state’s Biden electors. But this was a symbolic move compared to what Trump and his allies asked of him.

These GOP leaders were one of the last lines of defense between the country and a genuine constitutional crisis — and one that would have been achieved not by persuasion, but by force.

And they paid for it, in a way public servants should never have to pay for doing their duty.

Even if they weren’t perfect — even if some went too far in trying not to break with Trump — they behaved with praiseworthy honor.