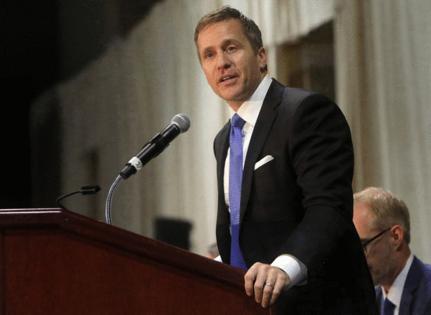 Did you hear the one about the Republican Senate candidate who suggested killing any Republican who isn’t deemed conservative enough? It’s a real knee-slapper. Especially with recent horrendous mass shootings, public officials getting death threats and the country watching a forensic review of how a former president’s violent rhetoric spurred the actual violence of Jan. 6, 2021.

Eric Greitens, the disgraced former Missouri governor turned Senate candidate, said last week he was just kidding around when he posted a violent video about “hunting” for “RINOs” (Republicans in Name Only).

The video “has a sense of humor,” said Greitens.

Which part was funniest? The comical brandishing of military-style assault rifles like the one that killed 19 children in Uvalde, Texas? Or perhaps the hilarious rhetoric about using violence to “save our country” — reminiscent of the language former President Donald Trump used to inspire thousands of his supporters to attack the U.S. Capitol.

If Greitens’ Senate bid doesn’t work out, maybe he should consider a career in standup comedy.

In the video, Greitens and some camouflaged pretend-commandos approach a house with rifles poised. Greitens — who, remember, was forced to resign as governor in 2018 amid allegations of corruption and physical abuse — whispers: “The RINO feeds on corruption and is marked by the stripes of cowardice.”

This is a man who has been credibly accused of abusing his wife, his children and his mistress. His definition of courage must be different from ours. (Greitens acknowledges the affair but denies the abuse.)

The commandos bash in the door, explode a stun grenade and barge into the room, assault rifles poised. Greitens follows them in, then delivers what he apparently considers a punchline about getting a “RINO hunting license.”

The Post-Dispatch’s Jesse Bogan last week looked at how Greitens’ video has landed in deep-red Missouri. What he found was, well, not funny. “People in St. Louis may not like it,” said former state Sen. Jane Cunningham, with Greitens at a campaign stop in Camdenton, near Lake of the Ozarks, “but by golly in Camdenton, in rural Missouri, that is a huge hit.”

If that doesn’t give pause to anyone who has seen this video, it’s difficult to imagine what would.

Greitens last week breezily dismissed the notion that his video portrayal of violence could prompt the real thing: “I don’t think there is a real person in Missouri who thinks about it literally. Not one.”

More than one, actually. Greitens’ ex-wife has received emailed death threats since the video was posted, according to the attorney representing her in their child-custody case. “ ‘Wouldn’t it be awful if someone hunted down and killed Eric Greitens and his entire family,’ ” the attorney quoted from one of the messages in a hearing Thursday. “The other one is so horrible I can’t read it aloud in court.”

What, they can’t take a joke?