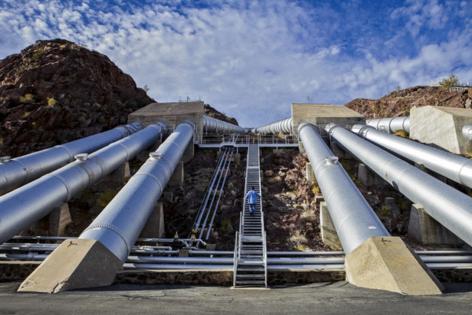 Already, residents face sharp new outdoor water restrictions June 1, and serious doubts over whether those limits will be enough to cope with a historic water shortage. It’s a good time to imagine the ideal California of the future, in which information technology and rational pricing make water conservation simple, understandable and a common way of life.

Here’s how it should work, as a resident pulls out his or her phone and at the touch of a button checks the household’s water use for that day in real time:

"Let’s see — four family members, 240 gallons. Not bad. That’s a couple gallons ahead of our pace for this time in the afternoon yesterday, and about on par for our average. We’ll be coming in at about 80 gallons a person by the end of the day, which is OK, but we can do better. It’s been overcast, so our soil and weather monitor has signaled our drip irrigation system to give a minute or so less of water to the flower bed. How are we doing compared with the rest of the neighborhood? Oh, look — out of the closest 100 homes, we’re number 47. Middle of the pack. That’ll do.

And since use is lower than the same period last year, we’ll get a rebate. Nice. Not like last year, when we had to pay double per gallon for using twice the base amount allotted to homeowners. Good thing our lot is small, because base rates are priced according to how many people live here, not how big the house and yard are."

Unfortunately, that’s not how things work now. Water bills arrive monthly or, for most residents in Los Angeles, every other month — far too late to respond to data indicating leaks in the plumbing or unsustainable outdoor watering. People who live in a perpetually dry environment but who want the luxuries of modern living — that’s all of us, Southern California — need detailed, real-time readings of their water use and the ability to adjust and respond to conditions.

The restrictions that kick in after Memorial Day aren’t based on how much water each resident uses, but how and when they use it. Banning outdoor watering during the heat of the day makes sense, because much of the water would be lost to evaporation. But restricting water use to certain days for residents with even-numbered addresses, and another day for their neighbors with odd-numbered addresses, is an emergency stopgap and not at all a way to move into a drier future.

Residents need a pricing structure, supported by state law, that permits a base per-gallon rate and higher price tiers for use beyond basic household needs. The pricing should encourage better decisions about how, and when, to use residential water. That’s not permitted under Proposition 218, a 1996 voter initiative adopted with taxes and not water rates in mind, at a time when the change in climate patterns was not yet widely acknowledged.

As for help with conservation, public and private water agencies already do a pretty good job with many important conservation programs, including offering rebates for ripping out thirsty lawns in favor of water-thrifty landscapes, and for installing modern appliances and fixtures to replace water-guzzling toilets, washing machines and showerheads. The Los Angeles Department of Water and Power is one of many utilities that offer useful information on installing gray water systems that direct used water from bathtubs and dishwashers to the garden. That’s all good. Keep it up.

But it’s not enough. The engineering of dams and aqueducts was timely in the 20th century, which appears to have been an unusually wet period in the geologic time scale of California. If we are now reverting to a drier norm, when those reservoirs will never again be filled, we need to make better use of the knowledge technology — the phone apps that keep water users up to date in real time and allow immediate decisions based on use patterns and weather conditions.

And finally, municipalities, water agencies and state leaders really ought to stop talking about “drought.” Droughts are dry periods that end when the rains return. But the weather patterns of the prior century won’t likely be returning. Emergency conservation measures won’t be enough. California needs a permanent infrastructure of technology, law and culture made for a state that’s drier than the one we once knew, but that still has sufficient water for an abundant life.