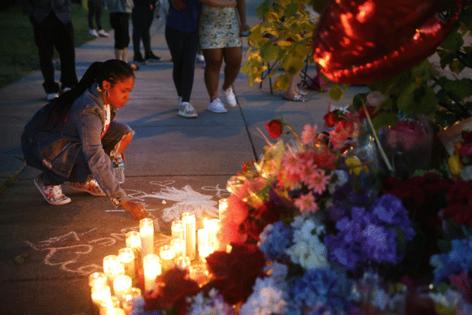 Talk about a sad coincidence.

On Saturday I spent the afternoon with a book on the history of the 2nd Amendment, then turned on cable news: While I'd been reading, millions of Americans were grocery-shopping; in Buffalo, New York, 10 of them, all Black people, were massacred, allegedly by an 18-year-old white supremacist with an assault rifle.

Yet it really wasn't such a coincidence that my research for this column suddenly was newsy, given the regularity of gun violence in this country. Last weekend, mass shootings afflicted eight cities including Laguna Woods, injuring 65 people and killing 17, among them the 10 innocents in Buffalo.

Just over half of Americans support stricter gun laws, a share that's down from recent years as the pro-gun views of Republicans and Republican-leaning independents have hardened. There is greater and bipartisan support for some controls, such as universal background checks and barring sales to people with mental illnesses. Yet the gun lobby and the Senate filibuster have blocked even those sound ideas for years. And the body count climbs.

In defiance of common sense, this epidemic of American gun violence, which increasingly includes domestic extremists and others poisoned by online hate, is occurring even as the federal courts and many legislative bodies have become more hostile to firearms restrictions.

The Supreme Court seems poised to expand gun rights in a case involving a New York state law that restricts carrying a gun outside the home. And it could do so in a way that would call into question countless statutes restricting gun ownership in other states and cities, as well as lower-court decisions that have upheld such laws.

That outcome would be another sign of the judicial activism, even radicalization, of a court where six mostly hardcore conservative justices now make up a supermajority. The decision is expected before the court's term ends next month, along with other potentially landmark rulings on abortion rights and federal regulations.

The Supreme Court probably wouldn't even be considering the New York case but for that conservative supermajority, created because one-term President Donald Trump got to pick three justices rather than the one he was rightfully entitled to name. We have Senate Republican leader Mitch McConnell's dirty politics to blame for that. Similarly, Trump appointees populate many of the federal appellate courts just below the Supreme Court.

It was two of those Trump judges on a three-judge panel of the 9th Circuit Court of Appeals who, just days before the teen suspect's alleged racist rampage in Buffalo, struck down California's ban on the sale of semiautomatic rifles to adults younger than 21. Another sad coincidence.

A passage from the 9th Circuit opinion on May 11 celebrating young gun owners was outrageous, doubly so when reread as Buffalo mourned and as Americans recalled past victims of underage shooters with easy access to military-style weapons — at Oxford High School in Michigan last year, at Parkland, Sandy Hook, Columbine. Current or former students commit about half of school shootings.

"America would not exist without the heroism of the young adults who fought and died in our revolutionary army," Judge Ryan D. Nelson wrote rhapsodically. "Today we reaffirm that our Constitution still protects the right that enabled their sacrifice: the right of young adults to keep and bear arms."

Nelson's facile bit of Revolutionary-era history there was in keeping with the misleading, cherry-picked narrative behind the Supreme Court's landmark Heller ruling in 2008 by a 5-4 conservative majority. For the first time in more than 200 years, and contrary to four prior decisions over that time, the justices said the 2nd Amendment established a constitutional right for individuals "to keep and bear arms."

Respecting the rule of law, I accept that decision. But I vehemently disagree with it. I'm in good conservative company in believing that the founders intended the 2nd Amendment to protect not individuals' rights, but the rights of states to arm their own militias, without interference from the federal government.

Decades before Heller, amid the early efforts of the National Rifle Assn. and its allies to popularize this revised history about individual rights, former Chief Justice Warren E. Burger, a Nixon appointee, said in a 1991 PBS interview that the 2nd Amendment "has been the subject of one of the greatest pieces of fraud, I repeat the word 'fraud,' on the American public." After Heller, among the harshest critics were leading jurists on the right, including appellate Judges J. Harvie Wilkinson III, Richard Posner, Frank Easterbrook and J. Michael Luttig.

The book I just read, "The Second Amendment: A Biography," by Michael Waldman, president of the Brennan Center for Justice at New York University School of Law, is full of historical evidence, from the founders' debates through the two centuries that followed. "I didn't know I was going to find evidence to that degree," Waldman told me. "When I tell audiences, they can't believe it."

For example, the notes of the Constitutional Convention have "not a single word," Waldman writes, about an individual right to a gun, except for membership in state militias.

Now, 230 years later, we're again talking about militias' gun rights. Except these modern militias aren't of the government but against the government. No coincidence there, sadly. And definitely not what the founders had in mind.

Some of the most harrowing testimony in the congressional Jan. 6 hearings has come from Republican officials in battleground states who endured tremendous pressure from Donald Trump and his allies to help overturn the 2020...Read More

Did you hear the one about the Republican Senate candidate who suggested killing any Republican who isn’t deemed conservative enough? It’s a real knee-slapper. Especially with recent horrendous mass shootings, public ...Read More

This July 4, try eating green when you celebrate the red, white and blue. Environmental scientists say that phasing out animal agriculture and eating vegan is “our best and most immediate chance to reverse the trajectory...Read More

In my first journalism job, I wrote two obituaries and edited 17. They were about the classmates and teachers who died in the mass shooting at my school.

In my first journalism job, I hid from an active shooter inside the...Read More

The last few years have seen one distressing news story after another about the scourge of plastic waste: Single-use plastic packaging dumped in the ocean is killing sea animals who mistake it for food. Elephants in Sri ...Read More