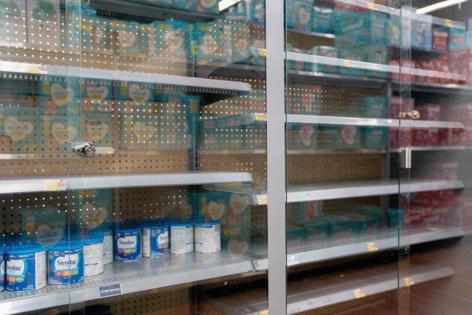 Startup Bobbie introduced its infant formula product in January 2021, the first new brand to be approved for sale in nearly a decade. It was a small operator representing a tiny fraction of the $4 billion U.S. formula market, but when shortages began roiling the industry in recent months, Bobbie offered at least one more option for rattled parents to turn to. The story of this young company — and this critical moment of disruption — illustrates why innovation is desperately needed in an essential-food industry that’s both antiquated and paralyzed by consolidation.

Bobbie was created in 2018 when Laura Modi, an executive at Airbnb Inc. who had just given birth, found herself dissatisfied with the formula options available in American grocery stores. Ireland-born and living in San Francisco, Modi found that many of her friends were buying European products off what she calls “the infant formula black market” — via third-party distributors such as EBay and through direct sales between moms meeting in online parent forums. The E.U. formula had higher nutritional standards and healthier ingredients, and well-heeled moms were willing to pay a hefty premium to get it — even if it was contraband. E.U.-produced formula isn't subject to Food and Drug Administration oversight, and therefore can’t be legally sold in the U.S..

Modi dived into research and found that U.S. infant formula standards hadn’t (and still haven’t) been meaningfully updated since the Infant Formula Act of 1980. Meanwhile, E.U. infant formula standards were updated regularly as the science of infant health evolved. Modi was convinced that the rising generation of young mothers would prefer innovative products over the Similac, Enfamil and Gerber brands that dominate 90% of the market. She quit her job, raised capital ($72 million to date) from investors including Goop CEO Gwyneth Paltrow and actor Laura Dern, and co-founded Bobbie with her Airbnb colleague Sarah Hardy, the startup’s chief operating officer.

Modi and Hardy entered a market struggling with a contradiction: On the one hand, it needs improved nutritional standards and better FDA oversight; on the other, the market needs new players and more competition. Not only is the U.S. infant formula industry — aka “Big Bottle” — heavily dominated by three aging brands, only seven production facilities have been approved by the FDA to manufacture all the powdered and liquid formulas sold nationwide.

These products are essential to the survival of millions of infants, yet the supply chain is extremely consolidated and therefore vulnerable. In February, the industry was predictably thrown into chaos when Abbott Laboratories recalled some of its formula brands, including Similac, and shuttered its Michigan production facility to investigate contamination. In one fell swoop, a third of all infant formula products vanished from store shelves.

The challenge going forward for the Biden administration's FDA is to simultaneously raise its quality standards for infant formula while also encouraging new young players to enter the market. This can be done. The evidence is clear in the European market — in particular in Germany, which has not only the world’s highest nutritional standards for infant formula, but also more available brands and more numerous and distributed production facilities.

The Biden FDA has made important progress in shoring up formula production in the past week, first having reached an agreement with Abbott on a plan to safely re-open its production facility, which should significantly restore product volume in the next two months. The administration has also eased restrictions on foreign imports of infant formula products that until now have not been allowed on American shelves. On Wednesday, Biden invoked the Defense Production Act to help revive the supply chain for baby formula ingredients and authorized the use of military planes to fly in foreign-made products. Also critical was President Biden’s decision to increase funding to the FDA, a notoriously understaffed agency that had only nine people working to alleviate the infant formula shortage. With the new funding it has been able to hire four more.

But these are stopgap strategies. The agency needs to build long-term solutions to ensure the security of infant formula production in the future. The administration should permanently allow for the sale of approved foreign-made baby formulas on the U.S. market. It should also require that any company commanding more than 20% of the baby formula market maintain a backup supply of product in case of recall.

When the House Agriculture Appropriations Committee discussed the fiscal year 2023 budget of FDA Commissioner Robert Califf this week, members should have pushed for more significant long-term increases to FDA funding that can help usher in industry-wide reforms. There’s no question that raising nutritional standards while also guiding new producers through the product approval process will take a substantially funded, better-staffed and more nimble FDA.

Infant formula falls right in the middle of drugs and food on the regulatory spectrum, which means it requires rigorous testing not just for nutritional quality, but for bacterial and heavy-metal contamination, as well as for shelf stability. Moreover — with the exception of Biden's emergency measures — all infant-formula products sold in the U.S. must be produced domestically.

Modi learned this the hard way: With such limited production capacity in the U.S., she produced her first run of products in 2018 in Germany, which she later had to recall. She spent another two years retooling her supply chain and working with her manufacturer to produce the formula in Vermont.

Over the last 40 years, scientists have identified the fatty acid DHA as a critical ingredient in infant formula to support infant brain development. In the U.S., infant formula companies aren't required to include DHA. Some do include it, but in the E.U., you can't buy an infant formula without a high level of DHA. The E.U. also puts a cap on the use of sugars, like corn syrup, and the U.S. does not. All U.S. products should be required to meet higher standards.

There will be a price to pay. Since Bobbie has based its products off the latest 2019 E.U. standards and established a resilient supply chain, its cost of production is higher than that of the major players, and even of smaller brands: $1.84 an ounce compared with other premium organic products such as Earth's Best, which sells for $1.48.

The company’s rapid growth so far should allow these costs to come down with economies of scale. Bobbie’s sales reached $18 million in its first year, compared with the $4 million Modi originally projected, just by selling direct to consumers online. In 2022, Modi expects to quadruple that growth.

Bobbie shows there is a path forward in this nearly impenetrable U.S. industry, while also revealing the challenges inherent in redefining an essential food. Both the Biden administration and its critics can learn from this young business to build a strategy to protect infant health while creating the conditions necessary for new players in the industry to succeed.

Amanda Little is a Bloomberg Opinion columnist covering agriculture and climate. She is a professor of journalism and science writing at Vanderbilt University and author of “The Fate of Food: What We'll Eat in a Bigger, Hotter, Smarter World.”