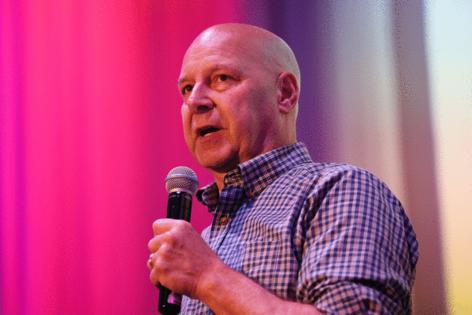 In my heart of hearts, I don't believe newly minted Pennsylvania GOP gubernatorial nominee Doug Mastriano has a snowball's chance in a burning hell of being elected Pennsylvania's next governor.

Simply put: State Sen. Doug Mastriano, R- Franklin, is a theocrat, and an unapologetic one at that.

According to the New Oxford Dictionary, a theocrat is "an advocate of a system of government in which priests rule in the name of God or gods."

It isn't a pretty word, especially to folks who value the separation of church and state. Theocrats have been a pox on this land since Plymouth Rock. They've had a variety of intimidating names and have rebranded their movement for changing times. In the '70s and '80s elitist theocrats called themselves Theonomists. They had an enormous influence on what was then called the religious right.

The definition of Theonomy according to Wikipedia is: "a hypothetical Christian form of government in which society is ruled by divine law." Let that sink in folks. Wikipedia continues:

"Theonomists hold that divine law, particularly the judicial laws of the Old Testament, should be observed by modern societies. The precise definition of theonomy is the presumption that the Old Covenant judicial laws given to Israel have not been abrogated, and therefore all civil governments are morally obligated to enforce them (including the specific penalties)."

Think about the absurdity of that. In an American theocracy, abortion under all circumstances would be outlawed, but Old Testament law will allow you to kill your rebellious teenagers for "disobeying" you. You can also put the women, children and unborn babies of the enemy to death in particularly grisly ways during wartime. This sounds a lot harsher than Roe v. Wade.

I had a good friend in college who was slowly radicalized by theonomy. Happily, he's no longer in that camp, but several decades ago he subscribed to every one of its most extreme precepts because he genuinely believed God wanted Christians to take "dominion over every area and institution of American life" by force, if necessary. If blood had to flow, so be it.

In those days, my friend called himself a Dominionist or Christian Reconstructionist. This definition from Wikipedia accurately describes what he once believed:

"In keeping with the cultural mandate, Christian reconstructionists advocate theonomy and the restoration of certain biblical laws said to have continuing applicability. These include the death penalty not only for murder, but also for propagators of all forms of idolatry, open homosexuals, adulterers, practitioners of witchcraft and blasphemers."

You're probably detecting a theme running through these descriptions. There's no room for grace, forgiveness or mercy in these movements. Jesus Christ and the turn-the-other-cheek love-thy-neighbor ethic of the New Testament is completely missing because it would undermine the blood-soaked mission of the theonomic state.

Theonomy, Christian Reconstruction and Dominionism are perfectly distilled in the theology of the Christian Praetorian guards that sprung up around Donald Trump during his presidency.

Doug Mastriano is one of these theocrats. He's a happy, holy warrior for Trump not because he's under any illusion that the former president is a "believer," but becausehe is convinced that God is using Trump to usher in an era of "Christian" control of government — fascism with a faith-based face.

The most accessible term for this kind of totalitarian delusion is Christian nationalism. This sounds like something an unsophisticated patriot can grab onto and not feel self-conscious about. Being a Christian is good, right? Being a patriot is even better — so the two should go together like peanut butter and chocolate.

Here's what Mastriano told his followers on Tuesday night after his decisive victory over a large Republican field: "We have the power of God with us," he said during his victory speech. "We have Jesus Christ that we're serving here. He's guiding and directing our steps."

Lest someone think I'm cherry picking quotes to fit an outrageous premise, I challenge readers to go through a Mastriano speech and not find a quote that proves I'm correct. Here's a line from a speech he made in April:

"The forces of darkness are hitting us really hard right now," he told a crowd of adoring white Christian nationalists. "We're going to bring the state back to righteousness, this is our day, our hour to take our state back and renew the blessings of America."

Mastriano's crowd, especially the rural, evangelical and Pentecostal folks that form his base, are tired of a wimpy version of Christianity content to "feel your pain" rather than inflict it. If Jesus lacks the intestinal fortitude, thank God Trump and Mastriano are walking the earth.

On Jan. 6, Mastriano and his wife led a convoy of buses to Washington, D.C., to the "Stop the Steal" rally. That was the day that our insurrectionist former president gave his followers permission to attack the government under the false pretense that the 2020 election had been "stolen" from him. Mastriano swears he didn't breach the Capitol, though he was videotaped well beyond the barriers that failed to keep out the mob.

After Trump's election loss and even after the anarchy of Jan. 6, Mastriano refused to back down from his allegiance to the former president or his lies. In fact, Trump has yet to tell a lie that Mastriano hasn't co-signed. Trump returned the favor by endorsing his sycophant's gubernatorial run — once it became clear he was ahead of the pack.

If someone like Doug Mastriano were actually elected governor of Pennsylvania, there is no doubt he would do his best to roll back the clock to the Bronze Age where men and God knew their places in the world. His fanatical ambitions won't succeed, but it doesn't make any sense to give a theocrat any rope with which to hang our democracy. Doug Mastriano is a theocrat. Full stop.