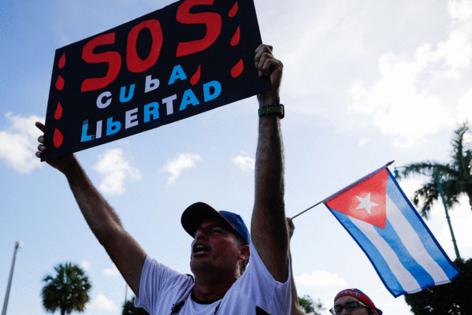 Who benefits from President Joe Biden’s sudden U.S. opening to repressive communist Cuba? Not American democracy — and not Florida, where the move almost feels like a betrayal by Biden and his administration.

The president, who lost Florida to Donald Trump, underestimates the stakes.

The political calculus is that Biden didn’t have those voters, now newly angry at his Cuba policy, in his corner to begin with. But Biden and his inept advisers miss the larger picture.

The battle for the political soul and future of this country is being waged in the Sunshine State, which has gone dark playing extremist politics. This is the birthplace of the successful Republican conspiracy theory, now bandied about nationally, that Democrats are socialists and communists.

The lie is a useful tool that wins the GOP elections. And, as we’ve seen during the last two legislative sessions in this once purple and now red-dominated state, those elections result in the loss of civil rights for mostly Democratic-leaning residents.

So why would a Democratic administration — faced with an increasing number of Hispanic voters buying the GOP narrative and embracing conservative Republican politics — give them reasons to believe that the left-wing rules the party?

It’s as if someone were intentionally checking off a list of Florida Hispanic voters Democrats think they can afford to dismiss.

The president has surrendered not only the state but the center Democratic narrative to the master spinners of Commie lore, frenemies Donald Trump and Ron DeSantis, pillars of authoritarian Republicanism and “Make the United States Florida” ambition.

Six measly months before the midterm and gubernatorial elections in Florida, Biden has committed political suicide, leaving campaigns like that of Orlando Congresswoman Val Demings against Sen. Marco Rubio struggling to distance themselves from the president.

“We don’t help anybody by appeasing socialist dictators,” Demings said.

The administration’s policy shifts in the Americas have blindsided Florida Democrats running in tough races against extremist Republicans. And, for what? For Biden to run a fool’s errand: extending an olive branch to the repressive regimes of Cuba and Venezuela with histories of not ceding an inch of space.

“They f---ed us, they really f---ed us,” said an angry Democratic operative in Miami working on some strong campaigns to counter fascist rhetoric in the Cuban community. “It’s almost as if there were Republicans [in the Biden administration] doing the work.”

Biden torpedoes a moment in which DeSantis and the GOP have angered groups of voters with divisive, restrictive legislation setting back gays, Blacks, business owners and women.

Instead of inspiring confidence in disaffected Republican, Democratic and independent voters horrified by DeSantis’ and the Florida Legislature’s extremist rule, Biden stoked fears that his administration is beholden to an American left that still admires Fidel Castro and his legacy.

By delivering a new Cuba policy that infuses cash into the pockets, not only of Cubans with relatives in the United States but also a repressive government quashing dissent at every turn, Biden pleased a left wing of his party using a 1960s playbook in which Castro portrays himself as a messiah of Afro-Cubans.

In 2022, nothing could be farther from the truth.

The island-wide July 11 protests in Cuba — grassroots and supported by the Cuban left on the island and in exile — reset politics.

The clarion call for democracy was birthed in one of Havana’s poorest Black neighborhoods by Afro-Cuban artists who now sit in prison facing long sentences. It was the Cubans’ powerful BLM moment, and a very unpopular white man, dictator Miguel Díaz-Canel, steamrolled it in the most vile way, urging Cubans to fight each other in the streets, and when that failed to silence people, unleashing military forces on the population.

If Biden bungled this moment, I wrote back then, he could kiss Florida goodbye.

And now he has.

The president needed to step up his leadership, see the Cuban people’s fight for democracy as his own struggle for civil rights in the United States.

He needed to persuade the Democrats in Congress lobbying him on behalf of the Cuban government to play nice with oppressors — the usual lot of California and New England liberals — that they’re on the wrong side of history.

Instead, Biden and his administration took the easy way out with the same Obama policy that the Cuban government ran circles around.

What happens in Cuba — and how Washington reacts — has tremendous reverberation in Florida. And I hate to even say it, but the United States’ future as a right-wing nation is being forged right here.