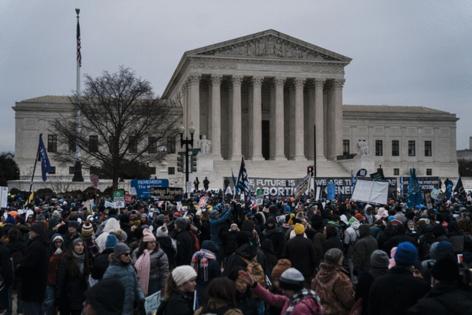 Why not leave abortion to the states?

One of the most common arguments made by those who want to downplay the significance of Supreme Court Justice Samuel A. Alito Jr.’s leaked draft opinion in Dobbs v. Jackson Women’s Health is that it would not make abortion illegal. Rather, it would merely return the abortion debate to the legislative sphere, where it belongs. Individual states would pass their own abortion laws, as restrictive or nonrestrictive as their electorate wants them to be.

There is a certain soothing quality to that argument. But issues of individual rights bearing such heavy moral weight cannot be contained within state boundaries. “Let’s leave it up to the states” will quickly become “we expect other states to comply with our laws and will demand federal action to guarantee it” — and one only needs to look at the Fugitive Slave Act to highlight the very real constitutional challenge before us.

Slavery remains a moral stain on the history of the republic. It demonstrated the weaknesses of American federalism when faced with fundamental issues of human rights. Even as individual states chose different paths on slavery, the question of how to manage relations between slave and free states, and what to do about people who traveled across state lines, became a persistent problem. The Fugitive Slave Act, a revision of a 1793 statute enacted as part of the Compromise of 1850, aimed to offer a legal solution. It allowed California to enter the Union as a free state, but required all states, even those that did not allow slavery within their boundaries, to cooperate with the forcible return of escaped enslaved people.

Moral and legal complexities multiplied. There was the internal warfare of “bleeding Kansas” where pro- and anti-slavery militias fought for control of the territory, and the barbarity of the Dred Scott decision, which denied enslaved people human rights even if they lived in free states. Allowing slavery anywhere required protecting it everywhere. Subsequent compromises that favored popular sovereignty, allowing local majorities to endorse or reject slavery, never satisfied pro-slavery factions if they lost out, and anti-slavery states proved reluctant to help slave catchers.

Federalism did more to exacerbate regional divisions on slavery than solve them. This is the context for Abraham Lincoln’s proclamation that the nation could not continue “half slave and half free.” Indeed, when South Carolina announced its decision to secede in December 1860, its grievances included the charge that the federal government had not done enough to ensure that all states enforced the Fugitive Slave Act. Denouncing “an increasing hostility on the part of the non-slaveholding States to the Institution of Slavery,” which “led to a disregard of their obligations,” South Carolinians claimed the northern states had essentially canceled the Constitution. By this logic, there could be no guarantee of any state’s rights unless other states respected and supported them. Enforcement of state laws could not end at the state line.

State legislation of abortion could easily create similar paradoxes, especially considering the mobility of people, ideas and goods in our globally linked world. Citizens in a state that bans abortion could travel to other states for the procedure, if they have the means. Gov. Gavin Newsom has made it clear that California will welcome out-of-state patients and Connecticut has already passed a new law protecting medical providers who treat patients from other states. Some large employers, such as Tesla, have recently signaled their willingness to support employees who need to travel to another state for medical care.

Yet the drafters of Mississippi’s abortion law did not go to all this trouble to overturn Roe v. Wade just see it persist elsewhere. Texas’ anti-abortion law already criminalizes aid to women who want an abortion — does that include those who provide travel assistance to a more permissive state? What if a resident of a state that allows abortion has a medical emergency while visiting a restrictive state and cannot travel home?

Florida’s recent struggle with Walt Disney Co. after its leadership spoke out against the so-called “Don’t say gay” bill indicates how states might deal with businesses that challenge their abortion legislation. Furthermore, in an era when medication abortions already make up more than half of the U.S. total, what happens when a state forbids its citizens from ordering such drugs by mail or seeking consultations by telemedicine with a practitioner in a permissive state?

The paradox of states eventually demanding federal recognition and support for their particular laws applies to more than just abortion. In the 20th century, locale-by-locale alcohol prohibition led to a constitutional amendment (and then to its repeal); marijuana laws and gun rights raise similar problems today. States struggle to manage different local laws on issues with which people deeply disagree, as do citizens, especially if they regularly travel from one jurisdiction to another.

Federalism, which allows individual states to become laboratories of democracy by experimenting with different approaches to public problems, is one of the great strengths of our constitutional order. But the republic has to guarantee some baseline rights shared by all citizens, which imposes limitations on how widely states can diverge.

There are few options for resolving conflicts among state laws. The Constitution can be amended, which takes time and requires a great deal of consensus. Or Congress can pass national legislation. If neither happens the issue lands at the Supreme Court.

That was the reality that led to Roe in the first place, and it has not changed. Tossing the issue back to the states, as the Alito draft proposes, will not bring the country any closer to a resolution on abortion rights — it will just open up 50 new fronts in the fight. The formal decision on Dobbs will not be the last federal word on abortion. This isn’t the end of the controversy; we’re barely at the start.