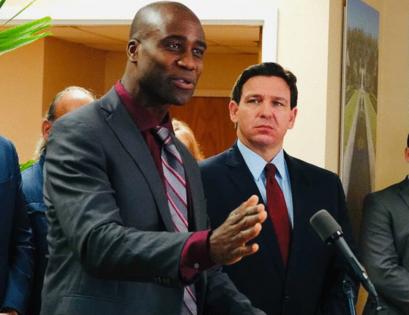 After Agriculture Commissioner Nikki Fried claimed that Florida might allow nearly 1 million COVID-19 tests to expire, a spokesman for the Department of Health sent out this tweet:

“Nikki Fried needs to turn on that blinker and get back in her lane.”

In fact, Fried was doing her job on the pandemic. If only we could say the same about Gov. Ron DeSantis.

We can understand the DeSantis administration’s knee-jerk hostility. Fried is one of several Democrats running to challenge the governor this year. She has every reason to point out the administration’s failings.

This time, however, Fried was right. So as DeSantis touted his plan to send 1 million tests to nursing homes, he had to explain why he nearly wasted almost that many and then tried to lie his way out of it.

The tests were due to expire at the end of September. The Food and Drug Administration granted an extension. DeSantis — naturally — blamed the Biden administration for not granting another 90-day extension.

But the state hadn’t asked for one. State officials offered the excuse that demand had been low at the end of the year.

Really? News of the omicron variant and its high transmission rate came the day before Thanksgiving. Many more Floridians suddenly wanted to be tested.

During December, however, DeSantis had other priorities. There was the “STOP W.O.K.E. Act.” He also announced action against the “Biden Border Crisis” and “Communist China and Woke Corporations.” There was nothing about COVID-19 test kits.

Trying to clean up the mess, the Department of Health spokesman said Florida hadn’t wanted to give out faulty tests. On Tuesday, however, the Miami Herald and Tampa Bay Times reported that the state had asked for and received another three-month extension.

Translation: Nikki Friend was in her lane.

We can understand the frustration with quickly changing guidance from federal health officials on the quickly spreading omicron variant. The Centers for Disease Control and Prevention lowered the recommended quarantine time from 10 days to five days after businesses — notably airlines — complained that the longer period could lead to even more problematic labor shortages.

All along, however, the CDC and the Biden administration have stressed the need for widespread testing. Meanwhile, DeSantis and his feckless surgeon general, Joseph Ladapo, have downplayed it.

In fact, Ladapo recently said that only symptomatic people should get tested. DeSantis agreed, saying that he would get tested only if he showed symptoms.

This crackpot recommendation ignores the fact that asymptomatic people can spread the disease, some of them quite efficiently. Correctly, the CDC recommends that anyone exposed to COVID-19 get a test, however hard that test may be to find.

We also would note that DeSantis’ wife is undergoing treatment for breast cancer and thus is especially vulnerable to a COVID-19 infection. Would DeSantis really refuse a test if he were exposed?

In addition, widespread testing offers the best chance to keep students in schools. While DeSantis talks about getting tests to nursing homes, the Biden administrations talks of getting 10 million tests to schools — each month.

There’s another problem with DeSantis’ over-65 focus, which he first used a year ago with vaccines. Only 6% of Floridians over 65 tested positive last week. For those in their 20s, it was 35%.

Perhaps DeSantis and Ladapo want less testing because, as Donald Trump incoherently stated when he was president, more testing means more cases. And that looks bad.

If so, it’s far too late for damage control. On Wednesday, Florida reported nearly 72,000 new cases — more than times higher than the world record the state set in mid-2020. Hospitalizations are at levels that preceded the record-breaking death counts last fall.

Avoiding a repeat, or worse, would have meant DeSantis and Ladapo undertaking a campaign to promote vaccinations. Even with omicron, the numbers reinforce the importance of the shots.

But Ladapo has falsely doubted the efficacy of vaccines. DeSantis hasn’t pushed them for months and he continues — in his juvenile way — to denigrate Fauci. Florida still ranks just 22nd for percentage of population fully vaccinated.

While the latest COVID-19 surge builds, DeSantis continues to stress wedge issues that matter to his presidential dreams. The state, however, has real needs. Stay in your lane.