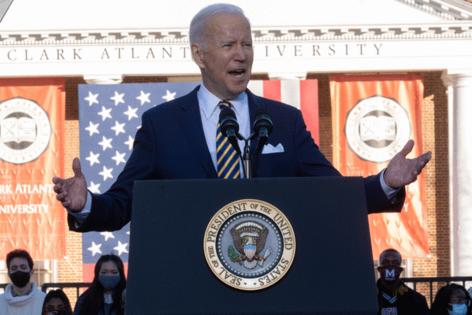 While President Joe Biden is off doing Civil War reenactments, American families are left trying to balance household budgets that are being smashed by soaring prices. Inflation topped 7% in 2021, the largest surge in consumer costs since 1982.

Break out basic necessities, and the inflation impact is even more devastating:

— New vehicles climbed nearly 12%, and used cars and trucks by more than 37%

Americans who live closer to reality than Biden does are far more concerned with those distressing price tags than they are his trumped-up claims of war on democracy.

The White House defends Biden's avoidance of inflation by saying there's little a president can do about rising prices. They blame the pandemic and breakdowns in the supply chain for driving up costs.

That's only partially true. Certainly, the disruptions of COVID-19 continue to strain the workforce and the ability of producers to meet demand.

But policies have consequences, as does a lack of policy.

Biden has not detailed an urgent response to inflation, and much of what he's done in other areas has helped fuel the price spikes.

His American Rescue Plan pumped $2 trillion into the economy last spring. That created a surge in consumer demand that arrived well before producers were prepared to meet it.

Provisions of that package, including extended unemployment benefits and pull-ahead child tax credits, lessened the incentive to return to work. Workforce participation remains below where it was at the start of the pandemic in 2020.

Biden has also tightened the screws on the oil and gas industry, restricting drilling, withdrawing tax credits, killing pipelines and placing wide swaths of the country off-limits to oil and gas exploration. Domestic oil production is 2 billion barrels a day below pre-pandemic levels.

In addition, Biden has ignored his campaign promise to "shut down the virus." Nearly as many Americans have died of COVID-19 during his tenure as before he took office.

If not the pandemic, what was the president thinking about?

Forcing through his far-left agenda. And that remains his priority.

The only answer the White House has offered for countering the impact of higher prices is passage of Biden's massive $5 trillion "Build Back Better" bill, which will flood even more government cash into the economy and make it even easier for workers to turn down jobs.

The Federal Reserve, which bears responsibility for keeping inflation in check, now considers inflation a serious threat. Chair Jerome Powell, when he spoke to Congress Tuesday, struck a different tone from last year, when he and Treasury Secretary Janet Yellin labeled inflation "transitory."

The ed has stopped its monthly $40 billion purchase of mortgage securities, which may help cool the overheated housing market. And an interest rate hike is expected.

Leaving the Build Back Better bill on the shelf would also help ease inflation fears.

Having let inflation go untended for so long, the Fed and the Biden administration now face a delicate balance. If they move too aggressively, they risk plunging the economy into recession.

This work requires Biden's full attention. He must move with skill and deliberation to keep soaring prices from overwhelming the paychecks of Americans.