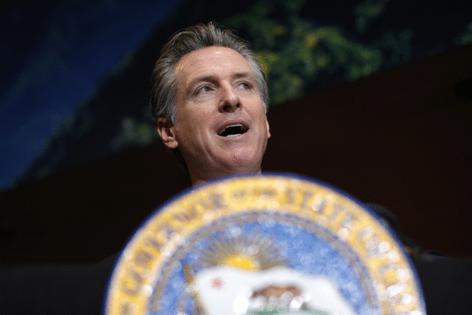 SACRAMENTO, Calif. — A contentious single-payer universal health care bill has cleared its first hurdle — but because of political courtesy, not policy accord.

It seems to face a very bumpy road ahead that, at this juncture, looks to be probably impassable.

One obstacle for the Democratic measure is lack of support from Gov. Gavin Newsom.

The governor is taking a more pragmatic approach toward universal coverage, pushing something that's very doable politically: allowing all low-income immigrants living in the country illegally to be eligible for the state's Medi-Cal health care program.

That would be a major step, but less ambitious than the legislation approved Tuesday night by the Assembly Health Committee after a long, combative hearing.

The bill, AB 1400 by Assemblyman Ash Kalra (D-San Jose), would tear down California's present system of health care coverage and completely rebuild it. Insurance companies would be removed from the picture.

All Californians would be switched from their present coverage — whether private insurance, federal Medicare or Medi-Cal — to a new state-run plan called CalCare.

The idea is to cover everybody and cut health care costs by eliminating insurance company overhead and profits — and forcing reductions in provider fees and drug prices.

But it would require by far the largest state tax increase in history, estimated at $163 billion. The tax hike would need to be approved by voters.

Even some Democrats on the Assembly Health Committee were skeptical of the plan — cognizant of the reality that many voters are satisfied with their current coverage and are increasingly leery of politicians and their policymaking. State government also doesn't have a stellar track record in all its ventures.

Under legislative rules, the bill will die unless the Assembly sends it to the Senate by Jan. 31. So, as a courtesy to the Democratic author, enough party colleagues voted for the measure to move it to the Appropriations Committee. It's an old legislative custom.

"I will cast a reluctant 'yes' vote," Democratic Assemblywoman Cecilia Aguiar-Curry of Winters told other committee members. "But I will cast a 'no' vote on the [Assembly] floor."

"I passionately reject the argument that if one doesn't believe this is the way to reform our broken [health care] systems that you support the status quo," she said, calling such assertions an "intellectually lazy argument."

"I will vote 'yes' today but reserve the right to vote 'no' on the floor," he said.

The concept is called "single payer" because only one entity would pay for health care — in this case, state government. There'd be no premiums, copays or deductibles. Just big tax hits. The state would also need to persuade Washington to turn over to Sacramento all the Medicare and Medi-Cal money the feds currently spend in California.

One major criticism of committee members was that the proposal doesn't really include a funding mechanism. There's a tax hike proposal, Assembly Constitutional Amendment 11 by Kalra, but it's on the shelf and not moving.

It's an election year, after all, and legislators will be running in newly drawn districts. Few are comfortable supporting a tax increase that would be a red flag for voters.

The plan is to pass the policy bill this year and secure federal approval of the Medicare and Medicaid (Medi-Cal) fund transfers. Then next year tackle the tax boost, which would require a two-thirds legislative vote to place it on the 2024 ballot.

This strikes some lawmakers as a less-than-honest way to legislate, even though the single-payer bill couldn't take effect until the tax hike did.

"If we pass this without a funding mechanism, we will be making a mockery of the [legislative] process," Assemblywoman Autumn Burke (D-Marina del Rey) told the committee.

"We are doing exactly what the people don't trust about this system."

She's chairwoman of the Assembly Revenue and Taxation Committee, which would need to approve the tax increase.

Newsom sidestepped an opportunity on Monday to embrace the single-payer proposal when he unveiled his $286-billion state budget proposal for the fiscal year starting July 1.

He campaigned for governor as a single-payer supporter in 2018 but slowly backed off before even being elected.

"I'm going to push the envelope, lean on this and see how far we can take it," Newsom told me just before the election, wisely making no promise.

Asked by reporters Monday whether he still supports single payer, the governor replied: "I've long believed it's inevitable in this nation," adding that it's "the ideal system."

"Meantime," he said, "I'm doing what I said I was going to do, and that's advance the cause of universal health care."

He has been doing that incrementally — the latest step by extending Medi-Cal coverage to undocumented immigrants ages 26 to 50. Those younger and older than those ages already are covered, largely because of Newsom.

Newsom noted that a commission he appointed has been drawing up universal health care recommendations and intends to present them to him in two months.

But he is already claiming that under his proposal "our state will be the first to achieve universal access to health care coverage."

The best bet is that Newsom's plan passes and the Democrats' bill eventually dies.