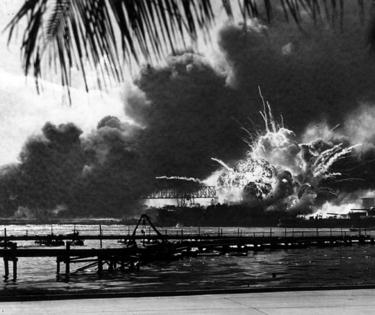 For many years as I was growing up, my mother’s companion was a man named Bob Kulicke. He was 16 when Pearl Harbor was bombed 80 years ago, on Dec. 7, 1941, and he and his buddies were disappointed to be too young to join up. They were sure that this war would be over by the time they could.

No such luck. On his 18th birthday he got a telegram from Uncle Sam that began “Greetings.” Three years later he came home, after fighting five campaigns against the Japanese in the Pacific. Among them were New Guinea and Ie Shima, a small island off the coast of Okinawa. He manned twin .50-caliber machine guns, defending airstrips and ammo dumps.

Bob was a painter of some note, and this fascinated many people, but I was more interested in the tales he told of World War II. And he told them with relish. He’d barely escaped with his life. Even then, in the 1970s, he preferred cloudy afternoons because the Japanese “won’t strafe us today.”

But one of my fondest memories of Bob is not of a story he told, but of a movie we watched together: “Tora! Tora! Tora!” This was in the middle of the night, in Brooklyn, on a color television that was so old it showed everything in various shades of blue. No matter. I was enthralled.

“Tora! Tora! Tora!” came out in 1970 and told, in epic scale from both the Japanese and American points of view, the story of the planning and execution of the bombing of Pearl Harbor. It was one of the last Hollywood blockbusters from the studio era and was a passion project of Darryl F. Zanuck, the legendary 20th Century Fox chairman who some suspected was slipping into dementia when the film was made. It pretty much flopped at the box office.

Of course, I didn’t know that when I was 13. I was fascinated by the planes, the ships and all the stuff blowing up. But something else: As I watched the film that night with Bob, I realized we were both rooting for … the Japanese.

It is only since I’ve grown into adulthood that I’ve come to realize what a remarkable movie this was, even if cineastes scoff. It and Hollywood helped bring Japan and the United States closer together when fresh memories of the war still scarred both nations’ psyches.

Impaired or not, Zanuck and his producer, Elmo Williams, had a bold idea that seems all the more amazing as the decades go by, and as the world remains a violent and dangerous place. All the Japanese sequences were made by Japanese filmmakers, with Japanese crews and casts. Japanese screenwriters wrote the script. Advisors included Minoru Genda, an architect of the actual attack. One of the eventual directors had trained as a kamikaze pilot.

Thus, just 25 years after Dec. 7, 1941, former combatants joined forces to tell the story of how it all began. Imagine if all once-warring nations did the same?

Until that point, most portrayals of the Japanese in World War II films were stereotypical at best, and often downright racist. They were shown as evil, duplicitous and often incompetent. Not in “Tora.” Here they were professional military men, highly skilled, wrestling with the violence they were about to unleash — on our country and, eventually, on their own. The pilots were dashing and brave. They flew those planes with remarkable elan. Bob, for one, said the flying in the film — which is extraordinary — was true to life. Perhaps a bit too much so.

Lots of old-time moviemaking went into the film. A life-sized Japanese battleship was built out of wood on a beach in Kyushu. More than 70 actual planes were used. Hangars in Pearl Harbor that survived the attack were blown to bits for the film. This was all long before CGI.

But the production was plagued with disasters and eventually went well over budget. Zanuck and Williams initially hired Akira Kurosawa, the most famous Japanese director then and still, at least to Western audiences, but then fired him when he behaved bizarrely on the set. Two pilots were killed.

The logistics of creating this hydra-headed cinematic beast in the pre-internet era, with multiple locations in Japan, Hawaii, Washington and Hollywood, proved daunting; delays were rampant, as were communication breakdowns. Footage had to be flown across the Pacific strapped to seats on Japan Airlines.

Is it a great film? No. The long windup to the attack can seem tiresome if you are not, like me, fascinated by Pearl Harbor and the forces and events that led up to it. The Japanese sequences are much better done than the American ones — even though the American director was Richard Fleischer, a highly respected filmmaker known for crisp action, epic set pieces and fast-moving plots. The American scenes have a stilted, wooden quality, with characters standing around awkwardly and spouting exposition at one another.

And yet … the film still fascinates me. And it’s not just the battleships and airplanes.

Japan’s attack on Pearl Harbor was among the most calamitous mistakes a modern nation has ever made. The militarists in charge of the government drove the country to ruin. “Tora” doesn’t try to sugarcoat that; indeed, it’s a Japanese character — Adm. Isoroku Yamamoto, played with understated elegance by the actor Soh Yamamura — who vocalizes the scale of this error.

“Tora” looks great today on Blu-ray, a revelation compared with that long-ago, all-blue television. The wooden battleship, which doesn’t look wooden at all, is especially impressive on screen. Perhaps I’ll revisit the film this week and have a toast to Bob. Or maybe it would be more fitting to watch it some cloudy afternoon.