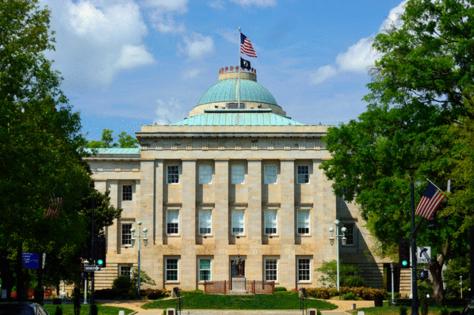 North Carolina’s state legislators are a pretty busy bunch, but they don’t get paid a whole lot. Very few working people can actually afford to run for office — and as a result, their interests are often left out of the policymaking process.

At just $13,951 per year, North Carolina’s legislative salaries are among the lowest in the country. That figure hasn’t budged since 1995, even as the demands of the job — the time commitment, in particular — have grown. This year’s legislative session, which began in January, was the second-longest uninterrupted annual session since at least 1965, The Associated Press reported.

North Carolina has a hybrid legislature, which means it falls somewhere between full time and part time. According to the National Conference of State Legislatures, members of a hybrid legislature spend more than two-thirds of a full-time job being legislators.

The increasingly tedious legislative calendar has caused at least one member of the General Assembly to decide not to run for reelection. Rep. Brian Turner, a Democrat from Buncombe County, announced last week that he would not seek a fifth term in the North Carolina House.

“During my tenure I have seen our legislative session lengthen to the point where session in October, November, and December (well past our planned adjournment at the end of June) has become the norm,” Turner said in a statement on his website. “This is unsustainable.”

For those who live several hours away from the state capital, the cost of housing while in session can add up too. Members do receive a daily stipend of $104 while the legislature is in session, but that hardly covers the cost of rent or a hotel stay these days. For years, some legislators, including Turner, have chosen to camp at the state fairgrounds.

There’s a reason so many members of the General Assembly are high-ranking lawyers or business owners, work in real estate or are independently wealthy. There aren’t many jobs that allow someone to spend the overwhelming majority of their time doing something else entirely — and a legislative paycheck alone is hardly enough for one person, let alone a family, to live off of. County commissioners and city council members across the state typically earn low salaries, too, despite the time commitment.

“It selects for certain kinds of people, and those are people with money and flexibility,” Cooper said.

A single mother who has to work to put food on the table? Forget it — $14,000 won’t cover food, housing and child care. Even someone with a spouse who earns an average income might struggle to make ends meet, especially if they have children.

“I couldn’t afford to do this job if my husband were not employed,” Rep. Susan Fisher, an Asheville Democrat, told the News & Observer earlier this year. “We’re stretching the money that we make to the absolute nth degree.” Fisher and several other lawmakers have turned to campaign money to supplement the cost of lodging in Raleigh this year.

For the average working person, holding public office is largely out of the question — and in many ways, our policies are a reflection of that. North Carolina is notoriously business-friendly, but it’s ranked dead last in the U.S. for wages and worker protections. The new state budget will eliminate the corporate tax rate entirely by 2029, forcing working people to bear a disproportionate amount of the tax burden.

Of course, the questionable optics of giving yourself a raise could be why their pay has remained unchanged for so long. But someone has to. California, for example, has a commission known as the California Citizens Compensation Commission, which meets annually to review the salaries and benefits the state pays its elected officials.

“I think there needs to be some third-party mechanism where somebody can look at this and say, ‘Hey, it’s time. It’s time for a raise,’” Cooper said. ”We’ve got to be able to put some breaks on the session length, and we need to have a sustainable model for salary moving forward.”

If we want our state legislators to look more like the people they serve, we have to make it possible for them to run without sacrificing their livelihood entirely.