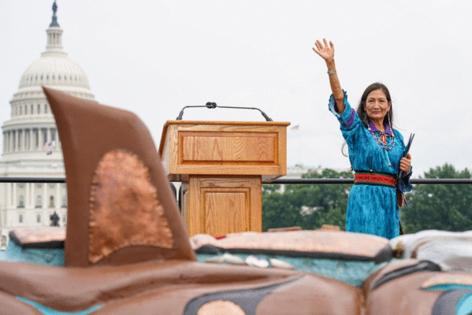 The U.S. Secretary of the Interior, Deb Haaland, is setting out to remove the word “squaw” from the names of all federal lands. On Nov. 19, she issued an executive order declaring that word to be derogatory and created a task force to find replacement names for geographic features on federal lands bearing the term.

The task force will have a big job. According to the statement Haaland’s office released announcing this action, more than 650 federal land units bear that term.

All of this reminds me of when President Barack Obama signed legislation known as Rosa’s Law in 2010. This law removed the derogatory terms “mental retardation” and “mentally retarded” from federal laws and policies and replaced them with “individual with an intellectual disability” and “intellectual disability.”

Before Rosa’s Law, there were institutions known as Intermediate Care Facilities for Individuals with Mental Retardation. These were basically large, oppressive nursing homes that warehoused and isolated people with intellectual disabilities from the general community.

Today, they function largely the same, except that now, because of Rosa’s Law, they are known as Intermediate Care Facilities for Individuals with Intellectual Disabilities.

It’s lipstick on a pig. A lot of disability activists have been pushing hard for years for a shift to a more community-based approach to serving and supporting people with intellectual disabilities in smaller, more integrated settings that give that person more autonomy and agency.

The American Association of Intellectual and Developmental Disabilities has a position statement that says, “It is essential to close institutions and at the same time create and support our existing communities to develop the capacity to support all people with (developmental disabilities) in their communities through individualized supports.”

Yet there are still intermediate care facilities in every state, and antiquated federal funding policy fuels their proliferation. States can use Medicaid funds to pay the cost. And Medicaid policy prohibits states from creating waiting lists for people to enter these facilities.

But states can and do create waiting lists for people who prefer living in community settings, making hundreds of thousands of people with intellectual disabilities wait for years for that opportunity. They may have no choice but to spend that time waiting in an ICF/IID, because that’s all Medicaid will pay for.

Rosa’s Law passed unanimously through the House and Senate, but there has been nothing resembling such a consensus in Congress when it comes to making genuine changes in policies that trap people in intermediate care facilities because community alternatives are funded so poorly.

I’m not saying that changing language isn’t important. Of course it is. Derogatory terms provide the dehumanizing cover that helps rationalize mistreating those who are different. Changing language is a step forward, but it’s only a step. Actions are what really count.

Mike Ervin is a writer and disability rights activist living in Chicago. This column was produced for The Progressive magazine and distributed by Tribune News Service.