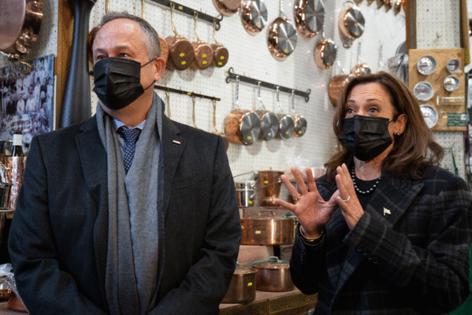 Visiting France is always perilous for politicians, given how easily populist American buffoons can take potshots at that epicurean nation, still an all-purpose symbol for snobbish elitism. Vice President Kamala Harris found that out to her cost in Paris just before Thanksgiving.

Taking a break from trying to repair troubled relations with France after the Biden administration joined the United Kingdom in a defense pact with Australia, Harris popped into a classy cookware store near the Louvre Museum. Reportedly, she dropped about $600 on a copper serving dish and frying pan.

Quel scandale! Republicans seized on the purchase as evidence that Harris is out of touch with ordinary Americans.

The attack, frankly, was both cheap and absurd for any number of reasons, not the least of which is that you can spend that kind of dough easily on high-end cookware on Michigan Avenue in Chicago. And we don’t recall the GOP Twitter account making all these comparisons with “ordinary Americans” when Melania Trump was out shopping, or Donald Trump was off playing golf, costing taxpayers plenty in Secret Service protection.

Harris is entitled to buy her frying pan with her own money, just as all presidents deserve protection even when they play golf. The real story here is that Republicans smell blood in the water when it comes to Harris, who has been rocking an approval rating barely reaching 40% of late, according to the analytical website FiveThirtyEight.

Defenders of Harris point to stories like the cookware uproar as evidence of sexism, racism or some combination of the two. They also argue that her boss, President Joe Biden, has assigned her to Sisyphean tasks, such as the immigration issue roiling America’s borders, a problem so confounding and polarizing (even within the Democratic Party) that it inevitably tarnishes anyone unlucky enough to get involved.

They have a point, but the harsh reality is that many Americans find Harris unimpressive so far.

She is seen as disengaged, absent and in over her head, an image that first appeared when she was on the campaign trail.

Vice presidents, say Harris supporters, are supposed to be seen but not heard much of the time, with the exception of supporting their bosses. Biden was famously loyal to Barack Obama. And Mike Pence smartly decided to say nothing about some of Trump’s most egregious blather.

That said, the world only spins forward and the situation with the vice presidency arguably is very different right now. At 79, Biden is of an age when legitimate questions are being posed about the viability of a second term and who his successor as the Democratic nominee should be, in the event of his not running. Americans need to feel confident about the woman who could be asked to take over at any moment. Plus, with the omicron variant of the coronavirus roiling the globe this week, the pandemic not only remains acute but shows little signs of ending anytime soon.

All administrations must function on multiple levels. Biden’s crew, though, has so much going on that more reasonably can be asked of the vice president. Harris is not exactly rising to that occasion.

We say her future is in her own hands. As it should be.

Whining about the difficulty of the immigration (or any other) assignment is going nowhere for Team Harris. Vice president is a high office and, given the focus required by the pandemic, charging her with finding a solution to that crucial issue is a legitimate decision made by her boss. If she can solve that one, or at least find a path forward that will improve the current disaster, she will be able to bat away the growing interest in her presidential rival Pete Buttigieg, currently gaining valuable experience as chief of a Department of Transportation flush with federal recovery money and charged with remaking much of America’s infrastructure.

Harris has plenty of time left to prove herself, but her position as vice president should not be an automatic path to the Democratic nomination. And even if you look beyond the gossipy sniping from rival staffers in different West Wing offices, it’s clear that Harris has to improve her performance in office. She will need achievements to which she can point, and so far, we don’t see anything major on that list.

CNN reported that Harris has often said she feels constrained as to what she can do politically.

Politically? Forget that. The salient question is what can she do for the good of the American people.

Heaven knows, there is work to be done: on the response to omicron; on immigration; on ensuring the huge dispensing of federal recovery funds gets to the right projects; on the climate crisis; on the crime wave threatening American cities.

Plenty for a vice president with ambitions beyond that office to do. That’s as clear as a shiny copper pot.