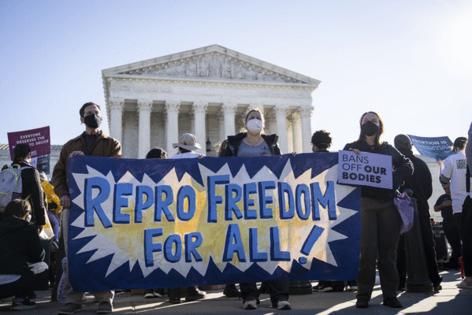 Today, all but one of those landmark rulings are accepted and undisputed precedents. Only the right to an abortion, established by a Supreme Court ruling in Roe vs. Wade in 1973, has fueled intense resistance.

Still, the Supreme Court has steadfastly upheld the right to abortion over the last half-century. That hasn’t stopped states from shamelessly devising laws to get around abortion rights. Now, Mississippi state officials are asking the justices not just to allow a blatantly unconstitutional 15-week abortion ban to go into effect in their state but also to overturn Roe vs. Wade. Oral arguments in the case, Dobbs vs. Jackson Women’s Health Organization, are scheduled for Wednesday.

If Roe is overturned, it would be left to the states to set their own laws. While some states such as California and New York will protect access to abortion, many others have abortion bans on the books ready to go. To put control over abortion access completely in the hands of capricious, politically motivated state legislators would be a devastating blow to women and their ability to control their own bodies.

Access to abortion has been hobbled even under Roe, but a swath of states banning it outright is a step back from modernity that, frankly, a decade ago would have seemed unthinkable. The addition of three conservative justices during the Trump administration has encouraged states like Mississippi to pass blatantly unconstitutional bans on abortion in the hope that the Supreme Court would hear their appeals. Now, for the first time in nearly three decades, the court is hearing a challenge to Roe.

But even with a Supreme Court that includes six conservative justices, there is no reason to throw out a precedent the court has stood by, no matter what personal beliefs on abortion the individual justices hold. When the court has changed its mind in the past, usually it has been in order to expand a person’s rights, not take them away.

In Roe vs. Wade, the court held that the due process clause of the 14th Amendment guaranteed a woman the right to choose to have an abortion up to the third trimester, which is roughly the point of viability of the fetus outside her body. In Planned Parenthood of Southeastern Pennsylvania vs. Casey, in 1992, the court revisited its decision in Roe and upheld it, ruling that states could not pass laws that placed an “undue burden” on a woman seeking an abortion. The court’s reaffirmation of Roe was full-throated: “The woman’s right to terminate her pregnancy before viability is the most central principle of Roe v. Wade. It is a rule of law and a component of liberty we cannot renounce.”

“Casey is precedent on top of precedent,” the Center for Reproductive Rights attorneys argue in the brief filed on behalf of their client, Jackson Women’s Health Organization, Mississippi’s sole licensed abortion clinic.

The court seemed to agree with that view and would continue to defend abortion rights over the years. In 2016, the justices struck down a Texas law that required abortion providers to have hospital admitting privileges and abortion clinics to be equipped like ambulatory surgical centers, finding the requirements unnecessary and unduly burdensome. Four years later, in June Medical Services vs. Russo, the last abortion case that Justice Ruth Bader Ginsburg would vote on, the court threw out a Louisiana law identical to the Texas one.

Opponents of the Roe decision argue that there is no explicit right to abortion in the U.S. Constitution. Of course there isn’t. But the14th Amendment guarantees a right to a broad range of personal liberties. Some are yet to be defined, according to the court in the Casey decision.

Further, the justices made clear in the Casey ruling that the 14th Amendment gave people the liberty to marry and have families as they saw fit, to use contraception and access abortion — something that women, for the two decades between the Roe and Casey decisions, had relied upon as they built their lives.

Now two generations “have come to depend on the availability of legal abortion,” the Center for Reproductive Rights argues in its brief in the Mississippi case. “And the right to make this decision has been further cemented as critical to gender equality.”

Indeed, a group of 154 economists and researchers wrote in an amicus brief filed for the abortion provider that recent studies show “abortion access ushered in by Roe reduced teen motherhood by 34% and teen marriage by 20%.” For women who had unintended pregnancies, access to abortion “has increased the probability that they attend college and enter professional occupations.”

Mississippi officials say the controversy over a woman’s right to have an abortion created by the Roe and Casey decisions has “damaged the democratic process, poisoned our national discourse, plagued the law —and, in so doing, harmed this Court.”

That’s absurd. That sentence could have been uttered by outraged segregationists intent on subverting the 1954 decision to desegregate public schools in Brown vs. Board of Education. Roe and Casey are hardly convoluted rulings. They are workable and straightforward. It’s state legislatures that have tried in more than a thousand ways (just count up the state restrictions over the decades) to stifle access to abortion. The burdensome state restrictions masquerading as protections of women’s health, the scientifically discredited claims about early fetal pain that state lawmakers have used to justify early abortion bans, the outrageous Texas law that incentivizes citizens to sue people who help a woman get an abortion — these are the things that have poisoned the national discourse.

In the case being heard this week, the court will decide whether pre-viability prohibitions on abortions — such as Mississippi’s 15-week ban — are unconstitutional. Under Roe, they all are. The one thing Roe has guaranteed is an abortion up to the point of viability. Take that away and a state could ban abortion at, say, three weeks of gestation — a point when almost no woman knows she is pregnant.

If that happens — and it could — women in half the country will have to travel to another state to get an abortion, no matter the cost, obtain abortion medication pills surreptitiously or risk a dangerous do-it-yourself abortion. Handing power to state legislatures to set the rules for abortion is the equivalent of returning to a day when gay and interracial couples were not allowed to marry in certain states.

That would be terrible for the nation and for the health and safety of American women. The Supreme Court should do the right thing and uphold Roe once again.

Here come the one-year retrospectives of Joe Biden’s presidency as the anniversary arrives this week. Here are some guidelines for assessing them, beyond the obvious advice to be wary of partisans who would praise or pan...Read More

As the warmth of the holiday season ebbs, Americans are taking a cold look at their Christmas gifts. Many don't like what they see.

One in 4 Americans expects to return at least one holiday gift by next weekend, according...Read More

Marilyn Mosby is many things to many people. Baltimore’s state’s attorney has been a rising political star. She is smart, energetic, progressive, reform-minded and the source of some pride within the city’s Black ...Read More

As the nuclear negotiations between the world powers and Iran approach a denouement, the Biden administration is turning up the heat on … Donald Trump!? Facing a Republican clamor against reviving the 2015 deal, the ...Read More

On Jan. 7, the U.S. Supreme Court heard sound evidence why the federal government should be allowed to require employers of more than 100 to order workers to get vaccinated against COVID-19 or wear masks and take weekly ...Read More