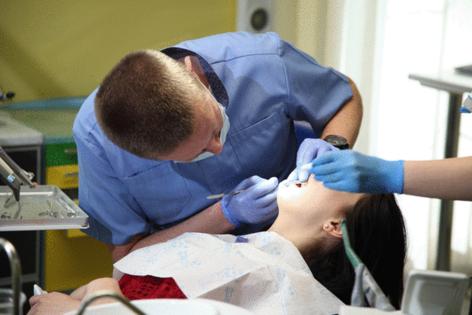 When parents warn their children about drug exposure, they tell them tales of the danger of peer pressure from teenagers in murky basements or from the dark corners of the bleachers during a high school football game. Coming-of-age movies portray swimming pools full of teens drinking alcohol and smoking marijuana while the protagonist dodges bad influences like a spy weaving through radioactive laser beams. The reality for many American teenagers, however, doesn’t align with popular narratives. First-time drug use often begins somewhere far more fluorescent: the dentist’s chair.

Getting one’s wisdom teeth removed is a rite of passage for teenagers, right up there with getting a driver’s license or going to prom. When I was 17, on the same day I received my first college acceptance, I was in a chair having my impacted third molars removed. My experience wasn’t particularly groundbreaking; nearly 3.5 million people get their wisdom teeth extracted each year. Unfortunately, what is also not remarkable, is that after the procedure I was handed a prescription for an opioid, a type of drug involved in the deaths of nearly 50,000 people per year.

In 2017, the United States Department of Health and Human Services declared a public health emergency in an effort to address the national opioid crisis, which has only worsened during the pandemic with opioid overdose deaths increasing 37% in 2020 compared with 2019. Also last year, Purdue Pharma pleaded guilty in a federal court to counts of fraud and kickback conspiracies after providing illegal incentives to physicians to increase opioid prescribing. It was a small step toward accountability and a warning for dentists to examine their own practices.

Dentists are the sixth-highest prescribers of opioids in the United States and the highest prescribers of opioids to patients between the ages of 10 and 19 years old — the age group at the highest risk of developing opioid use disorder. A study completed at the University of Michigan reported that hundreds of young people ages 13 to 30 (1.3% of 56,686 patients) who filled an opioid prescription after a wisdom tooth extraction went on to engage in “persistent opioid use” in the following year, even after the window for pain relief had closed — more than 10 times the number of people who did not fill an opioid prescription after such a procedure.

Patients trust the medical professionals in their lives to make evidence-based decisions for them. However, the facts have consistently shown that ibuprofen, naproxen and other nonsteroidal anti-inflammatory drugs (NSAIDs) are equally, or more, effective in the treatment of acute dental pain than any opioid. Although the American Dental Association does recommend the use of NSAIDs as a first-line of treatment for dental pain, the ADA has failed to provide clinical practice guidelines on treating dental pain. It’s long past time they do so.

We shouldn’t live in a world where we have to question whether our health care provider’s prescriptions are in our best interest. We need to make sure that adolescents who get their wisdom teeth out are not unnecessarily exposed to a dangerously addictive drug, and that begins with refusing opioids for dental procedures — and holding dentists accountable for poor prescribing practices.

The last thing California needs is a new barrier to clean energy production. Yet the state Public Utilities Commission is poised to add one at the behest of private companies that see rooftop solar as a threat to future ...Read More

No sane American is eager for a hot war between the United States and its allies and Russia over a potentially imminent invasion of Ukraine by Vladimir Putin’s forces. Yet even as President Joe Biden talks up the ...Read More

The American Museum of Natural History, a wonderful institution founded in pursuit of science and truth, has been fulfilling a lifesaving mission for the past nine months, administering COVID-19 vaccines seven days a week....Read More

The Knight Foundation and Ipsos have a new survey on Americans’ views about free speech, and for those of us who consider spirited and even wrongheaded debate crucial to democracy, there’s both good news and bad.

America still had the naïve ability to be shocked back on Nov. 16, 1973, when a rambling then-President Richard Nixon stood up before 400 Associated Press journalists. Wallowing in the Watergate scandal, the 37th ...Read More