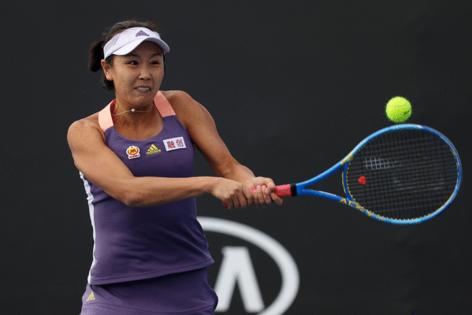 Chinese tennis player Peng Shuai reacts during a tennis match in Beijing on Oct. 6, 2009. When Peng disappeared from public view this month after accusing a senior Chinese politician of sexual assault, it caused an international uproar. But back in China, Peng is just one of several people, activists and accusers alike, who have been hustled out of view, charged with crimes or trolled and silenced online for speaking out about the harassment, violence and discrimination women face every day.

#WhereisPengShuai? has become the hashtag of the moment. The fate of one woman, Chinese tennis star Peng Shuai, has drawn more global attention to Beijing’s abysmal human rights record than the repression of a million Uyghurs.

The reason goes beyond the compelling #MeToo drama of a Chinese sports star willing to do the unthinkable, by publicly accusing a former senior Communist Party leader of sexual assault. After she posted her allegation on Chinese social media, this three-time Olympian completely disappeared for three weeks, her post and name scrubbed from China’s state-monitored internet as if she had ceased to exist.

Peng Shuai might have vanished with little fanfare if not for the forthright stand by the Women’s Tennis Association (WTA), despite the risk of huge financial repercussions if the WTA is blocked from touring inside China. Global tennis stars such as Serena Williams and Naomi Osaka, have joined the chief executive of WTA Tour, Steve Simon, in demanding proof of Peng’s safety and an investigation of her charges.

This stands in stark contrast to the cowardice of the president of The International Olympic Committee (IOC), Thomas Bach, who gave Beijing a pass after Chinese media released what looks like a hostage video of Peng surrounded by officials. Bach is apparently afraid the scandal will fuel calls for a boycott of the Beijing Winter Olympics in February.

Yet the fate of Peng has become a challenge not only to the Olympics, but to the backbone of companies and sports leagues dealing with the world’s fastest rising power. China wants to control what the world can and can’t say about its behavior. #WhereisPengShuai? has become a litmus test for #CanChinaControlTheWorld’sFreeSpeech?

Of course, the first issue is how to rescue Peng Shuai from the wrath of Chinese officials.

“It is the first time that a top leader in China is accused of sexual assault,” says Teng Biao, a prominent Chinese human rights lawyer who is now a visiting professor at the University of Chicago. Peng’s charge was launched against former Chinese vice premier Zhang Gaoli, who was also one of seven standing members of the Communist Party’s Politburo. “Nobody dares accuse such a high-ranking official,” Teng told me.

So it is not surprising Beijing wanted to “disappear” Peng. “The first step is to intimidate her, then silence her, and possibly confess [that her charges were false] on television,” says lawyer Teng.

He knows whereof he speaks.

Years ago, Teng defended cases involving freedom of expression, the death penalty, Tibetans, and Uyghurs in China before he was driven into exile, as Beijing crushed human rights lawyers. He tells me “I myself was kidnapped and ‘disappeared’ three times. I was physically tortured and they threatened to send me to prison for 10 years and intimidated my family members.”

“I believe the Chinese government has put Peng Shuai under extreme pressure. She must be cooperative. She can’t talk about her experience.”

Yet when IOC president Bach was permitted a half-hour video call with Peng, he accepted her claim that she was “safe and well” and invited her to lunch during the Olympics.

“This is clearly the IOC saying we’re going to play by Beijing’s rules, even if it flies in the face of Olympic ideals and common decency,” says Sophie Richardson, Human Rights Watch’s China director. ”The IOC, which should be helping Peng Shuai, is helping her abusers.”

Shame on the IOC and Bach!

Yet to the surprise of Chinese officials, the demand to know #WhereIsPengShuai? can’t be disappeared as easily as she could.

The World Tennis Association won’t let up. And unless she is quickly freed from censorship, and permitted to travel — and unless her charges are addressed — this will and should impact the Olympics.

It was bad enough to give the Olympics to a country that is involved in such massive human rights violations, against Uyghurs, Tibetans, the Hong Kong pro-democracy movement, and ordinary Chinese people. Add Peng’s disappearance, and at minimum a diplomatic boycott of the games is called for — which President Joe Biden is considering. No matter what role Beijing forces Peng to play in coming weeks. (might Chinese leaders trot her out like a totem at the Olympics and force her to make a canned speech?) there must be a response.

However, the Peng Shuai moment should have repercussions beyond the Olympics.

The WTA’s courage puts to shame other major companies or movie studios or sports organizations that have groveled after being chastised by Beijing. Who can forget when the NBA and some of the NBA’s top stars slammed Houston Rockets general manager Daryl Morey’s tweet in support of Hong Kong pro-democracy demonstrators? They caved to financial fear of a Chinese boycott of the NBA games and broadcasts.

Beijing’s growing power has convinced its leaders that it can disappear or discipline its critics at home — and abroad — with no repercussions. This applies to companies or countries. (Example: When Australia asked for an investigation of COVID-19′s origins, Beijing cut off their agricultural exports.)

The more organizations and countries that kowtow, the more that will be demanded. Peng Shuai’s plight reminds the world that there will be no end to such demands unless there is global pushback. Freeing Peng Shuai is only the first step.