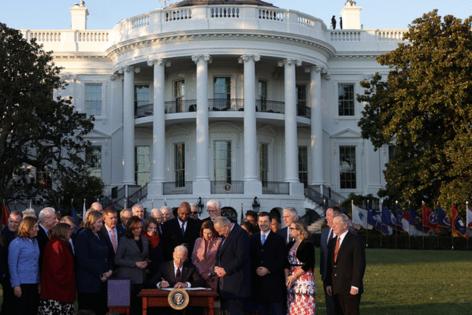 It is common to hear children singing “Over the River and Through the Wood” this week. The lyrics of the song are based on a Thanksgiving poem by Lydia Maria Child originally published in 1844 titled “The New-England Boy’s Song about Thanksgiving Day.” The poet was reminiscing about visiting her grandfather’s house as a child and traveling by horse-drawn sleigh. The song has me thinking of both Thanksgiving and the bipartisan infrastructure bill.

Take a few minutes to think about how connected Thanksgiving and infrastructure really are. If you are traveling for the holiday, then you rely on the safety of roads, highways, bridges, rails and airports. If you plan on drinking water or rinsing vegetables at grandma’s, you hope the drinking water infrastructure is delivering clean and healthy water, free of lead. You trust that the energy grid will deliver gas or electricity to heat your oven to cook the turkey or bake a pumpkin pie. It seems like everyone is now aware of how important our ports are to the supply chain. And if you can’t make it home for the holiday, then you hope you have broadband to have a Zoom call with family or friends.

The infrastructure bill has broad support. In a recent Morning Consult-Politico poll, 56% of registered-voter respondents said they approve of the bill, including 27% who strongly support it. Only 27% either somewhat or strongly oppose it, and 17% were unsure. Not only do voters support the bill, so does the American Society of Civil Engineers, which hails the bill on its website: “The United States has taken a major step forward in improving the nation’s critical infrastructure.”

The society also completes a quadrennial infrastructure report card for the nation as a whole and for each state individually. Members give the nation’s infrastructure a grade of C-minus. Missouri also received a C-minus on its report card. The civil engineers state on their website: “The 2018 Report Card for Missouri’s Infrastructure is designed to translate our expertise into a guide to help our fellow citizens understand the state of our infrastructure. The Report Card provides a snapshot for residents and policymakers to engage in conversation about where we are and where we need to be for the continued economic success of the state.”

There were only two congressional votes favoring the bill from the Show-Me State — Republican Sen. Roy Blunt and Rep. Emanuel Cleaver, a Kansas City Democrat. All the other members voted no. Democratic Rep. Cori Bush joined a coalition of five other progressives who vowed to oppose the bill as a way to hold leverage for the Build Back Better social spending package.

Bush seemingly cut off her nose to spite her face in not delivering needed infrastructure to her St. Louis constituents. Republican Rep. Ann Wagner of Ballwin also voted against the bill. As usual, Wagner’s office didn’t respond to a request for comment. Wagner said on the conservative “Marc Cox Morning Show Podcast” that the infrastructure bill is “nothing more than a Trojan horse for a socialist agenda.”

My mind has trouble making the leap from upgrading our highways, bridges and water pipes to a socialist agenda.

One of the problems with our hyperpolarized political state is when elected officials vote with their eye toward having only their side of the agenda win, the citizens who they represent end up losing.

Republican President Dwight D. Eisenhower could be considered the granddaddy of infrastructure. Eisenhower signed the Federal Aid Highway Act of 1956, popularly known as the National Interstate and Defense Highways Act. Eisenhower saw the vision of the interstate highway system and worked to find bipartisan support for a very important part of the nation’s infrastructure.

Eisenhower stated at the time: “Together, the united forces of our communication and transportation systems are dynamic elements in the very name we bear — United States. Without them, we would be a mere alliance of many separate parts.” Perhaps heading into Thanksgiving, we should think of infrastructure as Eisenhower did, something that can connect and unite us.

This Thanksgiving, after my family travels over the river and through the woods to my children’s grandparents' house, I will offer my thanks for our nation’s infrastructure, the passing of the bipartisan bill, and for those members of Congress who voted for it.