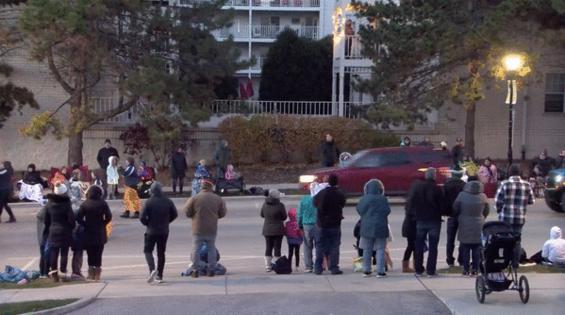 In a country inured to all manner of American horror stories, the events Sunday night in the Milwaukee suburb of Waukesha still had a capacity to shock.

Even in a normal year, this quiet town’s pre-Thanksgiving holiday parade would have been the kind of event that forms the bedrock of safe, quiet, family-oriented communities.

People lined the streets to watch high school bands, dance troops showcasing the town’s youngest residents, even the Dancing Grannies, a troop dedicated to the notion that you are never too old to shake a leg and breathe festive life into your community. The beverage of choice was hot chocolate, the preferred accessory was pompoms, and viewers assembled in lawn chairs they’d carted downtown from home.

But this year, of course, was not the same as the years that had gone before. The Christmas parade in Waukesha had been canceled in 2020 and the 2021 edition was intended to be restorative, to help folks recover from the pandemic and give their kids something at least close to a normal holiday season.

Maybe paradegoers would have spent a dollar or two in this newly struggling downtown, helping out local businesses, but it surely was more important to everyone that local kids had a good time. Some of those tiniest dancers had been staring down a pandemic for a good chunk of their lives.

With all that in mind the parade’s organizers had come up with an ideal theme: “Comfort and Joy.”

Into all of this seasonal Americana came a weaponized red SUV, allegedly driven by someone who had no prior record of dispensing comfort and joy but plenty of instances of causing the opposite. On this evening, in an act surely no one could have anticipated, this suspect turned one of the highlights of the year in Waukesha into a killing field.

Instead of calling out their kids’ names in delight as they high-stepped their way along Main Street, panicked parents went running to see if those kids were alive and well, only to find that, in many cases, they were not.

This happened just a couple of hours away from Chicago, in a town chosen by Americans of all stripes as a safe and decent place to raise a family. Somewhere you could protect your kids from harm.

The national media crews that had spent weeks covering the Kyle Rittenhouse trial in Kenosha, just an hour’s drive away, essentially had to turn back around for another story of violence and mayhem in a place that had wished for neither. And since these events offer up fuel for social media channels and hungry online outlets, hot-takes abounded when surely none of them were needed.

If there was ever an event that spoke for itself, this was that horror. There was nothing to add.

Often, photographers seek out images that juxtapose violence and innocence, as if we don’t all know by now that anyone’s world can come crashing down in the flicker of a moment. In Waukesha, those pictures were everywhere. People had spilled their hot chocolate on the asphalt, running for their kids in panic.

Some will express justifiable horror at what appears to be yet another instance of the criminal justice system become so overwhelmed and dysfunctional that it was not able to protect Americans from a bad actor repeating his crimes while out on bond. But all of the facts are not yet in on that particular matter.

And as justified as that criticism may turn out to be, it’s also worth noting that no government official could have reasonably expected anyone to do something like this, just as no law enforcement officer could have been expected to protect the parade from such a heinous act.

Dancing Grannies? “Comfort and Joy”? A Milwaukee bedroom community? Who, even in this riven country with its tacit but hardly victimless civil war, could reasonably have thought any of this a target for a killer on wheels?

For many people, there will be a yet-stronger sense from this incident that the country has gone off the rails, that something is terribly wrong, that our mutual inhumanity is starting to make life close to unbearable.

And who could argue with that point of view?

At this writing, we feel only sympathy for the bereft and traumatized families of our neighboring state, a place of restoration and repose for so many Chicagoans. We know that those who have losses here also have to prepare for a Thanksgiving, and many future Thanksgivings, that will bring so much sorrow. We wish we could change all of this for them, but we cannot.

At the very least, as we gather around our tables Thursday, we can spare a thought for those who cannot do so, and for whom the holiday season that follows will bring neither comfort nor joy.

Perhaps we might decide that we all, as a country, can do much better than the events that have unfolded these last few days in Wisconsin.

Our leaders should offer up that charge.