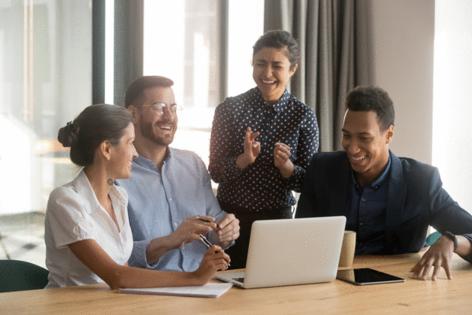 Is there a gender-based promotion gap? Are there too many women who do well on the job, but are not considered seriously for career advancement?

Some new supporting evidence has come to light. A recent study using a database of almost 30,000 management-track employees at a large retail chain found that the women received higher job-performance ratings, but lower ratings for “potential.” Those same women were also promoted less, although they ended up performing better than their male counterparts. Perhaps most significantly, almost half of the promotion gap correlated with the lower ratings of “potential.”

Bias isn’t the only possible explanation. The study’s conclusions can be challenged on the basis of the size of the effect, or in its interpretation. The researchers calculated, for instance, that a woman’s chance of being promoted in a given year was between 1% and 2% less than the chance of a man being promoted. Is that a difference so small it might be random, or the result of measurement error? Or does it accumulate over time and put qualified women at a significant disadvantage?

That debate will continue, but we know that people make judgments by stereotypes, and that there are many more male chief executives than female CEOs. Similar disparities hold at many leadership levels, though they tend to be most extreme at the very top, as they were at the unnamed North American company scrutinized by the study. The resulting stereotypes can make us worse at allocating jobs to the most talented people.

Maybe the men, on average, did have greater ambition and thus promotion potential. One reason could be that women, on average, spend more time at home raising children than men. For very demanding executive jobs, even a small difference in time and travel availability could make a big difference in job performance.

And yet even if that’s the case, there could still be a discrimination problem. Even if women and men differ on average, there is a probability distribution for each group, and those distributions usually will overlap. That is, there will be many women who are willing and able to meet any workplace standard thrown at them, and many men with limited ambition.

If you think men and women are different on average, the unfairness can become all the more severe for the potential top performers. In this context, employers will look at the most talented women and, for reasons of stereotyping, dramatically underestimate their potential, including for leadership positions.

Economic reasoning suggests another subtle effect at play. Promotion to the top involves a series of steps along a career ladder, often many steps. If there is a discrimination “tax” at each step, even if only a small one, those taxes can produce a discouraging effect. It resembles the old problem of the medieval river that has too many tolls on it, levied by too many independent principalities. The net effect can be to make the river too costly to traverse, even if each prince is taking only a small amount.

One striking feature in our current arrangements, as pointed out in a comment by a reader named Zaua on my “Marginal Revolution” blog post, is that there are few truly objective performance metrics used for evaluating performance at work.

In most jobs, it is hard to find a number that accurately measures an employee’s overall contribution to the profitability of his or her company. The subjective judgments of supervisors thus carry great weight. That’s in contrast to schools, which assign grades, class rank and tests and employ many more methods for assessing performance.

At the university level, female students have more than achieved parity with their male counterparts. In the workplace, the same cannot be said, even in jobs closely related to the subject areas where women are doing better in school.

One conclusion might be that schools are doing American women a disservice by emphasizing task completion (“homework”) and under-emphasizing skills of leadership and ambition.

Yet the workplace is partly at fault as well, and we can see this by a broader look at the economy. One common piece of advice is that talented women should consider clustering in fields where performance evaluation is objective. In real estate, for instance, a sale is a sale and the commission is reaped accordingly, no matter what the prejudices of the boss. It is indeed the case that women are represented disproportionately in this field, and with great success.

Some evidence suggests that female fund managers do better than male fund managers in another kind of work where performance can be measured with some degree of objectivity. But running a hedge fund often requires somebody’s personal judgment that somebody else is promotable or worth funding.

Workplace discrimination has been a feature of virtually all of world history, so nobody should be shocked by evidence that it continues today.