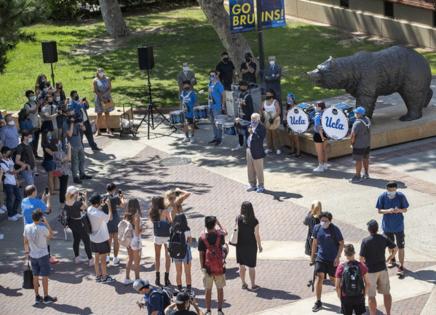 During and after the recession of 2007 through 2009, college enrollment grew rapidly. That was partly just millennial-generation demographics: there were 3.5 million more 18- through 24-year-olds in the U.S. in 2010 than a decade earlier (and about 750,000 more than there are now). But the percentage of young Americans attending college and graduate school also hit an all-time high in 2011.

The brief-but-sharp 2020 recession and its aftermath are already shaping up a lot differently for college enrollment. Census Bureau data released last week, included in the above chart, shows a modest 0.7 percentage-point overall enrollment decline from the previous year as of October 2020 — albeit with an interesting divergence between men (down 1.5 points) and women (down 0.2).

Meanwhile, the word from colleges themselves is that the enrollment declines have continued in 2021, with two-year colleges seeing by far the biggest drop. Spring 2021 higher education enrollment was down by 603,000 students, or 3.5%, from the year before, according to the National Student Clearinghouse Research Center. Two-year colleges accounted for most of that with a decline of 476,000, or 9.5%, most of which was among 18- to 24-year-olds. Preliminary fall numbers show continued if slowing declines for two-year schools and a possibly bigger drop than earlier this year for four-year schools.

The declines also aren’t evenly distributed among four-year colleges, with commuter schools reporting enrollment drops while the numbers grew at more elite schools. The Indiana University system, which has a flagship campus in Bloomington, an urban campus shared with Purdue University in Indianapolis and regional campuses in Gary, Kokomo, New Albany, Richmond and South Bend, has some of the best and timeliest data (already updated through fall) on these diverging fortunes.

Indiana University also has enrollment statistics by age, and the breakdown for its regional campuses is intriguing.

Enrollment declines earlier in the decade were entirely among older students, and a big part of the explanation seems to have been that Indiana’s unemployment rate fell from 9.1% in early 2011 to 3.1% at the end of 2019. “At our campus and similar regional campuses, it looks like every one-percentage-point change in the unemployment rate leads to a 5% change in enrollment,” IU Northwest economics professor Micah Pollak told me in 2019. Now the state unemployment rate is 4.1%, but for one group in particular — the group with by far the biggest enrollment decline this fall — the job picture is better than it has been in decades.

The unemployment rate for teenagers is the lowest it’s been since the 1950s. Granted, the share of teenagers with jobs is also much lower than it was then (32.1% in September versus near 50% in the early 1950s), but unlike every other age group in the U.S., teens have already seen their employment-population ratio rate fully recover from pandemic declines.

Teenagers have much less reason to be fearful of COVID-19 than older workers, and also much less reason to be fed up with their pre-pandemic employment experiences given that most didn’t have any. Meanwhile, employers struggling to lure back experienced workers are more willing than they’ve been in a long time to hire straight out of high school, sometimes offering $20-plus hourly wages and attractive benefits.

So … is that good news or bad? It’s obviously tough for those toiling in the less-glamorous precincts of higher education, who were already bracing for demographically driven enrollment declines in the latter half of the decade but are now getting hit with them five years early.

The picture is more mixed for would-be students. Two-year institutions tend to have higher percentages of students of color and from disadvantaged backgrounds than other colleges, so there’s the risk that the enrollment declines will simply entrench existing inequities. There’s also evidence that delaying college has in the past resulted in lower earnings over the long run.

This time around, though, lots of companies are offering to help pay for college as an enticement for would-be workers, which should make it easier for young adults to keep their options open. College tuition is also rising at a rate lower than overall inflation for the first time since the early 1980s, reducing the costs of delay. And if today’s worker shortages help more employers figure out that being biased against hiring non-college graduates is costing them money, the economic cost of forgoing college could fall.

That’s a big if, of course, but it’s still important to remember why college enrollment rose so much a decade ago. The job market was historically awful, especially for young people. Unemployment rates for teenagers and 20- to 24-year-olds were the highest since the Bureau of Labor Statistics started keeping track in 1948 (for ages 25 through 54, unemployment rates were about the same as in the early-1980s recession). The unavailability of jobs may have pushed many young people into consuming too much college, especially considering the burden of college debt.

In the 2020 recession, unemployment broke records for all age groups but eased much more quickly. Young people on the fence between college and work now face far more attractive choices than they did in the early 2010s. Choice is good, right?

Bob Dole was among the best of a generation of Americans who believed this country had both the ability and obligation to do great things at home and abroad.

The former Republican senator from Kansas and three-time ...Read More

“The Beatles: Get Back” documentary, which is my pick for best movie of the year, showcases an underappreciated aspect of Paul McCartney: He’s more than just an artistic genius — he’s one of the greatest ...Read More

My career with the National Park Service started in 1976 with a gig as a seasonal backcountry ranger at Yosemite National Park, one of the busiest parks in the country. That year, we welcomed around 2.7 million visitors. ...Read More

The availability of COVID-19 vaccines earlier this year allowed for the partial reboot of life as usual during the pandemic. But the omicron variant — and its delta predecessor — have come along to remind us that COVID...Read More

Life in prison should be reserved for the worst of the worst — murderers, chronic violent offenders and those who commit the most serious sex crimes. But Florida condemns people to life sentences for far lesser crimes ...Read More

What does it mean to serve your country? Army Col. Edward Shames, the last remaining member of World War II’s “Band of Brothers,” certainly answered that question. He died last week at age 99.

According to his ...Read More