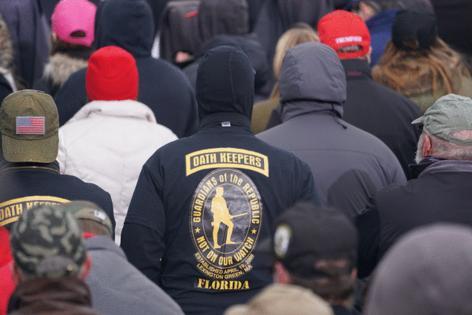 North Carolina Republicans tried to distance themselves from the type of radical extremism that led to the storming of the U.S. Capitol on Jan. 6. But a leaked membership roster reveals that at least two state lawmakers are affiliated with the Oath Keepers, a right-wing militant group whose members are among those charged in connection to the Capitol insurrection.

North Carolina Reps. Mike Clampitt, a Republican from Bryson City, and Keith Kidwell, a Republican from coastal Beaufort County, are both listed as members of the group, according to ProPublica. Clampitt was elected to the state legislature for one term in 2016 and then again in 2020. Kidwell has served since 2019, and is the House deputy majority whip. Clampitt and Kidwell joined the Oath Keepers in 2014 and 2012, respectively, ProPublica’s analysis showed.

That information should concern every North Carolinian. The Oath Keepers are one of the country’s largest anti-government extremist groups, whose self-described mission is to defend the Constitution. In practice, that looks like armed standoffs with authorities and, of course, participating in storming the U.S. Capitol. The organization is a threat, and that’s not just our opinion; it’s the FBI’s, which has described the Oath Keepers as a “large but loosely organized collection of militia who believe that the federal government has been co-opted by a shadowy conspiracy that is trying to strip American citizens of their rights.”

Anyone who identifies as an Oath Keeper or member of any anti-government paramilitary group has no place in elected office. So why aren’t Republicans coming out and saying so?

The revelation that state lawmakers would belong to such a group is alarming, if not entirely surprising. Some Republicans in the state legislature have previously shown a willingness to rub elbows with the far right — such as when Kidwell and other legislators met with the North Carolina Sons of Confederate Veterans in 2019, for example — but for lawmakers to be members of these groups themselves is additionally concerning.

Kidwell also serves as chairman of the newly reorganized House Freedom Caucus, which has propagated theories of voter fraud in the 2020 election. During the 2021-22 session, Kidwell has introduced legislation such as a bill to allow concealed carry by elected officials at the legislature, a bill to allow certain faculty and school staff to carry weapons on school grounds and a bill called the “Second Amendment Preservation Act.”

Clampitt stands by his Oath Keepers affiliation, according to ProPublica. Clampitt appears to be a Confederate sympathizer who has previously supported legislation to repeal the portion of the state’s constitution that prohibits secession.

Kidwell did not comment on the inclusion of his name on the roster, but said he doesn’t think the information should be in the public domain, according to an article published jointly by Raw Story and Triad City Beat. Kidwell, Clampitt and House Speaker Tim Moore did not immediately respond to a request for comment for this editorial.

The Oath Keeper revelations are one piece of a larger, more worrisome trend. In addition to Clampitt and Kidwell, ProPublica’s analysis identified 46 other state and local government officials on the Oath Keepers roster. Far-right groups aren’t just on the fringes of politics anymore. Slowly but surely, they’re making their way to the mainstream, emboldened by politicians who give legitimacy to their conspiracies whether they belong to these groups or not.

It’s hard for Republicans to distance themselves from the Capitol rioters when members of their own party belong to a militant group — and when their baseless claims about election fraud helped incite the riots in the first place. Both Kidwell and Clampitt have said they don’t condone violence, but those are empty words when they’ve aligned themselves with a vigilante group that thinks violence is the path to justice.

This is a tipping point for North Carolina Republicans, who have, for the most part, avoided the level of election fraud conspiracy we’ve seen in states like Arizona and Pennsylvania. But that’s changing notably with Madison Cawthorn, and having two North Carolina lawmakers belong to Oath Keepers without so much as a “that’s not who we are” statement from leadership is exactly the kind of normalization that should alarm North Carolinians. There’s a fine line between party loyalty and complicity. Republicans need to decide which side of it they want to be on.