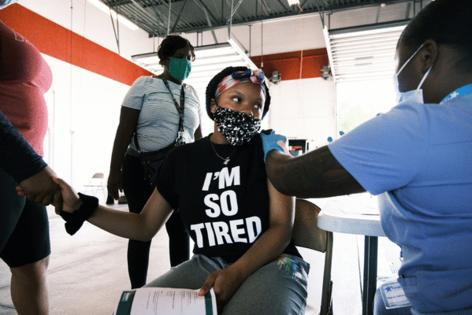 The White House announced Wednesday that it is ready to roll out COVID-19 vaccines for children ages 5 to 11 if the Food and Drug Administration approves Pfizer’s application for emergency use in early November.

The Biden administration said it has bought enough doses for all 28 million children in that age group and will work with state and local leaders to make the vaccine available at more than 25,000 pediatricians’ offices as well as hospitals, schools, pharmacies and community health centers.

Once the FDA gives its approval, California parents should move quickly to protect young children from the coronavirus.

The vaccines previously given the OK by the FDA are safe and protect people from a virus that has killed 71,000 Californians and 728,000 Americans.

In late September the FDA began studying data collected in a trial that included more than 2,000 children. Pfizer officials said children were given two smaller doses of the vaccine than those given to those 12 and older. Pfizer reported that the smaller doses produced antibody responses that were comparable to those seen in a study of people 16 to 25 who received full doses. Pfizer also said that the study showed similar side effects to those seen in adults, such as arm soreness and fatigue.

Failure to vaccinate young children not only puts them at risk, but also places everyone they come in contact with at greater risk, including classmates, relatives or friends of classmates, some of whom may not be able to be vaccinated for medical reasons.

Children are less likely to become severely ill from COVID-19. But more than a quarter of the reported weekly COVID cases in the United States in the last month came from children under the age of 18. The American Academy of Pediatrics said that nearly 6 million Americans younger than 18 have been infected with the coronavirus. The New York Times reports that the delta variant put nearly 30,000 children in hospitals in August. And 125 children ages 5 to 11 in the United States have died from COVID-19.

The FDA in May expanded emergency use authorization for the Pfizer COVID-19 vaccine for children ages 12-15. The agency gave full approval of vaccines for everyone 16 and older in late September.

The sooner the vaccines receive full approval for all school age children, the better. Gov. Gavin Newsom recently announced a statewide vaccination mandate for California students and school staff members. But the governor said they would not have to be vaccinated until the school term after the vaccines have full approval from the FDA for students grades 7-12 and K-6. Unless vaccine makers get the OK for those two groups by Jan. 1, that means the mandate may not be be required to be vaccinated until at least the fall of 2022.

Newsom should mandate that staff members be vaccinated by no later than Jan. 1. And he should give students no more than two months to be vaccinated after the FDA gives its full approval of the vaccines for children.

It’s the best way possible to help rid the Bay Area and California of a pandemic that has devastated the state for nearly two years.