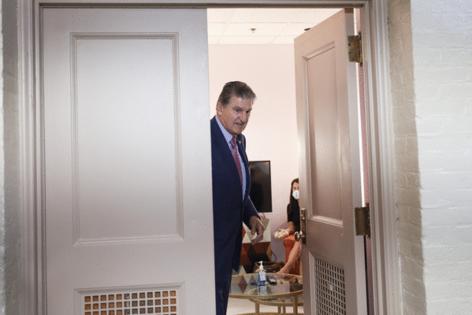 Sen. Joe Manchin of West Virginia set the political world ablaze this week with the news — swiftly denied, it should be said — that he’s considering leaving the Democratic Party.

To repeat, he denies it, in no uncertain terms. But the reality is that any Democrat representing a state Donald Trump won by almost 39 percentage points in 2020, and who’s at odds with his party’s base on several different fronts, has to have given at least some consideration to leaving the party. In truth, Manchin should take a good hard look at it.

There are lots of Americans who are neither hard-core conservatives nor committed progressives. But the moderate wing of the GOP faded long ago, and despite President Joe Biden’s clear roots in the moderate side of the Democratic Party, he’s pushing a strikingly ambitious and transformative policy agenda that goes far beyond bland platitudes about “uniting the country.”

That said, the best reason for Manchin not to bolt the Democrats is that it would be pointless.

Manchin could shift the balance of power in the Senate by defecting to the GOP, but he is clearly not a Republican — he voted against Obamacare repeal, against the Trump tax cuts, for the American Rescue Plan and wants to raise taxes on the rich. He could do what his colleague Angus King does and put a little “I” instead of a “D” next to his name, and still caucus with the Democrats, but that wouldn’t change anything.

Manchin could make it worthwhile, however, if he found a partner.

By far the most natural one is Sen. Lisa Murkowski of Alaska, who’s been so at odds with the Republican Party over the years that she actually lost the Republican primary in 2010. She secured re-election as a write-in candidate, benefiting from the votes of many rank-and-file Democrats.

She and her allies then got Alaska’s election system changed to a complicated top-four runoff system designed to allow her to beat right-wing candidates by relying on Democratic votes. This works in part because Alaska has an unusual (for the U.S.) tradition of multiparty politics. Right now the lower house of the state legislature is controlled by a “coalition caucus” made up of 15 Democrats, four independents and two dissident Republicans.

If Manchin and Murkowski were to team up, the Senate would be split 49-49-2 rather than 50-50. They could use their control over the balance of power as leverage to control committee chairmanships and dictate what comes to the floor.

Such a centrist caucus might also be appealing to similarly mismatched senators like Jon Tester of Montana, a Democrat, and Republicans Susan Collins of Maine and Mitt Romney of Utah. In the House there are members such as Republican Liz Cheney of Wyoming and Democrat Jared Golden of Maine who are awkwardly situated in the current party configurations.

Conventional wisdom is that in the U.S., third-party efforts are doomed by the first-past-the-post voting system. There’s even a name for this idea, “Duverger’s Law.” But you only need to look as far as Canada to find robust multiparty systems coexisting with first-past-the-post electoral systems. Third parties have mostly been unnecessary in the U.S. because its relatively open primary system gives people with new ideas a path to power within the parties. But the Republican Party’s increasing cult-like devotion to Trump, and the growing policy ambitions of Democrats, have opened up a space that several politicians and many voters clearly fit into. And today’s Congress is evenly divided enough that a small centrist caucus could wield enormous influence.

The current centrist caucus doesn’t have much influence because moderates from both parties tend to hang back and edit their co-partisans’ ideas rather than seize control of the agenda. And that’s probably what Manchin will continue to do. But the country could use a more aggressive and ambitious form of moderation, and Manchin is ideally positioned to lead that charge. He’d just need a partner.

Matthew Yglesias is a columnist for Bloomberg Opinion.