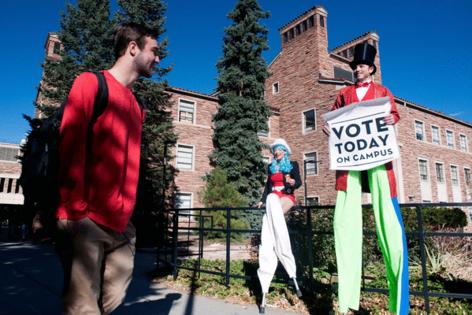 In the average lifetime there are a handful of major transitions during which an individual can reinvent themselves and their place in society. These are moments that stay with us forever, like moving to a new city, starting a new job, or joining the military. Or voting for the first time.

Reams of social science have demonstrated humans' powerful commitments to our identities. In any given situation, we ask ourselves, "What does someone like me do?" and then decide accordingly how we act, dress and, increasingly, how we engage with our democracy.

That's why the long-term health of our country depends on our ability to foster democratic participation as a core tenet of our population's identity. To do that, we need to create successful "civic transitions" for every American. Once someone has voted for the first time, they tend to adopt an identity as a voter, and then vote again in subsequent elections. Getting young people to adopt voter identities by inviting them to participate in our democratic processes can create a lifetime of civic engagement.

In 2020, multiple student-serving organizations came together to help young people incorporate civic participation into their lives during a time of profound identity transition: enrolling in college. Through an initiative called Ask Every Student, they set out to increase college student voter registration by attempting to reach each individual student on nearly 200 participating campuses. An open-source framework enabled leaders to incorporate voter education and outreach into universal programs like student orientations and core curriculum courses. Campuses included private and public institutions, community colleges and minority-serving institutions such as historically Black colleges and universities.

An extensive study into the initiative's efficacy points to one clear conclusion: Just a few minutes of direct interaction has the power to profoundly impact a person's civic identity — especially when that person is new to the democratic process.

In all, approximately 76.1 percent of students surveyed reported hearing about an AES program on their campus. Assuming a similar percentage holds true for the nearly 3 million total students enrolled in colleges that participated in AES, we estimate that millions of students were reached through this initiative and that tens of thousands of them registered to vote in part because of it.

Of course, registering to vote and voting are not the only acts of democratic engagement that matter. Community service, activism, dialogue across differences, and many other facets make up the full spectrum of a vibrant civic life. But by introducing college students to the bedrock functions of the democratic process we open the door for them to positively impact their communities in multiple ways.

One of the study's most exciting takeaways was the degree to which students shared information they learned from an AES program on their campus with their families. In our conversations with students at these campuses -- we held 24 focus groups across the 14 study campuses — students noted how they shared AES program information with their families, spreading the initiative's impact.

Most Americans will experience some kind of major life transition in the next decade. These times of transition, especially for young people, are an opportunity to shape their civic identity for the better — but only if we commit to reaching them where they are.

American democracy is experiencing its own transition moment, challenged by increasing partisan polarization, decreased confidence in public institutions, and increased incidents of anti-democratic attitudes and behaviors. Against this backdrop, applying the lessons of Ask Every Student at scale will foster participation and positive identities as voters, as well as strengthen our democracy.

Melissa Michelson is the dean of arts and sciences and a political science professor at Menlo College. Carmen Liñero-Lopez is the Ask Every Student program manager at the Students Learn Students Vote Coalition.

In hearing the guilty verdicts of those who murdered Ahmaud Arbery, I felt a sense of relief that justice was done in a case where the evidence was so clear that the defendants were guilty. Yet that reaction, which I am ...Read More

Chicago journalist Ben Joravsky called me a “son of Chicago,” and I am. Inside and out. A love for this city is part of my heritage. My father, Mike Royko, served as a voice for Chicagoans through his newspaper column ...Read More

At least we’re learning. Remember when the early reaction to the outbreak of a deadly virus in Wuhan was to discourage people from changing their travel plans?

While Senate confirmation hearings often get heated, it’s rare these days to see legislators out-and-out accuse administration nominees of being secret Communists. In fact, it’s been more than 60 years since that sort ...Read More

When parents warn their children about drug exposure, they tell them tales of the danger of peer pressure from teenagers in murky basements or from the dark corners of the bleachers during a high school football game. ...Read More