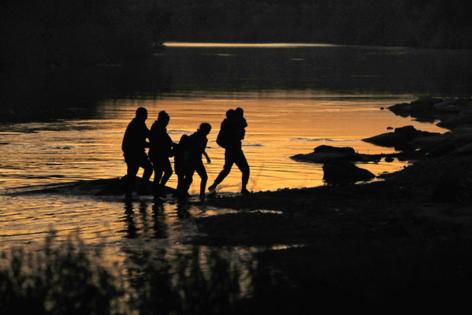 Now, Democrats have a chance to be immigrants’ champions. But nine months into the Biden administration, with control of both chambers of Congress, they have yet to protect millions of undocumented people who helped the nation survive the pandemic by harvesting our food, cleaning our hospitals and more.

President Joe Biden promised to “aggressively advocate for legislation that creates a clear road map to legal status and citizenship” for 11 million, acknowledging them as an “essential” part of his “Build Back Better” plan. But his sweeping bill, the U.S. Citizenship Act of 2021, went nowhere.

Since then, Democrats have twice tried to unilaterally add legalization to a huge social spending bill using a streamlined process known as budget reconciliation, which requires a simple majority vote. But Senate parliamentarian Elizabeth MacDonough, an unelected referee, rejected both attempts — deeming that the policy consequences outweigh the budget impacts. Democrats can disregard her nonbinding advice. They can even replace a parliamentarian, as Republicans have done.

Instead, Democrats are mulling over a third proposal for her review that would only grant immigrants parole — the right to remain temporarily in the country — rather than green cards, which would provide stability and freedom to cross borders. The parole plan would prolong limbo and second-class status for immigrants who have built their lives in this country.

“It’s just complicity at this point,” Marcelo Hernandez Castillo, author of “Children of the Land,” a memoir about growing up in fear of deportation, said of the Democrats’ lackluster performance. “It is not conferring validity to people’s presence. It’s continuing to relegate them to the margins.”

A new Global Strategic Council survey shows that 90% of Democrats and 75% of independents would be “upset” if Democrats fail to pass a path-to-citizenship proposal.

Some Democrats in the House aren’t giving up. Reps. Jesús “Chuy” García of Illinois, Lou Correa of California, and Adriano Espaillat of New York have said they will vote down any budget reconciliation deal on the multitrillion-dollar infrastructure package that does not include “common-sense immigration reform.”

They called on Vice President Kamala Harris to disregard the parliamentarian’s advice while presiding over the Senate. That move would be subject to appeal. Ultimately, the outcome would depend on how many Democrats have the courage to stand up for immigrants.

Correa told me he won’t accept anything short of a pathway to citizenship. He opposes parole, which allows people to be “held hostage” like the Dreamers, whose temporary protections came under attack by Trump. “We’re tired of being political piñatas,” Correa said. He said he’s frustrated with Democrats’ apparent lack of urgency after 35 years of inaction for immigrants. “Why is it that we’re always second or third priority?” he asked.

Espaillat agreed. “It’s now or never,” he told me. But unlike Correa, he said he’d consider temporary parole. García, meanwhile, told me that parole is “a last resort” and that it’s still possible to secure a pathway to citizenship.

California Sen. Alex Padilla, a Democrat, has been the chief advocate for a pathway to citizenship for essential workers, Dreamers and temporary protected status holders. He says they’ve earned green cards — classified as “essential” during the pandemic. Now, he says, “we have to treat them as essential.”

On whether he would reject a reconciliation deal that lacks green cards, he told me: “There are a number of options, and in my opinion, all of those options are still on the table.”

Other advocates argue that the Congressional Hispanic Caucus, chaired by Rep. Raul Ruiz, D-Calif., should be more aggressive, even linking arms with García, Correa and Espaillat on an ultimatum. Ruiz hasn’t made that commitment but said in a statement: “We are exploring every option available.”

Pablo Alvarado, co-executive director of the National Day Laborer Organizing Network, fears Democrats plan to hide behind the parliamentarian to distract from weak political will. “That’s the way they pass the buck,” he told me. But he’s hoping the Hispanic Caucus will stiffen its resolve.

Pushing hard for immigration reform is both the right thing and the politically strategic thing to do.

If Democrats don’t deliver for immigrants, they could face a crisis of Latino turnout in the midterm. The Latino vote has become crucial in swing counties and helped save California Gov. Gavin Newsom from a recent recall election. Latinos are not monolithic, but more than 80% support legalization for the undocumented.

Nothing would energize Latino voters more than a pathway to citizenship for the undocumented. The majority of Latino U.S. citizens live in households with noncitizens. Failing to deliver on this promise would depress turnout and allow Trump to pick up Latino voters by appealing to distrust and disillusionment.

“The Democratic Party has to do something with immigration that will be a major change, where people will actually see the difference,” said José Palma, coordinator of the Massachusetts TPS Committee and an activist from El Salvador.

Palma recalls door-knocking in 2016 for Hillary Clinton in New Hampshire. Many Latinos told him they were skeptical. President Obama had won in 2008 with the slogan “Yes we can,” echoing “Sí se puede,” the mantra of Dolores Huerta, the Latina labor leader. Latinos had shown up to vote for him in historic numbers. But then Obama deported a record 3 million people.

By pandering to xenophobia, Obama reinforced the criminalization of immigration in the American imagination, fueled the GOP’s nativist hysteria and left Latinos feeling betrayed.

If Democrats fail again to act boldly and instead cater to race-baiting, they’ve already lost. We can never nail the coffin on Trumpism without being willing to fight for immigrants. Cowardice will pave the way for a Trump comeback.