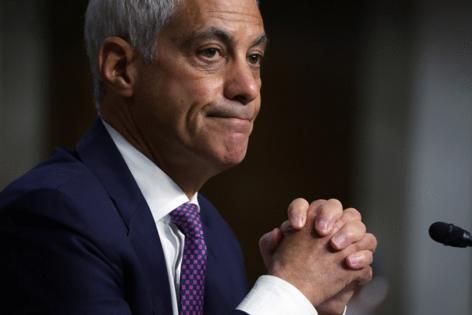 The “Saturday Night Live” sketch writes itself: Rahm Emanuel, the famously profane and blunt former mayor of knuckle-tough Chicago, charged with running U.S. diplomacy in the nation where politeness and decorum matters more than anywhere else in the world.

The people of Japan bow to show respect; Emanuel screams on the phone or hangs up on those who displease him. Euphemism and nuance are central to Japanese communication; stories about Emanuel include him stabbing a steak knife into a table to evoke the fate of disloyal politicians and screaming a profane admonition at British Prime Minister Tony Blair. Reportedly, Emanuel had “mellowed out” by the time he left the Obama White House and returned to run Chicago, beginning in 2011.

The ensuing eight years at City Hall were marked by many things, including economic growth and neighborhood development, but mellow would not be the descriptor that first comes to mind. Ask anyone who worked for him.

All that said, we still say confirm the 55th mayor of Chicago to the ambassadorship for which he was nominated by President Joe Biden.

Emanuel’s qualifications for a leadership position are self-evident. He is a former U.S. representative, a former chief of staff to Obama, whom he served loyally and effectively, and the former mayor of one of the biggest, and most difficult, cities in the world to run. He has a formidable intellect, decades of experience in the political arena and a famous ability to balance many things at once.

And though his pugnaciousness and ambition have always grabbed headlines, he is more sophisticated and thoughtful in person than those stereotypes.

Is he diplomatic? Not by the usual definition, but it is worth remembering that a U.S. ambassadorship is really about serving American interests abroad, ensuring nothing untoward happens in the military arena, building trade and educational partnerships and representing and protecting Americans abroad. He can handle all of that, especially if he draws on some of the resources available to him in Chicago.

Furthermore, it’s not exactly like the bar for an ambassadorship is high. During the Trump administration, the Senate confirmed people whose only palpable qualifications were a decent wardrobe, the ability to write large checks and support for a mendacious president. Compared with some of those amateurs, Emanuel is overqualified for the job.

The main objection from progressives in the Democratic Party to Emanuel’s confirmation, of course, revolves around the police murder of Laquan McDonald and the subsequent attempts by his administration to conceal video evidence to avoid the potential fallout of public exposure.

And, in a coincidence that Emanuel surely would have preferred to avoid, his confirmation hearing Wednesday took place on the seventh anniversary of McDonald’s death. Rep. Alexandria Ocasio-Cortez has called Biden’s nomination of Emanuel “deeply shameful.” And she is far from alone.

This newspaper has carefully reported at length on the central question here: What did Emanuel know, and when did he know it?

There were a number of coincidences implying, at the minimum, politically motivated delays and manipulations. Then-State’s Attorney Anita Alvarez had a long-delayed murder charge for Jason Van Dyke ready to go, just at the very moment Emanuel released the tape. Police reports penned by other officers were, to put it mildly, at variance with the evidence of the footage. A $5 million settlement was paid to McDonald’s family even before they filed suit, suggesting that Emanuel or someone close to him knew what was on that tape, long before the public was able to see the conduct of one of its sworn public servants.

Emanuel has always denied any cover-up and said that his administration was merely following police protocol when it came to the release of video from incidents under investigation.

Whether you feel all of this should bar Emanuel from further public service depends on how much you blame him for the conduct of the Chicago police, not just one officer but a culture designed to protect colleagues at the expense of bringing the truth to light. It also depends on to what degree you think the buck stopped with the mayor, even though he had no direct involvement in the incident.

Everyone should agree that the McDonald incident was a shameful episode in the history of Chicago policing, race relations and politics. Where there is room for disagreement is whether or not it should mean the end of Emanuel’s career. A confirmation hearing has to take the full measure of a person. And if the career is long, that likely will include serious mistakes. Like this one.

On balance, we think Emanuel deserves another chance to serve the American people. It is our hope that all of the above will make him a better public servant.

We note that it is likely Emanuel would have been named to a cabinet position in the Biden administration were it not for this matter. He would have been well qualified there, too, and his absence indicates a price that was paid. An ambassadorship hardly is the equivalent of secretary of transportation, even to the great nation of Japan.

Finally, we note that some Republicans are supporting Emanuel and we say that bipartisan support is a desirable thing at any confirmation hearing. And these days, it’s all too rare.

Let us trust the Japanese have much to teach an Ambassador Emanuel.