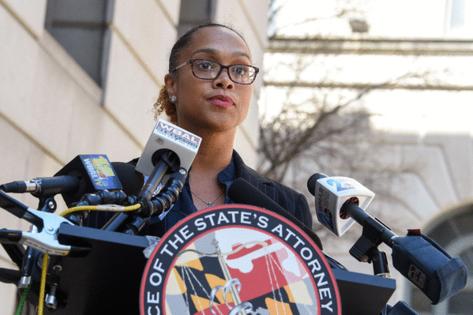 At one time, it was fashionable to advocate for zero tolerance policing on the grounds that cracking down on minor offenses prevents worse ones from happening. In more recent years, however, the adverse consequences of this approach — including high rates of incarceration of people of color and deep distrust of police in cities like Baltimore have become apparent. So when Baltimore State’s Attorney Marilyn Mosby announced in the early stages of the COVID-19 pandemic in March 2020 that her office was dismissing charges against people arrested for drug possession, prostitution, open containers and other relatively low-level infractions, it was a controversial call (albeit reinforced by the circumstances of the pandemic). Even more so when she later announced that this policy would be permanent and insisted that get-tough practices of the past that placed so many of Baltimore’s young Black men in the criminal justice system had been a contributing factor to increased violent crime.

Today, it appears she was at least half right as a new study from the Johns Hopkins Bloomberg School of Public Health found that the choice to stop prosecuting low-level offenses in Baltimore has resulted in no corresponding increase in crime. Indeed, the numbers are compelling. Of the 741 people who saw their charges dropped in 2020, just six have since been rearrested for violent crime. Six. And the researchers calculate the policy caused about 443 people, more than three-quarters of them Black, not to be arrested on drug or drug paraphernalia charges since then. Meanwhile, there was no increase in 911 calls in city neighborhoods reporting complaints related to drugs and prostitution. Perhaps residents thought such calls would do them no good given the policy change, but that kind of informed forbearance citywide seems unlikely.

In short, what the Hopkins study strongly suggests is, as Mosby predicted, mass arrests and incarcerations for low-level offenses are simply not a productive approach to fighting crime. Further, we would have to agree with the Hopkins researchers who observed that forcing young people into the criminal justice system can have an extremely harmful impact on them and their families. Not only do prisons do a terrible job at rehabilitating criminals, they can cause significant damage to the individual’s mental and physical health. And they are costly for taxpayers as well, both during and after incarceration. Why imprison someone when it does no good to all involved?

Yet we can only take one study — performed at Mosby’s request, incidentally — so far. It is also possible the peculiarities of the pandemic have skewed results. And the second half of the equation, that fewer arrests might ultimately make Baltimore safer aren’t supported by the current circumstances. Baltimore still appears on pace to match or exceed last year’s 335 homicides. And the state’s attorney has been dogged by controversies of her own including a federal criminal investigation into her finances and those of her husband, City Council President Nick Mosby. And there have been concerns raised about her side investments and her work-related travel and her distrust of city police including a whopping 305 names on a “do-not-call” to court because of integrity issues list that a state appeals court recently ruled can be disclosed to the public.

Baltimore is far from the only jurisdiction grappling with this fundamental question of when it is prudent to make an arrest for certain types of crimes and when is it not. Nearly one year ago, voters in the state of Oregon decriminalized possession of small amounts of almost all drugs, but it’s fair to suggest the jury is still out on the impact that choice is having. Closer to home, the Maryland General Assembly is expected to take up the subject of legalizing marijuana for recreational, and not simply medicinal, use in the upcoming session. If drug use is going to be treated as more of a public health challenge then as a public safety problem, greater investment in drug treatment and non-police intervention will have to be made. The war on drugs may be over, but the war on abuse, overdose and addiction is surely not.

Mosby deserves the opportunity to a crow a bit about the results in Baltimore so far. As the researchers noted, the findings are encouraging. It was not an easy decision, at least not politically, but it appears to have been the correct one.