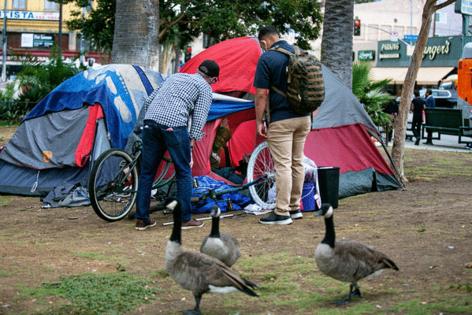 With homelessness the biggest issue in Los Angeles as a mayoral election season revs up, Councilman Joe Buscaino is pushing for a measure on the June 2022 ballot that would outlaw homeless people camping in public spaces. If the City Council approves, voters would see that measure on the same ballot that has Buscaino running for mayor.

This is no coincidence. Buscaino gets to run for mayor claiming he has a faster way to get people off the streets than his colleagues in City Hall ever did.

But his plan will not be faster, and we hope voters won’t get a chance to vote on it. The proposal has been sent to the council’s Rules Committee, and it should die there.

In his motion, Buscaino says the measure is about housing people, not citing them for being on the street. His proposal notes that everyone must be offered some kind of shelter bed or temporary housing before they can be cited or shooed off a sidewalk. But that’s already the case, because a 2018 federal appellate court decision prohibits the city from citing or jailing homeless people for camping outside if it does not have enough shelter to offer. Instead, Buscaino’s primary order of business appears to be enshrining in the municipal code a ban on camping on sidewalks, in parks and in other public places.

The measure would put the Office of Emergency Management in charge of supplying more temporary housing and would give the mayor power under an emergency declaration to fast-track and remove zoning restrictions on permitting of housing projects for the homeless.

L.A. Mayor Eric Garcetti already has fast-tracked permitting of such housing projects. And the city already has an ordinance that allows encampments to be dismantled if homeless people are first offered at least temporary housing. The ordinance was long debated in the council, and Buscaino ultimately voted for it. Under the ordinance, a council member must get council approval of specific encampments he or she wants cleared, and people must be offered housing first. Signs must be put up indicating that the area will be off-limits to camping.

Buscaino now says the street engagement process, required by the city, takes too long. How long does he think it’s going to take, under his measure, to find temporary housing and persuade homeless people everywhere in the city to accept it? (Buscaino has managed to get people from several encampments in his district into housing. But it didn’t happen overnight.)

What this measure would do is force the city to prioritize shelter or temporary housing over desperately needed permanent housing so that outreach workers can offer it to homeless individuals. If they decline, they can then be cited by police or shooed off that block. And it is implausible to think that banning camping in the city means there will ultimately be no one camping on sidewalks.

This measure is unnecessary, duplicative and dangerous. Buscaino wants voters to believe there is an easy solution to the proliferation of homeless encampments. If there were, everyone would be housed. The City Council should bury this idea. And Buscaino should leave it there.

In an era of statue toppling and building denaming, what should be made of the legacy of Father Junípero Serra, saint and architect of California’s mission history, which was replete with forced labor of the state’s ...Read More

It shouldn't have been surprising because Gov. Gavin Newsom's elitist attitude toward Mexican farm workers is emblematic of his privileged class. But unless one understands the nature of wealthy entitlement in California, ...Read More