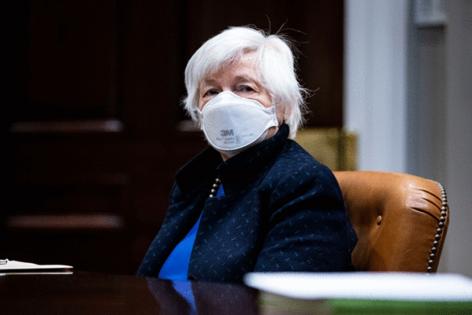 For all the nation's problems — resurgent COVID-19, tragic weather extremes and the economic tolls of both — you'd think political leaders wouldn't crash us into an easily avoidable crisis as well. Yet here we are, facing the catastrophic threat of defaulting on the federal debt.

It's a recurring political game, a favorite of Republicans. Treasury Secretary Janet Yellen says Congress must raise the nation's statutory borrowing limit by mid- to late October to meet the country's obligations. But with Democrats nominally in power in Washington, Republicans are refusing to vote for an increase, risking a default on the IOUs they helped pile up.

While the right blames the red ink on President Joe Biden's spending plans, more than a quarter of the $28.5-trillion federal debt is attributable to tax cuts and spending during Donald Trump's presidency, including initial rounds of pandemic relief. Republicans controlled the Senate for those four years, and the House for two. Trillions more date to George W. Bush's administration, when Republicans also ruled Congress for most of his two terms, and reflect the costs of deep tax cuts, two wars and a new Medicare drug entitlement.

Given the bipartisan responsibility for the debt, here's a bipartisan solution for avoiding these fights over the borrowing limit: Get rid of it.

That won't happen, not soon at least. Republicans, led by two of the least constructive, most cynical politicians I've covered over many years, Senate Minority Leader Mitch McConnell of Kentucky and House Minority Leader Kevin McCarthy of Bakersfield, are enjoying Democrats' discomfiture too much as they anticipate capturing control of Congress in the 2022 midterm elections.

But consider why the debt limit must go.

It's anachronistic. It's ineffective as an incentive for fiscal rectitude. And it's divisive, sparking so-called debates that mislead Americans about just what's at stake and further undermine their fragile faith in government. Instead, the nation's commitment to cover its debts should be plain, even explicit, in its annual spending laws, without a separate statute.

Few nations have debt-ceiling laws; Denmark, the only other democracy that does, sets its limit so high as to be irrelevant. International investors watch in wonder as the United States, the planet's financial powerhouse, whose dollar is the global reserve currency, repeatedly jeopardizes that status — and the global economy — by calling into question whether the government will make good on its debts. The harrowing crisis in 2011, provoked by tea party Republicans in Congress, caused credit-rating firm Standard & Poor's to downgrade the nation's AAA+ rating.

The debt ceiling, as we know it, dates to 1917. Until then, Congress had authorized the Treasury Department to borrow for specific purposes. From World War I on, as the United States became a global power, Congress set broader borrowing limits so the Treasury could better manage federal finances. As U.S. obligations grew, so did the frequency of votes to lift the debt limit.

Since 1960, according to the Treasury, Congress has acted 78 times to adjust the ceiling — 49 times under Republican presidents and 29 times under Democrats. But beginning in the Reagan era, as both the debt and political polarization grew, lawmakers often weaponized the debt-limit votes to make the party in power look profligate, and themselves fiscally righteous. Five times in the past decade Congress flirted with default by budget brinkmanship. Yet all three times that Congress lifted the ceiling during the Trump administration, Democrats provided support to make the actions bipartisan.

Lifting the debt limit isn't a green light to new spending, despite McConnell's repeated claims that Republicans are opposing an increase because of Democrats' "reckless taxing and spending spree." It simply allows the government to pay debt it's already incurred through spending and tax-cut laws, including obligations for Social Security and Medicare benefits, defense contracts, veterans' healthcare and much more.

The headline on an analysis Tuesday from Moody's Analytics said it all: "Playing a Dangerous Game With the Debt Limit."

Voting against a higher debt ceiling is like voting for a balanced-budget constitutional amendment, another Republican hobbyhorse: Neither does anything to resolve the imbalance between federal revenue and spending. Such gambits are like political bumper stickers, easier and more popular than proposing spending cuts and tax increases to actually reduce debt.

In the decades I reported on fiscal policy, from Ronald Reagan's second term on, annual federal spending much of that time was roughly equivalent to about 21% of the nation's gross domestic product, while taxes covered an amount in the range of 18%. That left yearly deficits of around 3% of GDP (more in years of economic crises, less in good times, and excepting the few years of surpluses late in Bill Clinton's presidency).

Given that experience from Reagan through Trump — an era of four Republican presidents and two Democrats, when control of Congress swung from one party to the other or was divided between them — it is past time to recognize that there is a rough consensus in this country to accept some deficit spending. That plain fact should settle how to handle the debt ceiling: Either unite to raise it whenever necessary, or abolish it.

The House took the first step Tuesday, voting to raise the limit enough to finance projected debt through December 2022 — just past the midterm elections. Democrats provided all 220 votes for this act of fiscal responsibility. McConnell, irresponsibly, reiterated his self-fulfilling vow that Republicans will block action in the Senate.

In these bouts of brinkmanship, Democrats are inevitably at a disadvantage. They believe in making government work. Republicans, formerly the small-government party, have become the anti-government party, recklessly so. When McConnell and McCarthy signal that they're willing to drive the country over a fiscal cliff, a la Thelma and Louise, believe them.

Grab the wheel. Avert the crash. End the debt limit.