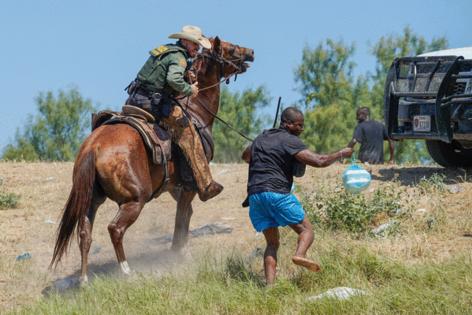 What’s your thinking, Mr. President, about the images of the border agent grabbing and menacing a Haitian migrant with what looks for all the world like a whip, a migrant who, like hundreds of others, seeks to enter this, ahem, land of the free; a hungry migrant who, if you look closely, is bringing food back to his encampment.

Not only are the Haitian migrant and his compatriots “yearning to breath free,” they are yearning to do so in the very country that bears so much culpability — though not all, of course — for the unending misery of the Haitian people in their homeland. The same misery to which you are too willing to deport them, using the same public-health excuse as your predecessor, the one who took Central America children away from their migrant parents.

We’re urging everyone in our own immigrant-loving, immigrant-rich community of Greater Miami to make their cries of displeasure clear to you and your staff, Mr. President. We’ll make it easy: @POTUS; @VP; @SecMayorkas and @DHS.gov. Call congressional lawmakers at 202 224-3121.

Jen Psaki, your press secretary — master of understatement that she is — said the images from the incident at the border were “horrible to watch.” She followed up saying that she needed more information before it was determined whether any action would be taken against the agent, who charged his horse toward the migrant and brandished what Reuters news agency called a “lariat” and the El Paso Times called a “whip:” “The agent swung his whip menacingly, charging his horse toward the men in the river who were trying to return to an encampment under the international bridge in Del Rio after buying food and water in Ciudad Acuña, Mexico.”

We’re not sure if the border agent was channeling his inner “massa” from all those slave-era movies Hollywood churns out. But we’re pretty sure that he was just doing his job, following orders. Orders to round up these migrants so that they can be deported., Your orders, ultimately, President Biden.

America is in a bad mood. Granted, this is a subjective impression, but it is common, and there is no shortage of analyses of it, examining everything from social media to income inequality. I would like to try on for size...Read More

What exactly is Facebook trying to hide? There are just so many options to choose from.

Perhaps it's the new whistleblower claims that dropped Friday, alleging that Facebook constantly chooses growth and profits by ...Read More

Every week that goes by with Democrats unable to bully or bribe their two recalcitrant Senate colleagues into signing on to one of the worst pieces of legislation in modern history is a good week for America.

You know the old adage that a lie travels halfway around the world before the truth gets a chance to put its pants on. In the aftermath of a shocking rape aboard a SEPTA El train as it rolled into 69th Street Station in ...Read More

Let’s be clear: The Los Angeles City Council Redistricting Commission is not independent.

The federal bankruptcy system is morally bankrupt. The system has been abused by corporations and rich people to the point that it no longer upholds the mission it was designed for: providing a limited shelter from ...Read More