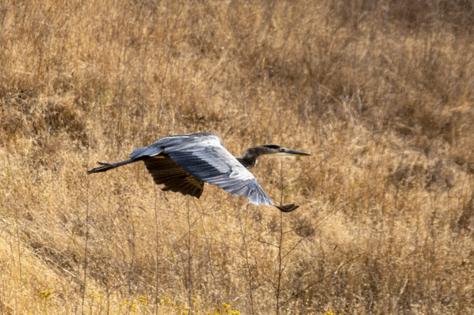 The California Coastal Commission is well known for protecting public access to the coast — the ability to walk onto a beach and not be stopped by walls, gates and signs illegally put up by beachfront property owners. Recalcitrant violators who refuse to remove a barrier can be fined up to $11,250 a day by the Coastal Commission.

But the agency doesn’t have the power to issue monetary penalties when it comes to protecting natural resources in the coastal zone. The commission has limited enforcement tools to stop landowners and businesses that violate the Coastal Act when they bulldoze wetlands, clear environmentally sensitive habitats, illegally grade land, pollute coastal streams or do other outlawed activities.

The agency can send letters ordering offenders to stop and instructing them to restore what they damaged, but those warnings are often ignored. As a result, damage continues or goes unrepaired for years.

The commission should not be hamstrung like that. Senate Bill 433 would give the Coastal Commission the authority to levy fines on people who damage the environment in coastal areas just as it does on those who violate coastal access requirements. The bill, sponsored by Sen. Ben Allen (D-Santa Monica), is supported by at least two dozen environmental groups. It easily passed both houses of the Legislature and awaits Gov. Gavin Newsom’s signature. He should sign it.

The commission acquired the power to fine coastal access violators in 2014. In the first five years of having that authority, the average time it took to resolve a case shrunk from three years to three months. And although the commission assessed about $25 million in penalties during that period, often just the threat of a fine was enough incentive for a violator to resolve a case.

Still, there are more than 2,600 open cases of all types of Coastal Act violations, and new cases are reported faster than they can be resolved. That’s all the more reason to empower the Coastal Commission to levy fines.

Here are some examples of cases that might have been resolved faster if the commission had the power to fine violators:

Great blue herons have suffered a loss of habitat for decades in Southern California, but a significant population of these stunning birds with long beaks and swan-like necks has staked out a stronghold in trees throughout Marina del Rey. The birds painstakingly build nests and often return year after year to them. But the birds can be messy, which is why there has been a history of extensive tree trimming in the city by property owners and managers designed to discourage their nesting, according to environmental advocates.

In 2013, tree trimmers cut down branches at an apartment complex, destroying 11 empty bird nests in the process. Eight years later, the commission and the complex property managers agreed to a resolution to restore the habitat. But if the agency had the authority to fine violators, the situation likely would have been resolved more quickly and could have deterred others from destroying nests as well.

In 2010, the commission’s enforcement staff learned that a landowner in Mendocino County removed trees from the rare Mendocino Pygmy Cypress Forest, which sits in ancient soil, then began experimenting with chemicals (including fertilizers) on the soil in a misguided effort to make the trees grow bigger. These activities are not permitted under the Coastal Act. For a decade, the agency has unsuccessfully tried to get him to stop.

Also along the Mendocino Coast, someone excavated 1,000 square feet of a steep slope that is prime habitat for the Point Arena mountain beaver, a federally endangered species that burrows into those slopes. For two years, the Coastal Commission has been in negotiations with the property owner, who has refused to do any remediation.

Two years ago, a property owner built a large tennis court and the foundation of an accessory dwelling unit along a hillside in the Santa Monica Mountains in Los Angeles County without getting authorization from the Coastal Commission. A stop-work order was ignored. The impacted property contains coastal sage scrub and chaparral that provide habitat for various species of animals.

In all of these cases, critical habitats for California’s flora and fauna might have been restored and further assaults avoided, had the agency with the authority to protect them had appropriate enforcement power. The land along the coast with its forests, wetlands and animal habitats are precious resources that should be maintained for all of us. Let’s empower the Coastal Commission to make sure they are protected.